New presidential primary voting data compiled exclusively by Breitbart News in the wake of the Indiana GOP and Democratic primaries on Tuesday suggests a huge swing toward Republicans in the general election as Donald Trump secures the GOP nomination, while Hillary Clinton struggles in her own party.

President Barack Obama won Indiana in 2008, then lost it to Mitt Romney in 2012. It was one of the few states Obama won in 2008 that Romney turned red again in the general election. 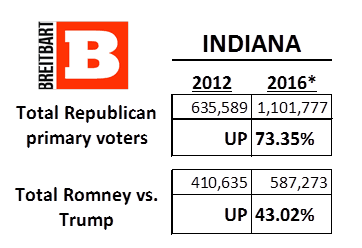 Clinton, who lost Indiana on Tuesday night to devout socialist Sen. Bernie Sanders of Vermont in another embarrassing performance for the likely eventual Democratic nominee, has seen a significant drop off in her own vote totals versus her 2008 campaign. She has dropped 349,294 votes, or more than 54 percent, from her 2008 performance in Indiana. 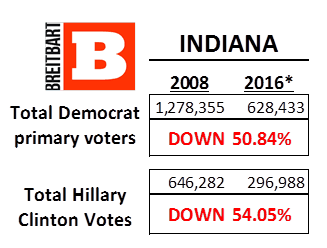 Indiana has 11 electoral votes in the electoral college, and if these primary totals are any indication those appear ready to go to Trump.

Breitbart News compiled this data analysis from information purchased from Dave Leip’s Atlas of U.S. Presidential Elections. That data, available at USElectionAtlas.org, is widely used by academics and media organizations including the New York Times, the Economist, Harvard, Columbia, Cornell, and many more reputable organizations.

The 2016 totals were based off the latest numbers put forward by the New York Times at 11 a.m. ET on Wednesday May 4, the day after the primary, so they will change slightly as final totals shift into place.

This piece has been updated.