As Americans gather with family and friends this Fourth of July weekend to celebrate our founding and the war that brought us our freedom, Speaker Paul Ryan offers the nation “a few conversation starters” — about himself. Linking to an interview he did with #NeverTrump leader Erick Erickson, Speaker Ryan sent out an email blast divulging 10 facts about himself that he thinks Americans may want to share with each other over fireworks and hot dogs this Fourth. We’ve provided the full text below. 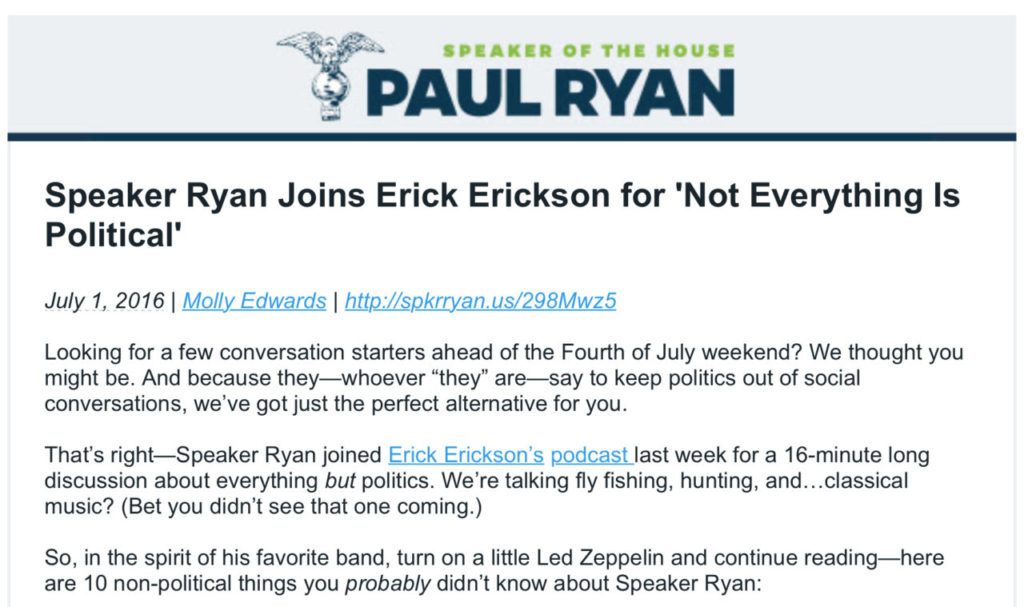 A screenshot from Speaker Ryan’s the email blast lest you think we’re having you on.

Looking for a few conversation starters ahead of the Fourth of July weekend? We thought you might be. And because they—whoever “they” are—say to keep politics out of social conversations, we’ve got just the perfect alternative for you.

So, in the spirit of his favorite band, turn on a little Led Zeppelin and continue reading—here are 10 non-political things you probably didn’t know about Speaker Ryan:

1. When he was a child, he practiced fly fishing in a field.

“When I was a kid, I practiced in a field—in a park. We had this little park in our neighborhood and I’d just go practice up there. It’s all about getting the cast right.”

2. His favorite sport is bow hunting.

3. He takes his family to Deer Camp.

“I grew up doing Deer Camp, which is during opening weekend of deer season . . .  I hunt in the morning by myself and then I hunt with kids in the dusk.”

4. Homer is his favorite character on The Simpsons.

“Troy McClure’s not so bad—he’s a good side character. I mean, you can’t get better than Homer—what can you say? Homer’s the best.”

5. He listens to Beethoven.

7. When he came to Washington, he figured he’d become an economist.

“Jack Kemp, who I adored, was looking for a young staff economist—basically somebody to do his economic policy work at this new think tank he was forming called Empower America. And he hired me to do that, and I thought all along, ‘I’ll do this for a few years—you know two years, three years.’ And then I wanted to go further my education in economics and go into the field of economics.”

8. But, as time would tell, Jack Kemp inspired him to do something different.

9. He was reading Milton Friedman books at the ripe age of 16.

“My parents were Milton Freedman fans so I read Free to Choose when I think I was like 16 or something like that.”

10. And finally, you can take the guy out of Wisconsin, but…

“I drink Miller Light and Pabst Blue Ribbon . . . it’s what we drink where we come from. You know, you can take the guy out of Wisconsin, but you can’t take the Wisconsin out of the guy.”

“This is the first [conversation] I’ve had like this in a long, long time,” the speaker said in closing. We think conversations like this ought to happen more often—don’t you?