Hillary Clinton needed to be physically helped up a moderate flight of stairs by her team of staffers and handlers, according to campaign-trail photos that made the rounds on the Internet Sunday.

Reuters and Getty photographs captured Hillary Clinton, 68, struggling to make it up the stairs, either as a result of her fragile body or perhaps because her well-documented brain injuries make it harder for her to transport herself through daily life activities. The photos gained wide circulation on the Internet Sunday. The photos were taken in February as Clinton was campaigning in South Carolina. 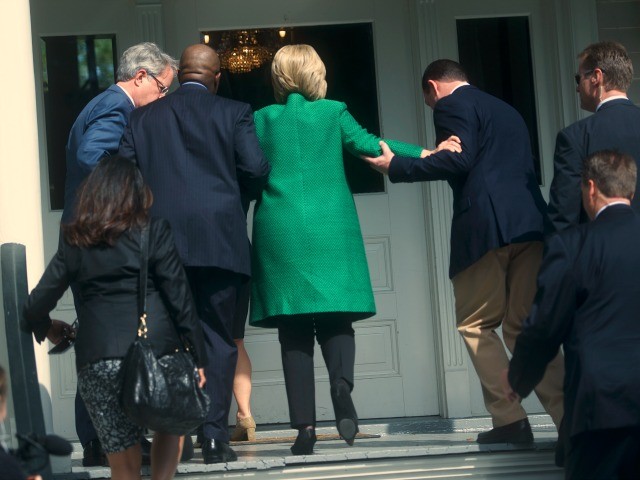 Breitbart News has extensively reported on Clinton’s various health problems, including what could be a lingering brain condition that appeared after she suffered a blood cot.

Donald Trump is hammering Clinton for “short-circuiting” when she had to answer questions about her private email scandal, which she clearly did not answer truthfully.

Clinton’s disappearance from the debate stage last month left people speculating that the former First Lady took a long bathroom break, but now a law-enforcement source with inside connections is alleging that Clinton was missing from the stage due to health issues stemming from a previous brain injury.

These long-lasting symptoms stemming from a concussion and blood clot, according to a neurologist, suggest Clinton is suffering from post-concussion syndrome, which can severely impact her cognitive abilities.

All that said, however, Clinton’s campaign maintained to Breitbart News that she is in good health and can serve as President of the United States.

Clinton previously fell on the stairs in 2011:

She also fell in 2009 when she was going to President Obama’s White House, necessitating surgery.