MELBOURNE, FL – If Republican presidential nominee Donald Trump’s debate performance on Monday left much to be desired, it didn’t show at a rally on central Florida’s east coast a night later.

Trump drew perhaps his biggest crowd in Florida’s I-4 corridor at the Melbourne International Airport before a crowd of thousands under a backdrop of threatening weather.

After giving remarks in remembrance of Miami Marlins pitcher Jose Fernandez and legendary professional golfer Arnold Palmer, Trump hit his usual chords on the economy, keying in on trade in particular.

“You can’t allow TPP to happen,” Trump declared. “It will be a catastrophe. Nothing will be as bad as NAFTA, but this one will be close. A vote for Hillary Clinton is a vote for TPP and the destruction and continued destruction of American jobs. America’s jobs are in deep trouble.”

In addition to trade, Trump hit Clinton on being the candidate of yesterday.

“It’s been 30 years of disappointment on foreign policy, on domestic policy, on helping women, on helping children. She’s done nothing. She had in the Senate — she had a couple of named bills and she named a post office, and I think that she named a road. she named something. She did nothing and she was terrible. The only thing that she succeeded at is helping her donors and covering up her crimes. That’s what she’s succeeded at,” he said as the crowd broke into chants of “lock her up.”

“Her single greatest achievement in my opinion will go down as getting away with the horrible crime that she committed with her classified information and her phony email and her illegal servers, and getting away with that when nobody else has and lives have been destroyed,” he added. “Let’s see what happens.” 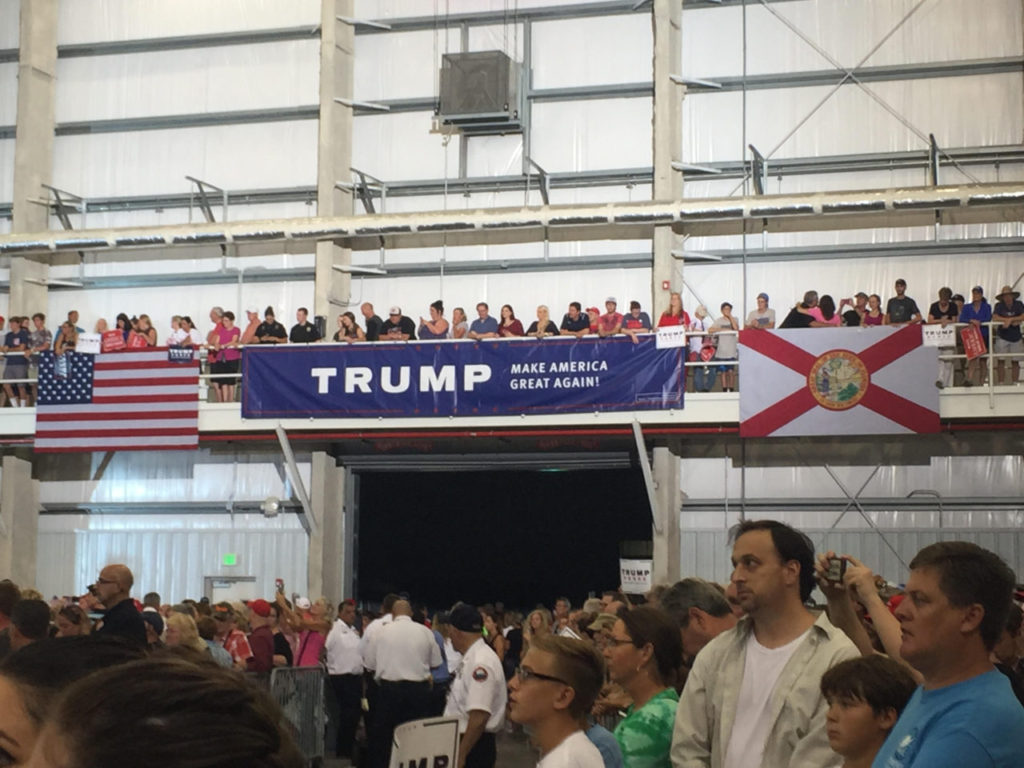 The GOP nominee reflected on his visit to the Little Havana community in Miami earlier and vowed to push for reforms in communist Cuba.

“I will be a voice of freedom that includes freedom for people in Cuba,” he said. “Cuba is not — it’s not right what’s going. It’s not right.”

“This afternoon I spent a lot of time in Little Havana — an amazing place. President Obama had a one-sided deal for the Castros for nothing in return,” he continued. “Did you ever see this guy make a decent deal for this country? And you know what? ‘Crooked Hillary’ will be worse. She’s going to be worse than Obama, mark my words. She’s going to be worse than Obama and that’s why on November 8, you can’t let it happen.”

Trump went on to use the circumstances in Cuba as a segue to attack what he deemed to be the corruption of Hillary Clinton and her husband former President Bill Clinton.

My administration will be a voice against oppression in this hemisphere. Those who lived in these countries also understand the dangers of corrupt politicians like Hillary Clinton, who used government power for personal profit. Bill and Hillary Clinton were paid $150 million for speeches to special interests since Bill left office.

Bill Clinton was being paid to give speeches by many of the same people who had matters before the State Department while Hillary was secretary of state. Clinton donors got favorable treatment and access to the State Department. It’s called pay for play.

Our secretary of state can be bought or bribed or whatever you want to call it or sell trades to the government or favors or access. And I’ll tell you, when that happens our whole system is threatened and we have to stop it on November 8.

Remember when you go to vote, don’t vote for “Crooked” Hillary, just put it in your head, “Crooked” Hillary. She is a crooked one. America can never elect a candidate like Clinton who put her public office up for sale. Hillary Clinton tried to cover up her crimes by deleting 33,000 emails after a congressional subpoena and destroy her phones, some of them with a hammer.

Trump took aim at the so-called establishment by pointing to Election Day and promising a winning outcome.

This is Trump’s sixth appearance in the Sunshine State since the Republican National Convention, suggesting the campaign sees the state’s 29 electoral votes as essential in securing the presidency. In addition to the Melbourne rally, Trump has appeared in Pensacola, Ft. Myers, Tampa, Kissimmee, and Ft. Lauderdale.

Trump lobbied attendees to get out and vote and he is going to need every vote he can get. He is currently locked in a dead heat with Clinton in the state of Florida. According to the Real Clear Politics average of Florida polls, Clinton leads by just six-tenths of a point in the closing week of September.