With non-coincidental timing, Zeid Ra’ad al Hussain, the United Nations’ “High Commissioner” for “Human Rights”, added that electing Mr. Trump would be dangerous for the planet.

It is worth recalling why the GOP in Congress decided that it would no longer drift along with the imagined (and imaginary) scientific “consensus” that manmade global warming is or may become a dangerous global crisis.

Some years ago, during testimony to the GOP caucus on a House global-warming committee before the full meeting, one of us displayed this graph from the Fourth Assessment Report of the UN’s climate panel, the IPCC: 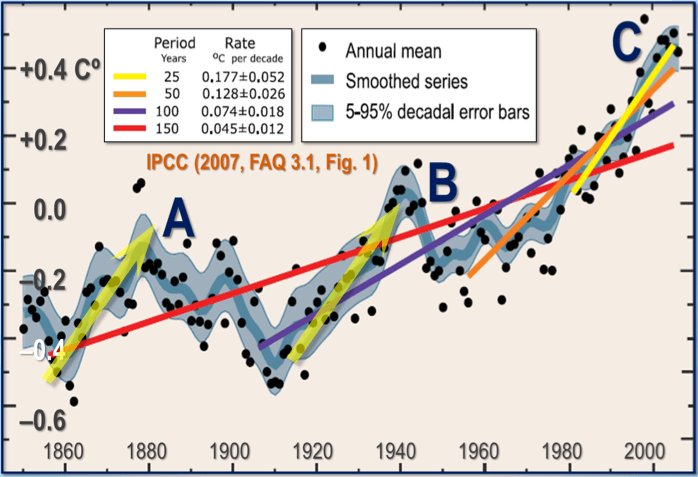 John Linder, the GOP ranking member on the committee (for the House was still under “Democrat” control at that time) took one look at the graph and said, “They can’t have done that!” He turned to his fellow-members and said, “Gentlemen, we have now seen all we need to see. The UN and its climate panel are anti-scientific and untrustworthy.” And so they are. The GOP has had no time for these scamsters ever since.

Both of us have had long experience of tackling the falsehoods peddled by Gore, Clinton and the self-serving UN Let us knock some of them on the head.

First, the rate of global warming has not been accelerating. In fact, it is little more than half of what the UN had predicted in 1990, even though, despite the squandering of hundreds of billions on the climate scam, CO2 emissions are rising faster than predicted.

Secondly, Hurricane Matthew was no worse for global warming. Until it struck the U.S. coast, no hurricane of category 3 or more had made landfall for 4001 days – the longest period without a major hurricane landfall in the U.S. since records began almost 150 years ago. Warmer weather reduces the temperature differentials that drive storms, making severe hurricanes less likely.

Thirdly, sea level, which Gore and Clinton said was a big issue for Florida’s coastline, has not been accelerating, though the south-eastern seaboard of the U.S. has been subsiding.

Fourthly, there is no “consensus”. Two of us were co-authors of a paper printed last year that examined 11,944 peer-reviewed papers on climate and related subject published in the learned journals over the 21 years 1991-2001. Just 41 papers – 0.3 percent of the sample – went as far as to say that what little global warming there has been in recent decades was mostly manmade.

In 2007, one of us ran ads in major daily papers throughout the U.S. challenging Al Gore to a debate about global warming. He was too terrified to accept. In 2009, one of us asked him how much global warming would be prevented if the U.S. stopped emitting CO2 altogether. Gore could not answer: for the truth is that global temperature would barely change.

The cost of compliance with the Paris climate agreement has been estimated at $90 trillion over the next 14 years. Yet that monstrous sum – four times the entire federal debt – would not even reduce global temperature by a tenth of a degree.