NEW YORK CITY, New York — Donald J. Trump, the Republican nominee for president, will lay out a specific and detailed vision for the United States of America in a Saturday address that will focus on his closing argument for the campaign and on his first 100 days in office should he win, aides told reporters late Friday night.

The focus, Trump aides told reporters on a conference call, will be on what working-class and middle-class Americans need and want.

The contrast that will set up, they say, is sharp when it comes to Trump’s opponent Democratic nominee Hillary Rodham Clinton: She’s fighting for the special interests, lobbyists, banks, corporations, Wall Street, and globalists, while Trump is fighting for the average American.

The difference between Trump’s vision and Clinton’s, the Trump aides say, will focus on how her support for “top-down, trickle-down globalism” doesn’t help ordinary Americans who are struggling and seeing their wages flatline if they’re lucky enough to still have a job. Clinton, they say, does not care if a job is created here in America or in another country as long as her donors benefit in the end.” 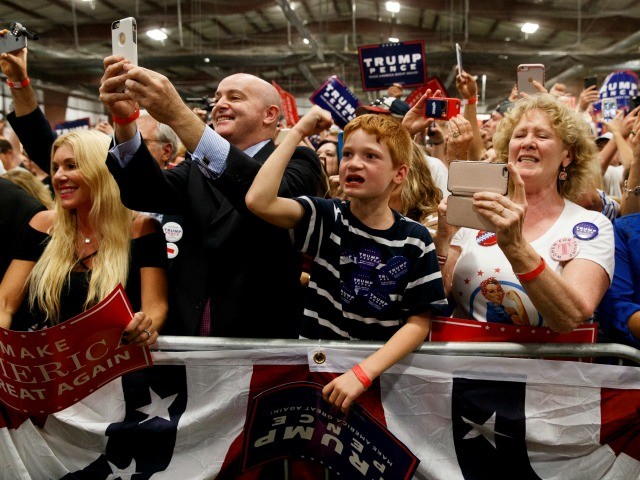 Other senior Trump aides emphasized the fact that Trump will lay out his agenda for his first 100 days in office in the Gettysburg address on Saturday morning at 11 a.m. ET.

The speech will focus on national security, law and order, job creation, trade policy, ethics reform, regulatory reform, economic stimulation, and more central themes from his campaign. The Trump team says that the campaign has been in contact with congressional and military advisers to Mr. Trump on the matter.

“I think you’re going to see, continuing with the same kinds of principles he’s been outlining, you’re going to see some additional policy details on some of those points,” a senior Trump said. “Everything is just consistent with and part of what his vision has been the whole campaign and the core things we think we can get done in the first 100 days.”

The event will be Trump’s fourth in Pennsylvania over two days, as he held three rallies there on Friday.

Just returned from Pennsylvania where we will be bringing back their jobs. Amazing crowd. Will be going back tomorrow, to Gettysburg!