No doubt it comes as an enormous relief to Democrats that a new survey from the Kaiser Family Foundation says most Americans are not calling for the demise of Obamacare.

The foundation, which has long been one of the loudest supporters of the federal program, says its poll shows that Americans want to double-down on government control of health-care — and get cheaper drugs too! — just as the new media are psyching themselves to admit the program is in a double-digit death spiral.

When asked about which health-care issue should be considered the most important for the next president and Congress, drug prices came in first — followed by a number of other consumer issues related to health care, such as making sure that insurance plans covered enough doctors and hospitals to be useful.

Nearly three-quarters of respondents said making expensive drugs affordable to chronically ill people should take priority. More than half said taking government action to lower drug prices should be at the top of the list.

In contrast, repealing the Affordable Care Act was ranked as a top priority by 37 percent of people. Repealing elements of the law, such as the requirement that individuals without insurance pay a fine or that companies with 50 employees or more offer insurance or pay a penalty were also ranked as a top issue by a minority of respondents.

Normally pollsters total up the number of people who want any specific part of the law repealed to produce a total percentage of voters “unhappy with the law” or “favoring full or partial repeal.”

The foundation’s questions weren’t asked in a way that would allow such easy addition, yet its list of health care priority questions show broad opposition to Obamacare’s foundations 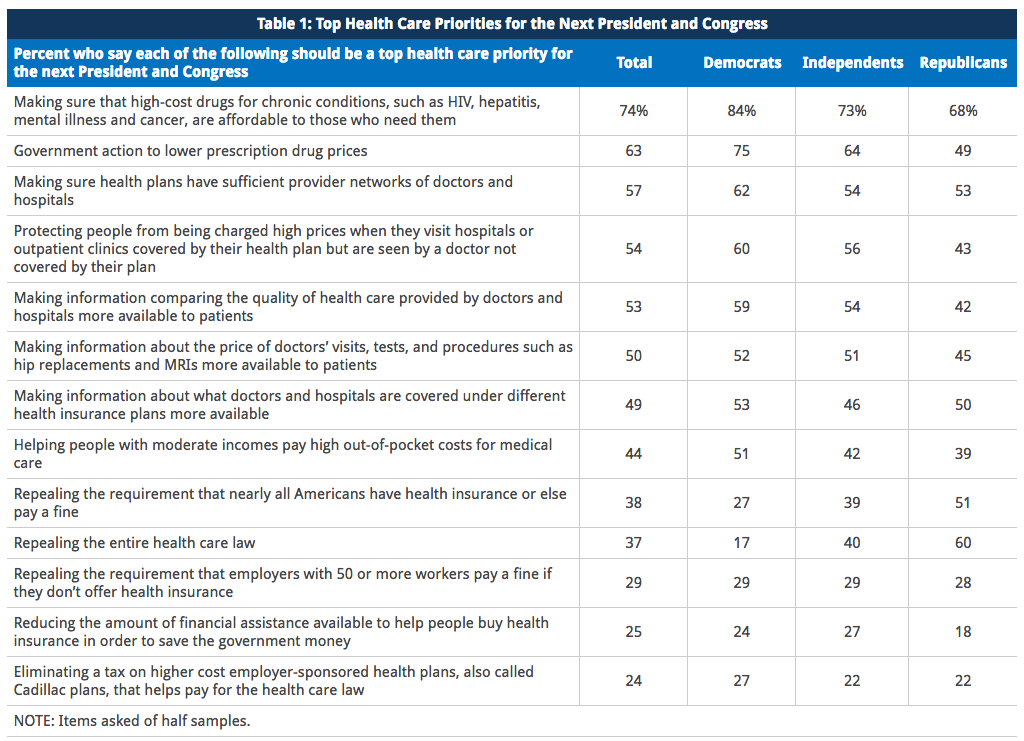 Yes, the leading questions shows that 74 percent of the public want free stuff — ‘affordable drugs’ – while the partly hidden lower questions show almost four in 10 say they want to chop the legs off the program.

“Repealing the requirement that nearly all Americans have health insurance or else pay a fine” drew 38 percent support, and that’s tantamount to full repeal of the Affordable Care Act, since even its die-hard defenders admit it would not survive loss of the individual mandate.

It would also be noted that priorities such as “making sure insurance plans cover enough doctors and hospitals to be useful” are impossible under the Affordable Care Act, so anyone who supports that priority is indirectly calling for repeal of ObamaCare, whether they realize it or not.

The Kaiser Family Foundation theorizes that not enough people are ObamaCare exchange customers to appreciate its alleged virtues – 10.4 million, compared to 154 million who still get insurance through their employers. But that’s also the reason ObamaCare’s collapse isn’t ringing the bell at the top of the voter priority carnival game.

Another way of putting it is that the elements of our health insurance system that were working well before ObamaCare came along are still working, and those elements cover over 90 percent of consumers. An insane amount of money was spent for very minimal benefits, and the “unexpected side effects” have hurt more people than ObamaCare helped.

Of course the law’s supporters want us to just think about the benefit of increased enrollment – which is far less than originally predicted by ObamaCare’s designers – and ignore the costs. That’s how Big Government programs are always sold.

How about a new and better poll that asks if the money Barack Obama wasted on his health-care takeover should have been spent on reducing prescription drug prices instead?

The craptacular website alone cost a billion dollars to design, crash, reboot, crash, redesign, and repair. The individual mandate was a thinly-disguised middle-class tax increase of staggering proportions… and ObamaCare’s con artists want to make it even bigger now, because too many Americans persist in paying the penalty instead of buying overpriced ObamaCare policies. What might we have accomplished by putting that money into the health-care priorities of the Kaiser poll, instead of wasting it on a Democrat power grab?

The Post notes that voters see health care as a lower priority than issues like the economy and foreign policy, on both sides of the partisan divide. That certainly doesn’t stop the elite from ramming through its preferred legislation when it wants to take over part of the private sector, or push something beloved of the Beltway but of little interest to voters, such as amnesty for illegal aliens or global warming.

The Kaiser survey was conducted between October 12 and 18, which is before the latest news about sky-high premium increases was absorbed by the public, in the middle of a hot and humid presidential campaign where ObamaCare hasn’t been a major issue (which was a mistake on the part of the Trump campaign.) Interest levels might perk up a bit after sticker shock really kicks in next year.

When the Democrats were pushing ObamaCare, they didn’t care that most people were satisfied with their health care. They focused on the most unhappy campers, and personalized the issue with faces, names, and individual tales of hardship. That’s a tactic today’s reformers should reverse. Put some people who just got slammed with 100 percent premium hikes onstage, and ask if they think repealing the Affordable Care Act is a high priority.

Conservatives will never have the media or bureaucratic megaphones needed to manufacture crisis-level intensity for an issue the voters don’t consider high priority, but they still need to lay the groundwork for reform by presenting both the problem and good solutions. Liberals would never look at a poll showing 40 percent support for imposing a Big Government program and consider it a lost cause.

One of the Kaiser questions indicates that most voters don’t understand what Donald Trump proposes to do about health care reform. That’s a big problem, and it reflects the Republicans’ long inability to unite behind a repeal and reform plan. (They’ve floated a lot of proposals without unified support over the years, a lack of unity which ironically helps President Obama falsely claim they have no alternative ideas at all.)

Polls like this should be useful battle maps for reformers, who won’t throw in the towel even if Hillary Clinton wins the presidential election.

ObamaCare will still be a bigger disaster in 2020, and Democrats should never be let off the hook for forcing it through on a party-line vote, with all sorts of ugly tricks and payoffs. Hammer that point that we could have the reforms voters really want, if we weren’t wasting billions on a system hardly anyone really likes, and that even benefits like expanded coverage can be accomplished far more efficiently.

ObamaCare has proven itself just about the worst possible solution to the problems that existed before 2010.

Republicans must use Obamacare’s chaos to argue for pro-market, pro-American reform, if only because Democrats will use Obamacare’s failures to impose even more miserable, anti-market, Big Government solutions to the new problems they happily created.