Several anti-Donald Trump protests emerged in New York, DC, Chicago, California, Boston, Seattle, and other major cities Wednesday night, with demonstrators blocking and cutting off traffic among calls of “Not my president!”

An aerial look at the Trump protests happening in Chicago right now (via @Zimmerino) pic.twitter.com/elCVqJiuoa

Mexican Flag Waving Fu*k Trump Protester: Trump is not what America stands for, Not My President https://t.co/skmcd2FHsZ @RebelPundit #maga

New York protesters also blocked traffic, marching through Times Square and cutting off buses while alternating between calls of “Not my president” and “Whose streets? Our streets!”

NYPD officers attempted to disperse the crowds, announcing on a loudspeaker that “if you unlawfully obstruct pedestrian traffic or walk in the street or roadway, you may be placed under arrest.”

Protesters continued on foot towards Trump Tower, where NYPD officers had cordoned off the entrance and attempted to block people out.

What the anti-Trump protest looks like coming out of Trump Tower. "We reject the president elect" pic.twitter.com/pYpROhEpJ3

Rachel Maddow, who is on the scene in New York City, claims that protesters have been “coming in waves”, adding that it was “up to the fourth or fifth wave now.”

They're coming in waves. We're up to the fourth or fifth wave now.

Protesters burn an American flag outside of Trump Tower in NYC. BuzzFeed News is streaming live from the protests 👉 https://t.co/BRVzrTIf3A pic.twitter.com/MC5b6FCQa3

In Boston, protesters showed up at the Boston Common, where “thousands” of demonstrators allegedly shut down the streets and screamed signature chants of “Not my president.”

Hundreds are now gathered on the Boston Common and many more are streaming in to protest Donald Trump. pic.twitter.com/KZTjPPyXvW

A flood of thousands continue to shut down streets in Boston as they protest Trump's win #wcvb pic.twitter.com/SAl8xlF0O6

The crowd of Trump protesters has swelled here on the Boston Common. pic.twitter.com/lAr4tXx2iI

Like the other cities, “thousands” of San Francisco protesters also blocked traffic, with chants of “Black Lives Matter” echoing the streets.

Scene on the ground from the #SanFrancisco #Trump protest pic.twitter.com/RbiLNIBO5s

Friendly reminder during anti-Trump protest marching into the Castro in San Francisco pic.twitter.com/lUatOZoaz4

Crowds chanting "not my president" during anti #Trump protest in #SanFrancisco @abcnews pic.twitter.com/e62oo7Sxrh

Solidarity and resolve at Market Street San Francisco anti-Trump #protest And so it begins pic.twitter.com/x0LlosRpha

In Washington, D.C. protesters burned the American flag and chanted “No racist USA, No Trump, No KKK”.

'No racist USA, No Trump, No KKK,' being chanted on the way to the White House. #Postelection #DC #Protest pic.twitter.com/53ekKgeEbK

Police officers were also forced to erect a barrier surrounding the Trump hotel in D.C.

Protest against president-elect #DonaldTrump happening now at the Trump hotel in #DC pic.twitter.com/LVXkDjQOaD 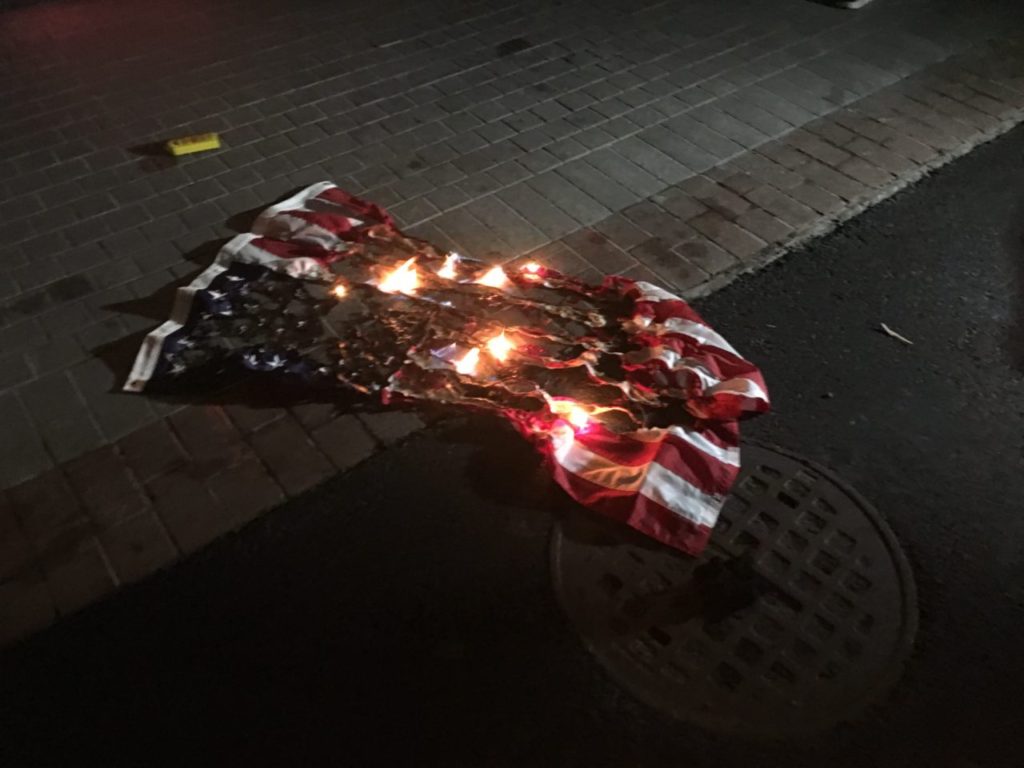 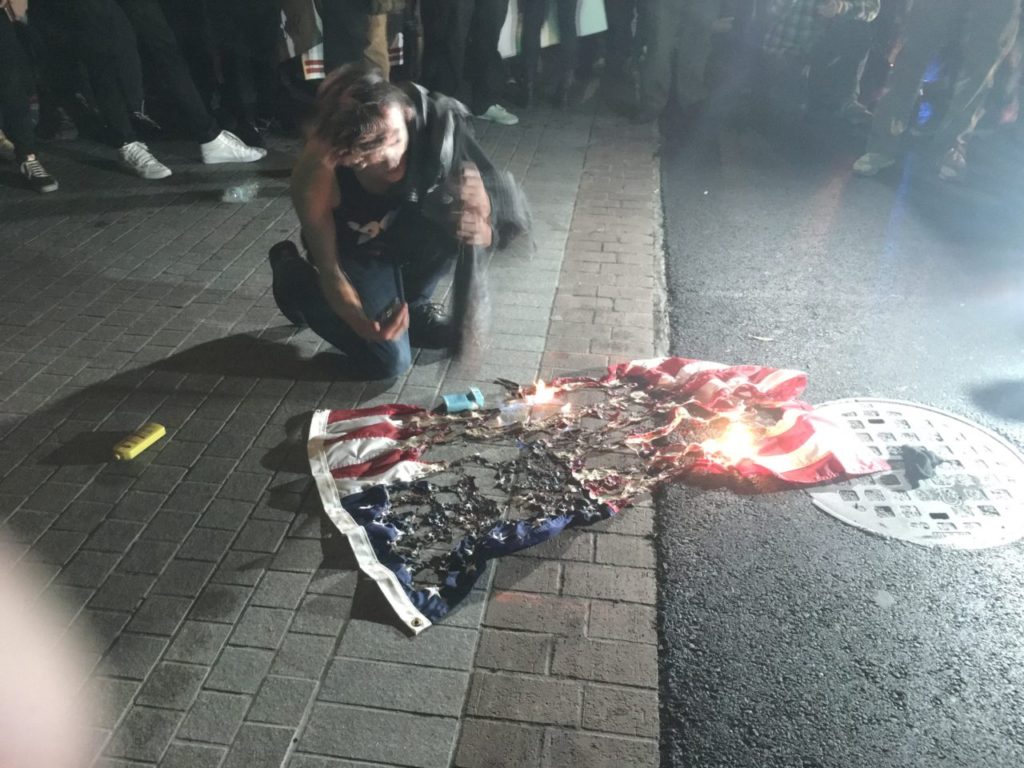