The nation’s murder rate is rising at its fastest pace since the 1970s, says an analysis published by the Economist.

The magazine compiled murder stats for the 50 U.S. cities with the highest murder rates, and found that in 34 of the 50 cities, murders rose during the final year of President Barack Obama’s tenure.

“Three cities experienced a spike in deaths sharper than the 58 percent [spike] suffered by Chicago,” the Economist writes. “Since cities tend to reflect the country as a whole, this suggests that the murder rate is rising at its fastest pace since the early 1970s.”

The Economist’s admission about the rapid growth in the murder rate comes as establishment media sites lash at President Donald Trump’s Feb. 7 statement that the murder rate “is the highest it’s been in 47 years.”

“The reality is that the US murder rate in 2015, the latest full year available, was lower than it was 45 years prior,” CNN responded.

But CNN was also forced to admit that “the US did experience its highest one-year increase in the murder rate in half a century between 2014 and 2015.”

During the 1970s, as judges and legislatures rolled back criminal penalties, the crime rate grew out of control and reshaped national culture. Hollywood produced a flood of vigilante movies (“Dirty Harry,” in 1971, “Death Wish” in 1974, and Taxi Driver” in 1976), “The Warriors” in 1979 and “Escape From New York”  as 1981 the public’s fear of crime shifted national politics and helped elect President Ronald Reagan in 1980

According to the Economist’s data, blacks are the most likely to be victims of homicide in the 50 cities surveyed. 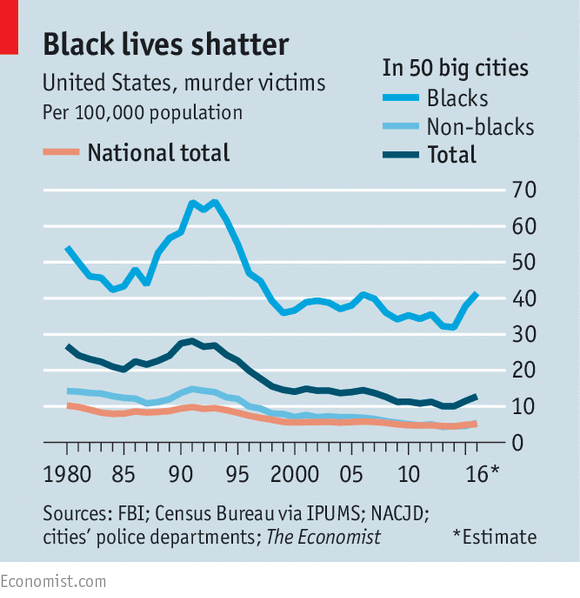 FBI crime statistics found black or African American perpetrators committed 51 percent of all murders and non-negligent manslaughter offenses in 2015 alone. And homicide is a leading cause of death for young black men, as a Wall Street Journal analysis showed, with some 90 percent of black homicide victims dying at the hands of black offenders.

The Economist dismisses arguments that the “Ferguson effect” is spiking crime by deterring determined police action. But crime did begin to rise in 2014 after Obama began his  “stigmatize-and-federalize” campaign against state and local police, reversing a decades-long decline in crime, according to the FBI.

It also cautions readers to think about the “context” of these disturbing numbers: “Despite the recent uptick, the murder rate in our 50 cities was lower in 2016 than it was in 2007, and for the 26 years before that.”

The FBI’s 2015 crime report revealed an incredible 10.8 percent increase in murders from 2014 to 2015, the largest increase in a single year since 1971, along with a 3.9 percent overall increase in violent crime. Figures for the 2016 FBI crime report will not be available for several months.