Reebok has once again banked on political controversy by taking Senate Majority Leader Mitch McConnell’s words, which he used to silence Sen. Elizabeth Warren (D-MA) during her rebuke of Sen. Jeff Sessions (R-AL) in his attorney general confirmation hearing, and placed them on a woman’s T-shirt in support of Warren.

The T-shirts sold out within hours: 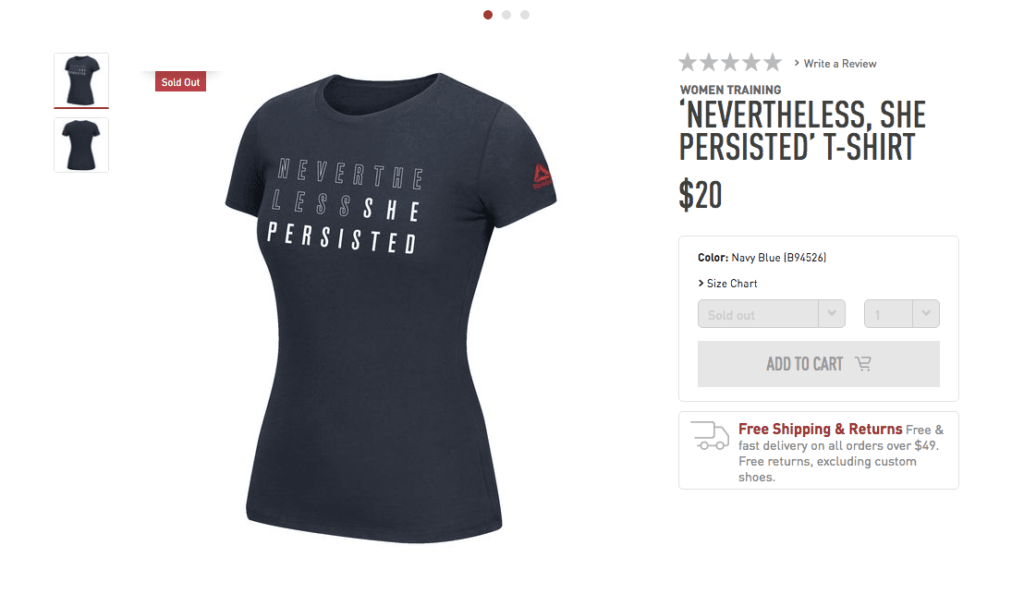 “We watched this week as our own state[‘s] Senator was ‘silenced’ by her critics for doing her job,” Dan Mazei, a senior director at Boston-based Reebok, told Syle.Mic. “As dismayed as we were, we were also reignited by the rallying cry of, ‘Nevertheless, She Persisted.'”

Mazei reportedly said the shirt was meant to “inspire women everywhere from the Senate floor to the starting line of a marathon and everywhere in-between — all the places women have been obstructed from seeing through their ambitions. But, they persist.”

The shirt sold for $20. On its website, Reebok wrote, “A rallying cry was born on February 7th, 2017 for women who refused to be silenced.” It added, “For every ‘Nevertheless, She Persisted’ t-shirt sold, Reebok will donate $20 to Women’s March.”

The Women’s March was organized and designed as a grassroots movement to “send a bold message to our new administration on their first day in office, and to the world that women’s rights are human rights.”

This is not the first time Reebok has profited from a controversy surrounding women’s rights. Last year, they launched the #PerfectNever campaign with model Gigi Hadid several weeks after she punched a well-known prankster who manhandled her in Italy.

As for “Nevertheless, She Persisted,” Sen. McConnell (R-KY) initially made the co-opted statement on the Senate floor Tuesday night. “She was warned. She was given an explanation. Nevertheless, she persisted,” he said of Warren, in defending his decision to invoke Senate Rule XIX which prohibits senators from impugning each other.

Warren had attempted to read from a letter the late Coretta Scott King wrote in 1986 criticizing Sessions over his nomination to be a federal judge.

Although Warren has not officially announced her candidacy, her intentions to run for president in 2020 seem to be apparent, as are her attempts to rally Democrats in her increasingly divided party behind her. “Nevertheless, She Persisted” has become a Warren slogan.

At the Grammys Sunday night, singer Katy Perry sported a “Persist” armband during the performance of her new hit single “Chained to the Rhythm.” Perry, who endorsed Hillary Clinton for president, wore a white pants suit and a Planned Parenthood symbol on her lapel:

During her performance, Perry walked through a series of white picket fences, a likely reference to President Donald Trump’s proposed wall along the U.S.-Mexico border:

Towards the end of her performance with Skip Marley, the white picket fence — a classic image associated with the “American Dream” — was taken apart, and in the background, the opening lines of the U.S. Constitution were projected onto the wall. “We the People” was most prominently displayed.

At the end of her performance, Perry shouted, “No hate!”