A British SAS sniper armed with an American gun took out an Islamic State jihadist in Mosul from a distance of 1.5 miles.

The sniper was using a  CheyTac M200 Intervention, which is made in South Carolina, USA.

The Daily Mail reports that the ISIS jihadist was himself a sniper and was moving from position to position to find the place from which to shoot infidels when the SAS sniper shot him in the throat. Because of the distance between the jihadist and the SAS sniper, “it took three whole seconds for the bullet to reach its target.”

The the UK’s Daily Star quoted a source who said:

It was a classic counter-sniper operation. The ISIS gunman was moving all the time to get into the best position to get a kill.

It was like a game of cat-and-mouse and at one point the SAS almost gave up, believing that the terrorist had gone to ground.

Just as the light was beginning to fade the gunman moved into what he thought was a safe location and lifted his rifle up into his shoulder before the SAS shot him dead.

The SAS sniper used a CheyTac M200 Intervention rifle (pictured below), which CheyTac describes as a “truly nostalgic rifle” which is “considered the most unique long-range rifle system today.” 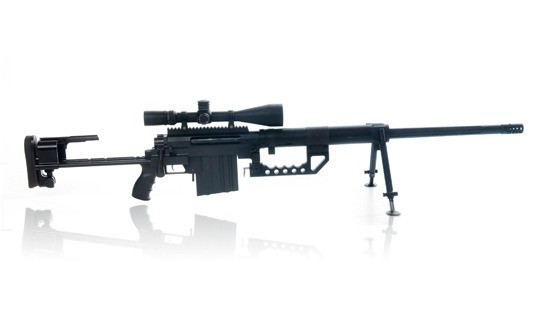 It comes as no surprise this system is ranked the #1 sniper rifle in the world by The Military Channel’s top ten sniper rifles, with its sub-minute of angle accuracy and ability to easily engage targets that are 2500 yards and beyond! Combined with CheyTac’s USA Patented Balance Flight Projectiles®, you have a rifle that delivers greater range and accuracy with less bullet drop and drift than any other cartridge in the World.

The SAS sniper remains unnamed, but the Star reports that he is “a sergeant who was a veteran of the wars in Iraq and Afghanistan.”