Page’s criticism came in the form of a letter sent to the Senate’s Select Committee on Intelligence and shared with Breitbart News.

Astonishingly, Comey accused the new Administration today of attempts to supposedly “defame” him.  This allegation is hard to fathom given the fact that this baseless witch hunt he once led has severely defamed the President of the United States, myself, and many other supporters of the Trump movement.  As you are undoubtedly aware, this has remained as one of his primary de facto missions for close to a year already.  Of course, this was all done in highhanded support of his partners that appointed him during their regime’s term in office.

Page was referring to Comey’s claim on Thursday that the Trump administration “chose to defame me, and more importantly, the FBI by saying that the organization was in disarray, that it was poorly led, that the workforce had lost confidence in its leader.” 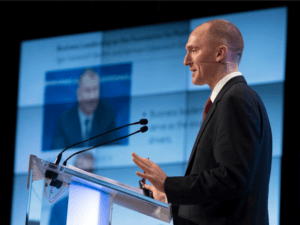 “Those were lies, plain and simple,” Comey added.

Page continued in his letter:

Essentially admitting that today’s hearing was tantamount to the standards of high-school gossip, on multiple occasions Comey admitted that he “could always be wrong”.  This demonstrated the same standard of highly-biased, politically-driven sloppy analysis which has misguided these proceedings from their very beginning during the Obama Administration.

On Thursday, this reporter documented nine times that Comey stated at the Senate hearing that he could be “wrong” on various matters, including central points in the probe of alleged Russian interference in the 2016 presidential election.

On April 11, the Washington Post cited “law enforcement and other U.S. officials” stating that, as part of its investigation into alleged Russian collusion, the FBI obtained a secret FISA court order last summer to monitor Page’s communications.

The newspaper allowed that Page had not been accused of any crimes. It reported that the FISA court renewed the 90-day warrant on Page more than once, according to the officials.

The U.S. government has not responded to a Freedom of Information Act request from the American Civil Liberties Union (ACLU) seeking information on why Page was surveilled.

In April, CNN reported that the controversial 35-page dossier on Trump compiled by a former British intelligence officer served as part of the FBI’s justification for seeking the FISA court’s approval to clandestinely monitor Page.

In his testimony last month before the Senate Judiciary Committee hearing on FBI oversight, Comey repeatedly refused to answer questions about his agency’s ties to the dossier, including whether it was used in the Russia probe.

The partially discredited dossier contains wild and unproven claims that the Russians had information on Trump and sordid sexual acts, including the mocked claim that Trump hired prostitutes and had them urinate on a hotel room bed.

The document was authored by former intelligence agent Christopher Steele, who was reportedly paid by Democrats and anti-Trump Republicans to investigate Trump.

Last month, Steele conceded in court documents that part of his work still needed to be verified.

Citing current and former government officials, the New Yorker reported the dossier prompted skepticism in the intelligence community, with the publication quoting one member as saying it was a “nutty” piece of evidence to submit to a U.S. president.

The Steele document, which Page refers to as the “Dodgy Dossier,” makes the unsubstantiated claim that Page met with Russian officials as an envoy for the Trump campaign to discuss policy issues and topics related to alleged Russian interference in the 2016 presidential election. Page has steadfastly denied meeting any of the officials mentioned in Steele’s dossier and he says he never served as an envoy for the Trump campaign.

In his letter Thursday to the Select Committee, Page charges:

Despite the fact that the 2016 Dodgy Dossier has been widely reported as a central foundation of the Clinton-Obama-Comey regime’s domestic political intelligence operation2, today’s presenter advanced their failed agenda by only offering the standard refrain: “I can’t talk about that in open session.”

Page’s role in Trump’s presidential campaign has long been seemingly exaggerated in the news media.

In an interview with the Post’s editorial board last March, Trump briefly mentioned Page as a member of his foreign policy advisory team. Trump spokeswoman Hope Hicks clarified that Page’s role was “informal.”

Page has been cited in various news media reports as an “ex-foreign policy adviser” to Trump’s campaign and a “Trump associate.” An article in the New Yorker recently claimed he was a member of Trump’s “inner circle.”

In a previous letter to the House Intelligence Committee, Page states that he never met Trump and that he was an “informal, unpaid campaign volunteer” and a “very junior member of the Trump movement who didn’t actually have any direct one-on-one discussions or meetings with our candidate.”

Page charges that the news media has been inflating his relationship with Trump’s presidential campaign in an effort to tarnish the U.S. president.