Have you ever wondered what kind of sadistic, totalitarian mentality you might need to want to carpet the countryside with bat-chomping, bird-slicing eco crucifixes in order to save the planet from an imaginary problem?

This book, unearthed by David Archibald at American Thinker, offers a clue: 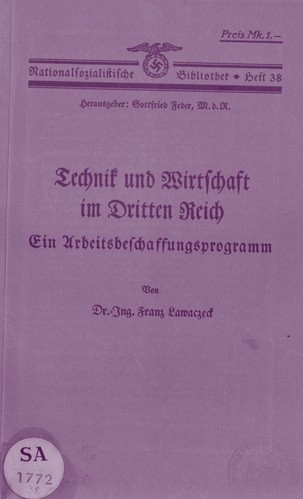 It’s by a Nazi inventor and industrialist called Dr. Franz Lawaszeck, whose proposed solution to Germany’s energy problems in the 1930s was the wholesale adoption of wind turbines.

In his book, he writes:

Wind power, using the cost-free wind, can be built on a large scale.  Improved technology will in the future make it no more expensive than thermal power.  This is technically and economically possible and opens up a quite new life-important type of power generation.  The future of wind is no longer small windmills, but very large real power plants.  The wind towers must be at least 100 m [330 ft] high, the higher the better, ideally with rotors 100 m [330 ft] in diameter.  This kind of high cage mast is already built in the shape of high radio masts.

Here is a picture of the kind of structure he envisaged: 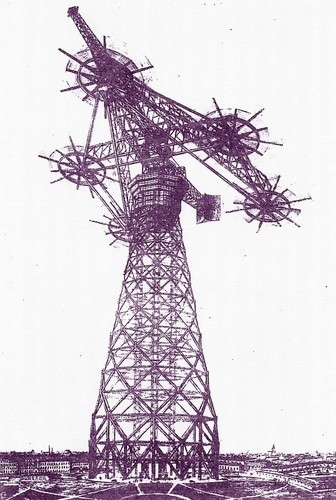 The Nazis’ preferred newspaper, Vőlkischer Beobachter, was similarly enthusiastic about the transformative prospects of this new, cleaner energy. In its February 24, 1932 edition, it praised a “sensational speech” by a Nazi engineer Hermann Honnef  whose enormous steel wind towers promised to provide abundant cheap energy.

The surplus electricity from the windmills, situated along the sea coast, will be used for the production of very inexpensive hydrogen.  This will make many products less expensive.  Fertilizers will fall in price.  The hydration of coal to liquids will be cost-effective.  The cost can be reduced from 17 pfennig per litre [64 pfennig per gallon] to 7-8 pfennig per litre [26-30 pfennig per gallon].  In this way about one billion Reichsmark can be saved, which today goes abroad (for importing oil).  The 300,000 workers in the coal mining industry can keep their jobs, 200,000 in the mines and 100,000 for the liquefaction of coal.  The cost savings will make it possible that an additional 400,000 workers can be paid in the transforming process of the industry.

Unfortunately, Archibald reports, the scheme foundered for practical reasons. Just one of these towers would have required 27,500 tons of steel – “approaching the amount used in the Scharnhorst.” So the Germans put their renewable energy drive on hold in 1936. It was, of course, revived five decades later in their Energiewende – an ingenious scheme to replace fossil fuels with energy powered by wind and the sun in which Germany is so abundant sometimes for as many as two or three days each year.

But Nazi Germany’s contributions to the modern climate change industry did not stop with gigantic wind turbines. No. One of the earliest proponents of man-made global warming theory was none other than the Luftwaffe High Command’s chief meteorologist Hermann Flohn.

In 1941, he published the first German-language article on global warming, the title of which translates as The Activity of Man as a Climate Factor.

He was still publishing on this theme 40 years later, for example in a paper for Umschau entitled: C02-Induced Warmth More Dangerous than Nuclear Energy.

(*)To be fair some of us have been well aware for quite some time of the green movement’s connections with Nazi Germany: Himmler’s embrace of organic food; Hitler’s partial vegetarianism; Goering threatening to send animal abusers to the death camps; agricultural minister Richard Darre’s obsession with “Blood and Soil”; the ban on smoking on public transport; the Reich Nature Protection Law; etc. (I wrote about this in Watermelons)

Plus, there’s a much more comprehensive book on this fascinating subject due to be published quite soon, which is guaranteed to make the greenies’ heads explode and on which, of course, I shall be fully briefing you.

After all people on the conservative/skeptical side of the argument are far too often being accused by ignorant leftists of being literally Hitler. And I do think it’s important, every now and again, to remind these historical illiterates who the real Nazis are.