The following excerpt is from Rogue Spooks: The Intelligence War on Donald Trump by Dick Morris and Eileen McGann, published by arrangement with All Points Books, an imprint of St. Martin’s Press, a division of Macmillan Publishers.

Who Is Behind The Intelligence Coup?

It began with an unverified dossier compiled by Christopher Steele, the former MI6 spy who was hired by a U.S. opposition research firm and paid by Hillary Clinton supporters to find dirt connecting Donald Trump with the Kremlin during the campaign.

In retrospect, this highly flawed dossier was the catalyst that triggered everything else. A loss leader. False though it may have been, its allegations were sufficiently outrageous and sensational to attract the kind of nonstop media attention necessary to put the phony issue of a Trump-Putin arrangement on the front pages. 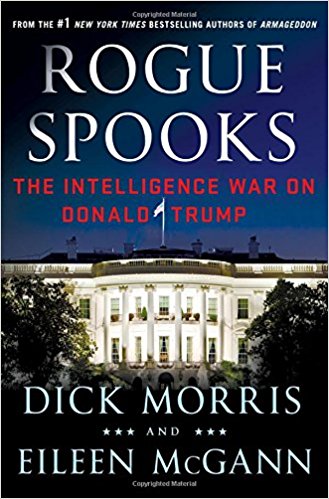 We still don’t know who was behind the dossier. We don’t know the identities of the Hillary supporters who paid for it. More important, we don’t know who actually made up the allegations that have been proven false and were passed to Steele. Who went to all that trouble?

It seems unlikely that the Russians would implicate themselves, but they certainly might have. Was it rogue British—and/or U.S.—spooks? Spies from other countries?

If Steele played the main role in assembling the dossier, who brought it to the public’s attention? There were a number of people who definitely helped out. But more than anyone else, it was former FBI director James Comey who insisted on bringing the unsubstantiated document to the attention of President Obama and congressional leaders, which ultimately led to its widespread publication. And he, more than anyone else, knew how unreliable the document was, but he passed it on anyway. The FBI had actually offered to pay Steele $50,000 to help them verify the allegations in the dossier. They ended up paying him expenses (while he was still working for the Hillary supporters right in the middle of the campaign).

When the New York Times reported that anonymous government officials alleged that Trump campaign associates had “repeated contacts with Russian intelligence,” Comey stayed on the sidelines and didn’t correct or clarify the story. Did the FBI know that the story wasn’t true? According to the White House, it was Comey’s deputy, Andew McCabe, who had assured Trump’s chief of staff that the Times story was “BS” but who later reportedly said, “We’d love to help but we can’t get into the position of making statements on every story.”

So, with no comment from the FBI, the claims that Trump aides were frequently in touch with Russian intelligence entered into the bloodstream of the Trump-Russia story line.

And, knowing that Trump was not under investigation, Comey deliberately leaked his own memos about his private meetings with President Trump, no doubt expecting they would trigger the appointment of a special prosecutor.

Why was Comey so invested in the anti-Trump dossier? And how did his relationships with others help kickstart this massive investigation that got so out of hand and so off track?

There is little doubt that Comey has an exalted self-image. Does he think he is the last good man on earth? Sometimes it looks like that. Others in Washington may wallow in half-truths, evasions, and corruption, but sometimes it seems that Comey believes he stands like a beacon above them all, a model of honesty and integrity.

Is he really that, or is he a headline hunter?

Comey seems addicted to the limelight. His career has been a parade of revolving headlines, always with Comey center stage, accompanied by an adrenaline rush from the publicity and controversy. To the outside observer, he looks like he’s suffering from an inside-the-Beltway strain of attention deficit disorder (ADD)—when he doesn’t get enough attention, he becomes disordered.

Don’t get between Comey and a camera.

How the Coup is Unfolding

The coup progressed when the unverified allegations in Steele’s dossier went public. But when Steele had first tried to pitch it to media outlets, he came up cold. They wouldn’t touch it without verification and proof.

So Steele and his colleagues asked Senator John McCain for help. With the senator’s intervention, Steele got the dossier to Comey. It was Comey who considered the dossier “so important that he insisted the document be included in January’s final intelligence community report on Russian meddling in the U.S. election.” That got it distributed to the president and leaders of Congress.

Comey had to know that the very act of giving a summary of the dossier to the president and Congress would lead to its leaking and publication all over the Internet. He once testified that he knew how Congress works—you give them something confidential and they leak it. So he was not blind to the likely consequences of his actions.

Once the dossier leaked, the other half of the new Intel/Media complex kicked in, as every major news organ breathlessly featured each new leak by the rogue spooks to give the impression that the president was nothing more than a desperate criminal trying to cover up his fraud during the election.

Trump knew he had done nothing wrong and had been assured several times by Comey in private that he was not under investigation personally.

But all this noise was getting in the way of the real progress he wanted to make. He couldn’t be an effective president with this nonsense—which he knew had no basis in fact—obscuring his presidency. Confronted with this kind of false narrative overshadowing his administration, it was predictable that Donald Trump, activist that he is, would ask for a public affirmation of exactly what he had been told in private—that he was not under investigation. After all, he knew they wouldn’t find anything. That there was nothing to find.

But Comey did not comply with that request. Instead, Trump’s intervention created a new narrative: The president was obstructing justice. After Comey met with the president, he wrote a memo to himself about their discussion. In his telling, it sounded as if Trump had leaned on him to discontinue his investigations of former national security advisor Mike Flynn.

But that wasn’t the end of it. Comey, no stranger to the ways of Washington, leaked the memo through a friend to the New York Times.

We don’t have to speculate what his goal was. He explained it himself: “I thought that might prompt the appointment of a special counsel.” He got fired in the process, but no matter, that goal was achieved: A special prosecutor was now inevitable.

Attorney General Jeff Sessions—a loyal Trump friend—had already removed himself from the process surrounding the Russian investigation, and thus could not appoint a special prosecutor. Instead, it was done by Deputy Attorney General Rod Rosenstein, a step down in the food chain. He named Robert S. Mueller, former head of the FBI.

But Mueller has a problem—there is no evidence that the president actually conspired with Putin. Comey had already told Trump that he was not under investigation several times. Now, instead, the investigation shifted to whether Trump obstructed justice by asking his appointees to bring the Russia investigation to an end (the same investigation in which he was not a target).

And now, Mueller can use the license of the special prosecutor to probe any other crimes he comes across. Now Donald Trump’s entire life and all his business dealings will be open to scrutiny and prosecution by a special prosecutor.

Already, leaks are flowing into the media from what appears to be Mueller’s office, so that the president will be tried in the press before any issue gets to Congress.

What a scenario for impeachment. What a way to plan a coup!