If those results are indicative of where Moore will be strong in Tuesday’s runoff contest, then he remains the favorite says Alabama State Sen. Trip Pittman (R). 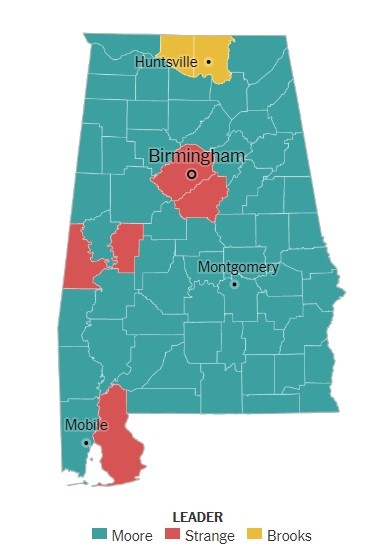 Pittman, who hails from southwestern Alabama’s Baldwin County, was a candidate in the August primary and came in fourth behind Moore, Strange and Brooks in a crowded field of 11 candidates. He told Breitbart News on Wednesday that he expects his home county, one of the most Republican in Alabama, to be close.

“It will be close in Baldwin County, but it’s all about turnout – motivated to vote for or against someone, and how many people are paying attention with all of the advertising before the actual date of the election,” Pittman explained.

He argued it wasn’t about being strong in one particular geographic location in Alabama but having an entire statewide game plan. Pittman explained that was a lesson he learned from his campaign. He likened it to last year’s Brexit vote and the back-and-forth vote tallies as they came in from rural and urban precincts.

“I think the interesting analogy would be — remember the Brexit vote?” Pittman said. “I thought that was one of the most amazing vote counts to ever watch because you would have these rural areas come in. And you know, the vote to get out – it would go, and it would go, and they would get a little lead, and a city would come in, and boom, they would be behind. It’s kind of like a bunch of ants climbing to the top of the mountain, then boom they get knocked back down.”

Pittman argues that Strange’s only path to victory will be if Moore’s voters don’t turn out.  Otherwise, if the contest generally has low or high turnout, it will remain advantage Moore.