Abortion advocacy groups say the GOP tax plan’s recognition of an “unborn child … at any stage of development who is carried in the womb” is “absurd” and another ploy to block access to abortion on demand.

A provision on page 93 of the Republican plan clearly states unborn children are eligible for tax-advantaged 529 college savings plans: 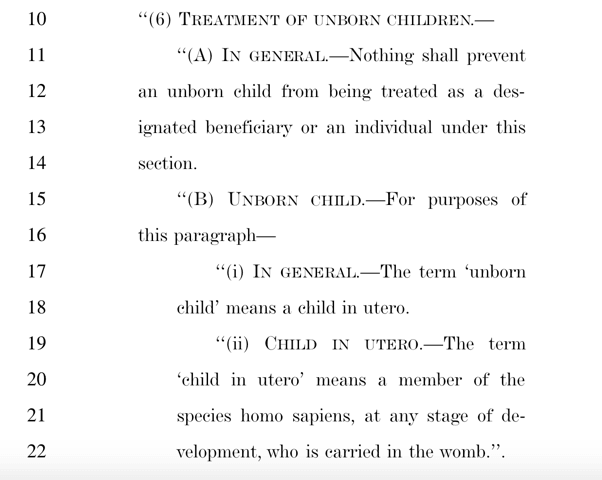 The provision states, “Nothing shall prevent an unborn child from being treated as a designated beneficiary or an individual under this section.”

“The term ‘unborn child’ means a child in utero,” continues the provision, adding that a “child in utero” is defined as “a member of the species homo sapiens, at any stage of development, who is carried in the womb.”

NBC News notes that while prospective parents are already currently permitted to open college savings accounts prior to the birth of their child, the language of the new provision solidifies the argument that unborn children are humans and should be allowed equal protection under the law.

“It is absurd that House Republican leaders would use a tax bill to try to advance their relentless agenda to undermine access to safe, legal abortion,” said Kevin Griffis, vice president of communications for Planned Parenthood, according to NBC News. “Denying women access to safe, legal abortion is wildly out of touch with the majority of Americans. Politicians in Washington, D.C., have no place inserting themselves in decisions about women’s health and lives, not on this bill and not on any bill.”

“The GOP’s relentless obsession with advancing its dangerous anti-choice ideology knows no boundaries and no common sense,” NARAL tweeted:

The GOP's relentless obsession with advancing its dangerous anti-choice ideology knows no boundaries and no common sense. #TaxReform pic.twitter.com/gU6XyRdBC7

Erica Sackin, director of political communications at Planned Parenthood Federation of America and Planned Parenthood Action Fund, tweeted in reply, “This is a clear attempt to use the tax bill to make it harder to access abortion.”

This is a clear attempt to use the Tax bill to make it harder to access abortion. pic.twitter.com/SVjUU33jrT

National pro-life leaders, however, see the new provision as another step toward assuring unborn children obtain the law’s protection.

“It’s a small increment in the momentum that we’re building to ensure that one day every child is welcomed and protected under the law,” said Mallory Quigley, the communications director for the pro-life Susan B. Anthony List. “We hope that it stays in the House bill and that it stays in anything the Senate puts out.”

Similarly, March for Life president Jeanne Mancini, praised the language in the plan and House Ways and Means Chairman Kevin Brady (R-TX) for including language in the tax bill that “recognizes the personhood of unborn children by allowing expectant parents to contribute to their child’s 529 education savings account in the year prior to birth.”

“A child in the womb is just as human as you or I yet, until now, the U.S. tax code has failed to acknowledge the unborn child – all while granting tax breaks for those seeking an abortion under the pretense of ‘healthcare,’” Mancini said. “The proposed tax plan is a huge leap forward for an antiquated tax code, and we hope this is the first step in expanding the child tax credit to include unborn children as well.”

Tax Bill is strong but needs to include adoption tax credit. Providing a home for a child that is unwanted or special needs is pro-life!

Students for Life of America president Kristan Hawkins tells Breitbart News the GOP tax plan language is a positive step, but hopes more will be done to assist parents who choose to adopt.

“Pro-life policies must include helping parents prepare for their children’s future, which makes the announced changes in tax policy an important sign that the Trump Administration is working to protect and support mothers, fathers and children, born and pre-born,” she says. “Still, it’s disappointing that the adoption tax credit isn’t in the current proposal, given the high cost of adoption and the needs of children for a family. We urge lawmakers to do everything they can to support parents who are doing the heroic and costly work of raising the next generation.”