The United States Senate voted to confirm former President George W. Bush bureaucrat Kirstjen Nielsen to lead the Department of Homeland Security (DHS) despite her ties to the “Never Trump” movement and seemingly having no experience working on immigration-related issues.

The Senate confirmed Nielsen in a 62-37 vote on Tuesday, making her the new head of the agency which is tasked with carrying out President Trump’s pro-American immigration reform agenda. 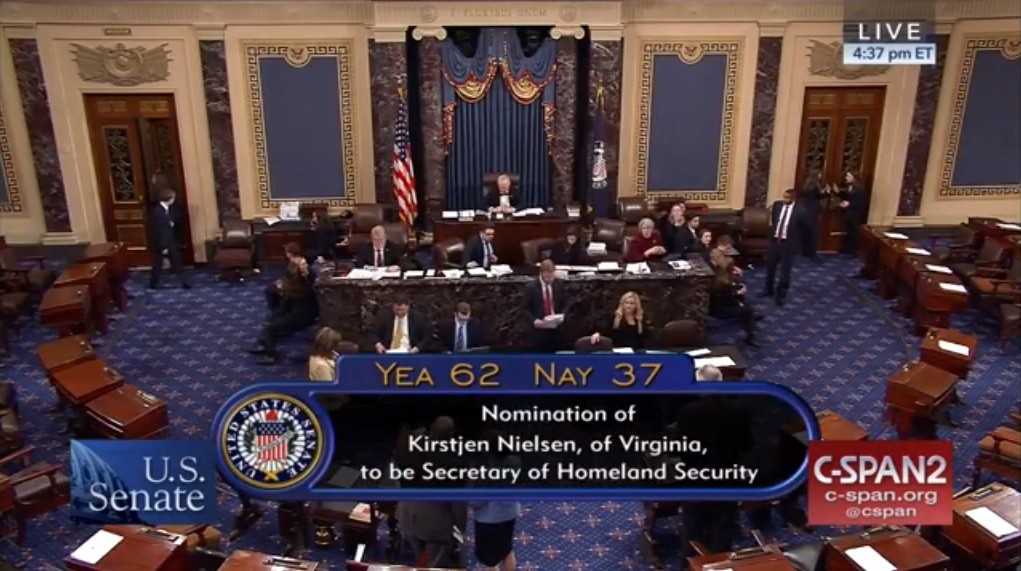 Previously, as Breitbart News extensively reported, Nielsen worked as a special assistant to Bush and as the chair of the World Economic Forum’s Global Agenda on Risk & Resilience Committee.

While working for Bush, the administration — immediately following hurricane Katrina in 2005 —  temporarily dismantled pro-American worker laws, such as suspending sanctions for employers who willingly hire illegal aliens, and waving the 1931 Davis-Bacon Act, which mandated that federal contractors pay workers the average regional wage.

The impact of Bush’s decision had a devastating effect on working-class Americans who saw their jobs wash away with Katrina, as Breitbart News reported. The results amounted to an estimated 30,000 illegal aliens entering the Gulf Coast region to take thousands of American blue-collar jobs that would have otherwise gone to impacted working-class Americans.

As chair of the World Economic Forum committee, Nielsen promoted mass immigration to Europe and the U.S., claiming Western nations did not have a choice and needed to accept millions of migrants. That report, as Breitbart News reported, was co-authored by executives from multinational corporations and world banks.

Not only does Nielsen’s prior experience run contrary to Trump’s populist-nationalist agenda on immigration, but her current views on illegal immigration and amnesty for illegal aliens ignore the president’s pro-American agenda.

During a Senate Homeland Security and Governmental Affairs Committee hearing, Nielsen said she believed that Americans “owe” amnesty to illegal aliens who have been shielded from deportation by the President Obama-created Deferred Action for Childhood Arrivals (DACA) program.

“I believe that we must and we owe it to them to find a permanent solution,” she said of passing a DACA amnesty that could potentially lead to a chain migration of 9.9 million to 19 million foreign nationals pouring into the U.S. legally. “It’s no way to expect anyone to live a month or two months at a time,” said Nielsen, even though the DACA work-permits each last for two years.

Nielsen also downplayed Trump’s border wall plan, the most important immigration initiative, during the committee hearing, saying “There is no need for a wall from sea to shining sea,” Breitbart News reported.

Instead, Nielsen touted “technology” along the southern border as being just as necessary to stop illegal immigration. The technology-based “virtual-wall” narrative is often used by Democrats and Republican establishment to fake sympathy for the public’s insistence on a border wall.

Even when it comes to how to best deter illegal immigration, Nielsen fell back on a bureaucratic, globalist-aligned position rather than one taken from Trump’s pro-American immigration principles.

For instance, Nielsen said that the U.S. should deter illegal immigration from Central America with a quasi-nation-building plan whereby taxpayer money is used to help better the economies of places like Guatamala and El Salvador.

“We have to increase the prosperity there,” Nielsen said. “There’s a variety of programs, you and I have discussed, including the Alliance for Prosperity. But to really help the community find jobs, track the private sector, and enable the community to be resilient in such a way that it in of itself provides the type of environment that citizens would want to stay.”

Nielsen additionally contradicted Attorney General Jeff Sessions in her hearing, conceding to Democrats that she will issue a directive to Immigration and Customs Enforcement (ICE) agents to focus primarily on deporting criminal illegal aliens.

Following her hearing, an Axios report revealed that Nielsen’s ignoring of Trump’s immigration principles and pro-amnesty views had “reduced” the president’s leverage on immigration issues.