President Trump’s most popular pro-American immigration reform, the system known as “E-Verify,” which would bar employers nationwide from hiring illegal aliens over Americans, has been entirely left out of all negotiations regarding the nearly 800,000 illegal aliens shielded from deportation by the President Obama-created Deferred Action for Childhood Arrivals (DACA) program.

DACA will end in March 2018 and despite amnesty for illegal aliens never being part of Trump’s “America First” agenda on immigration, the White House is now considering which pro-American immigration reforms it can get in return for granting an amnesty.

Among the reforms the Trump administration is demanding in return for a DACA amnesty is the end to the process known as “chain migration,” which would cut legal immigration levels in half and raise wages for American workers; an end to the Diversity Visa Lottery program, which randomly gives out 50,000 visas every year to foreign nationals through a lottery system; and finally, full funding for his proposed border wall along the U.S.-Mexico border.

While Trump wants to trade a DACA amnesty for reforms that would reduce legal immigration to the U.S. — thus reducing the mass immigration burden on America’s working and middle class — he has not included mandatory E-Verify in his demands.

Under nationwide mandatory E-Verify, the big business lobby and corporate interests would see a major defeat, as employers would be held legally responsible for hiring illegal aliens. That responsibility could come in the form of thousand dollar fines for each illegal alien hired by an employer.

Mandatory E-Verify is easily the most popular immigration reform in the country, with the most recent Pulse Opinion Research poll finding that nearly 60 percent of likely American voters want mandatory E-Verify to be part of a deal on DACA, if there is a deal. 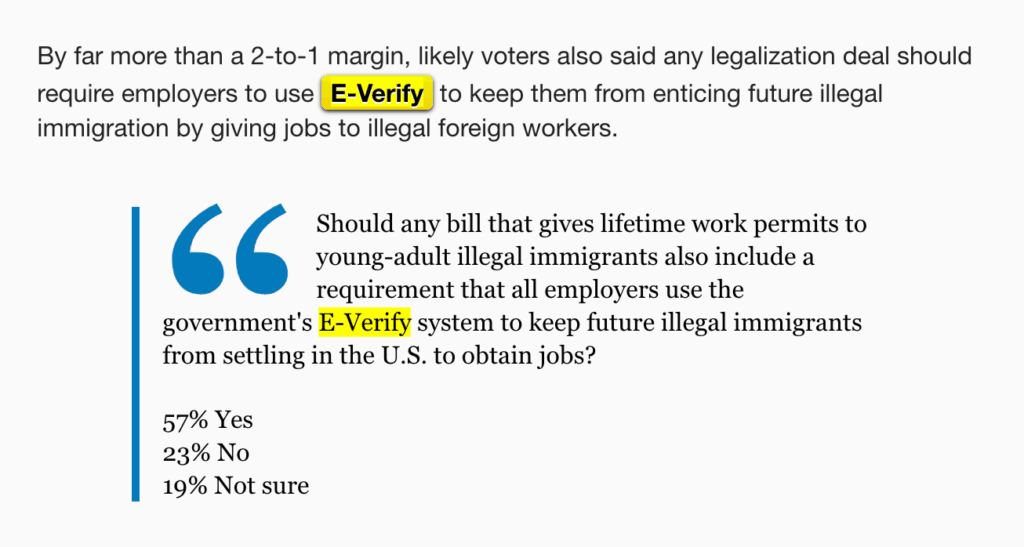 Months ago, when likely American voters were asked by Pulse Opinion Research if they supported mandatory E-Verify, a majority of 68 percent said yes. Another 71 percent of voters said businesses should be required to hire from pools of Americans with the highest unemployment rates before importing cheaper, foreign workers through various visa programs or hiring illegal aliens.

Even if Americans had to pay more for products and goods, the Pulse Opinion Research poll showed nearly 60 percent of voters said it would be better for businesses to pay more to attract American workers, even if prices did rise.

At the same time of deterring businesses from hiring illegal aliens over Americans, mandatory E-Verify would also likely greatly reduce illegal immigration to the U.S., as the program would cut off the number one incentive for illegal aliens to cross into the country through the southern border, while increasing Americans’ wages and job opportunities as they would no longer have to compete with cheaper, illegal foreign workers.

Pro-American immigration reformers, like Kansas Secretary of State Kris Kobach, have scratched their heads as to why Trump has not demanded mandatory E-Verify in his DACA negotiations, telling Fox News that in the midst of a border surge because of a DACA amnesty, E-Verify would be one of the only deterrents to stem that problem.

“He’d have to demand E-Verify, mandatory nationwide as well to make sure that this new surge of illegal aliens — which will come in, there’s no question, if we grant an amnesty, they will come in — make sure that they don’t take additional jobs from Americans,” Kobach said of Trump’s negotiations.

A recent study by researchers Pia M. Orrenius and Madeline Zavodny found that “having an E-Verify law reduces the number of less-educated prime-age immigrants from Mexico and Central America — immigrants who are likely to be unauthorized — living in a state.”

The research showed that the number of low-skilled, likely illegal aliens living in states with mandatory E-Verify was cut by 50 percent, a result that shows the “powerful effect” of the employment verification system, according to the Center for Immigration Studies’ Preston Huennekens.

Trump is expected to meet this week, once again, with members of the Republican establishment and Democrats to discuss cutting a deal on DACA. There remains no indication, though, that mandatory E-Verify will be a part of those discussions.