This week at the Conservative Political Action Conference (CPAC) 2018, my organization, the American Freedom Defense Initiative (AFDI), is partnering with the American Principles Project (APP), which is hosting our blockbuster panel discussion on the social media giants’ rapidly accelerating attempts to shut down conservatives and deny a voice to everyone who dissents from the hard-left agenda.

Yes, we’re back at CPAC, and, as always, with a panel that addresses one of the most urgent issues of the day:

Major social media platforms such as Google, Twitter, Instagram, Facebook, and YouTube have created the new town square, having become the primary portals through which Americans receive news today. On these platform, the Left has a monopoly. The social media giants are moving actively to erase and hide any viewpoint or person that does not conform to the “progressive” values for which they stand. 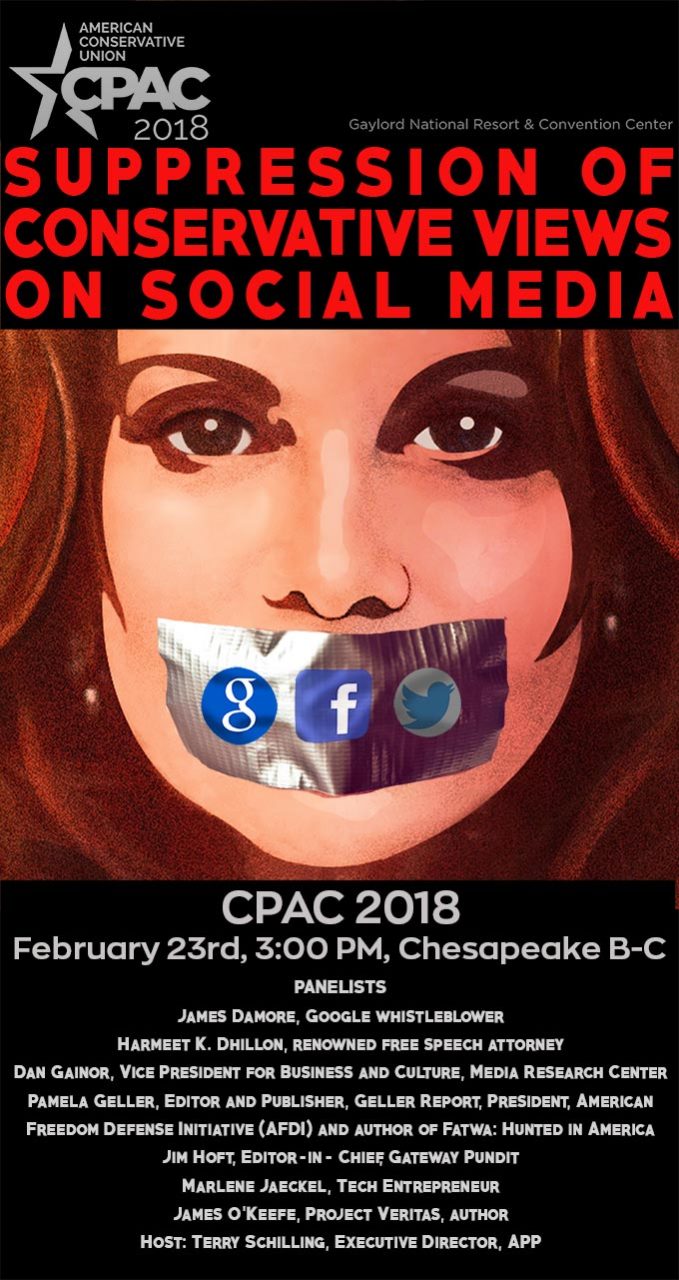 This has resulted in massive losses of readership and revenue for conservative sites, and endangers the very freedom of our Republic by allowing only one point of view to be aired. The social media corporations today hold more power over the public discourse than any totalitarian regime ever held. They do not just target voices with whom they disagree, but they make sure that those voices are unable to sustain themselves.

This panel will discuss the magnitude of this phenomenon, and discuss ways that the power of these Leftist social media outlets can be limited, such that voices that dissent from the hard-Left agenda can again be freely heard.

America, the world’s first government based on individual rights and personal liberty, should be on the forefront of the defense of freedom of speech across the world, the light among nations, the “shining city on a hill.” Instead, social media giants, run by uniformly leftwing corporate managers, have become the new totalitarians. This evokes the worst totalitarian regimes in the history of the world. Never in modern history has such immense power been in the hands of so few.

Panelist James O’Keefe added: “Social media giants in Silicon Valley have quickly become the world’s most powerful media gatekeepers, even more powerful than the mainstream media. We exposed Twitter for silencing and shadow banning people they do not agree with, and propagated their preferred views for political and financial purposes.”

Panelist Dan Gainor said: “Tech/social media companies are vastly more powerful than their old media predecessors in print and TV ever were. We’ve already seen some of the dangers of what happens when that power is abused. This isn’t just a panel discussion about what might happen. This is a wake-up call for the entire conservative movement.”

Another panelist, Jim Hoft, observed: “2016 was the first election where conservatives fled the liberal mainstream media. After decades of smears and abuse they found the truth in conservative media online. Today there are forces working to make sure this does not happen again. It’s time to stand up before it’s too late.”

This groundbreaking panel discussion follows on the heels of Can’t We Talk About This? The Islamic Jihad Against Free Speech, our shocking new film detailing the concerted effort by international organizations to compel the U.S. and other Western countries to curtail the freedom of speech and criminalize criticism of Islam.

This issue — the suppression of the freedom of speech on social media — affects all of us on the right. In fact, it is the most critical issue of the day: if we are stripped of the means to communicate with one another, it’s all over. It was free people speaking freely on social media, outside of the reach of the media establishment, that got Donald Trump elected President of the United States. When the left lost the election, they lost their mind.

We must not allow the left to strip us of the weapons we used to win that victory. That’s what we’ll be fighting for at CPAC.

Pamela Geller is the President of the American Freedom Defense Initiative (AFDI), publisher of The Geller Report and author of the bestselling book, FATWA: Hunted in America, as well as The Post-American Presidency: The Obama Administration’s War on America and Stop the Islamization of America: A Practical Guide to the Resistance. Follow her on Twitter or Facebook.