“NBC News reporting tonight on the 2016 elections is not accurate and is actively undermining efforts of DHS to work in close partnership with state and local governments to protect the nation’s election systems from foreign actors,” said a Tweet by Tyler Q. Houlton, the acting DHS press secretary. “We believe tonight’s story to be factually inaccurate and misleading,” he added.

The NBC Nightly News report said that seven states’ election systems were “successfully compromised” by Russian hackers — but delayed explaining what the “compromise” term meant until two minutes into the report, and eventually acknowledging that “All the state and federal officials we spoke to do agree no votes were changed and no voters were taken off the rolls.”

NBC NEWS EXCLUSIVE: As of January 2017, U.S. intel had substantial evidence that 7 states had been "compromised" by Russia prior to or during the 2016 presidential election.

NBC’s online version explained the term in the fourth paragraph after the lede:

The U.S. intelligence community developed substantial evidence that state websites or voter registration systems in seven states were compromised by Russian-backed covert operatives prior to the 2016 election — but never told the states involved, according to multiple U.S. officials …

The officials say systems in the seven states were compromised in a variety of ways, with some breaches more serious than others, from entry into state websites to penetration of actual voter registration databases.

Houlton responded quickly to NBC’s report, zeroing in on the meaning of “compromised.”

.@NBCNews reporting tonight on the 2016 elections is not accurate and is actively undermining efforts of @DHSgov to work in close partnership with state and local governments to protect the nation’s election systems from foreign actors. https://t.co/JfDtnDLKdh 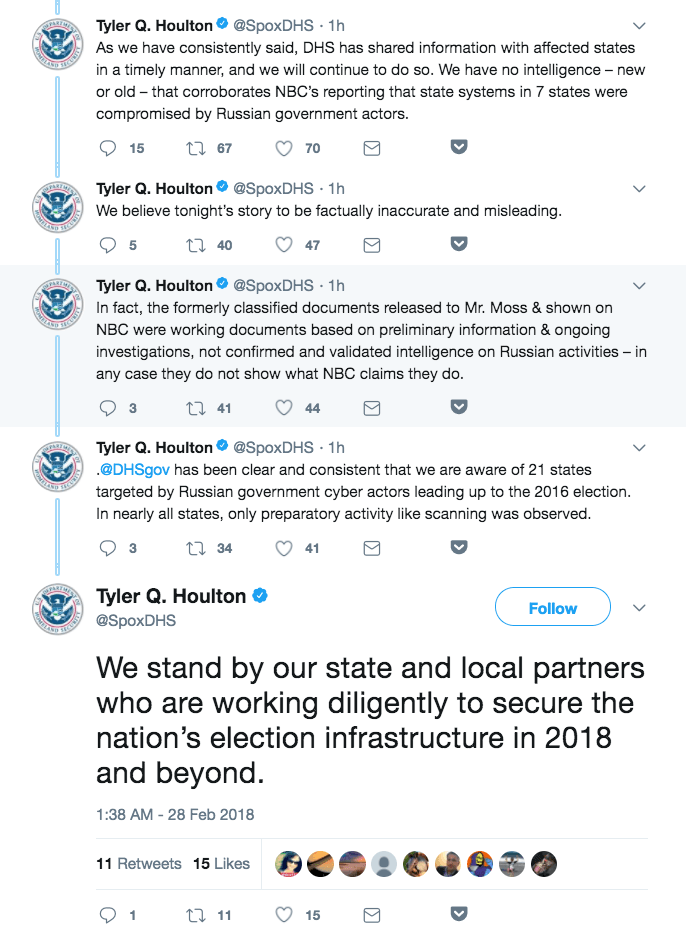