It takes more than 90 minutes to travel the 20 miles from Jim Chilton’s house on his sprawling Arizona cattle ranch to the border between the United States and Mexico. But the multi-generational rancher is willing to take guests along for the ride to show them why a wall is needed to secure the homeland. 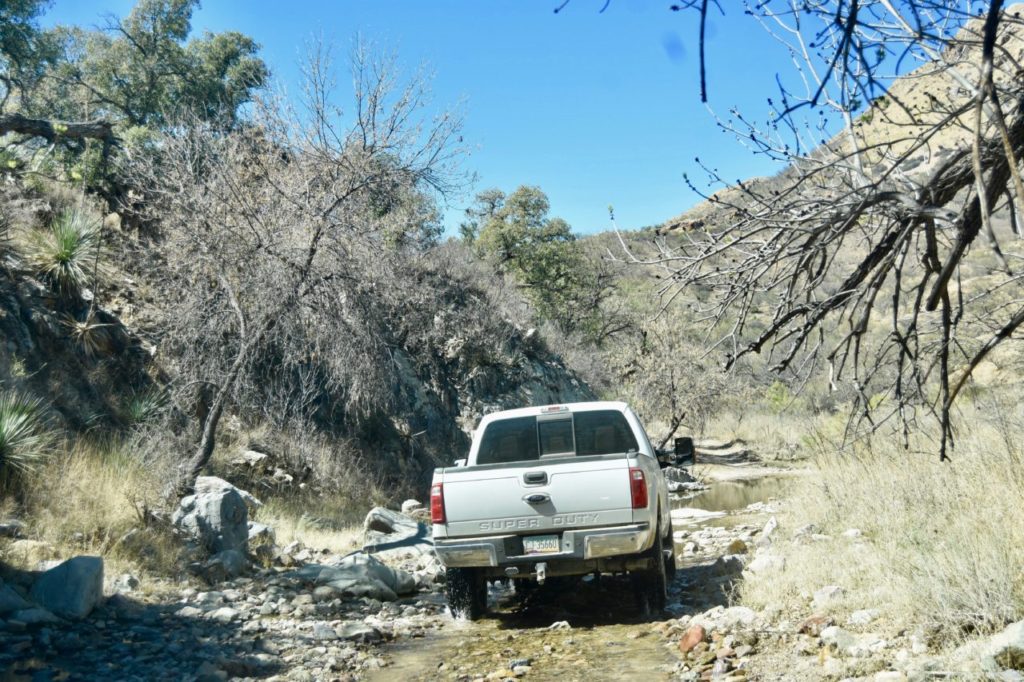 It takes more than 90 minutes on rough roads and creeks to travel the 20 miles from Jim Chilton’s ranch house to the border. (Penny Starr/Breitbart News)

On this tour, Kelli Ward, Republican U.S. Senate candidate who hopes to replace retiring Sen. Jeff Flake (R-AZ), is in his heavy-duty pickup truck traversing rocky roads and deep creeks to reach the location where Chilton points to the four-strand barbed wire fence that stands between his ranch and Mexico.

To make his point, Chilton, 79, slides under the fence and stands up on Mexican soil: 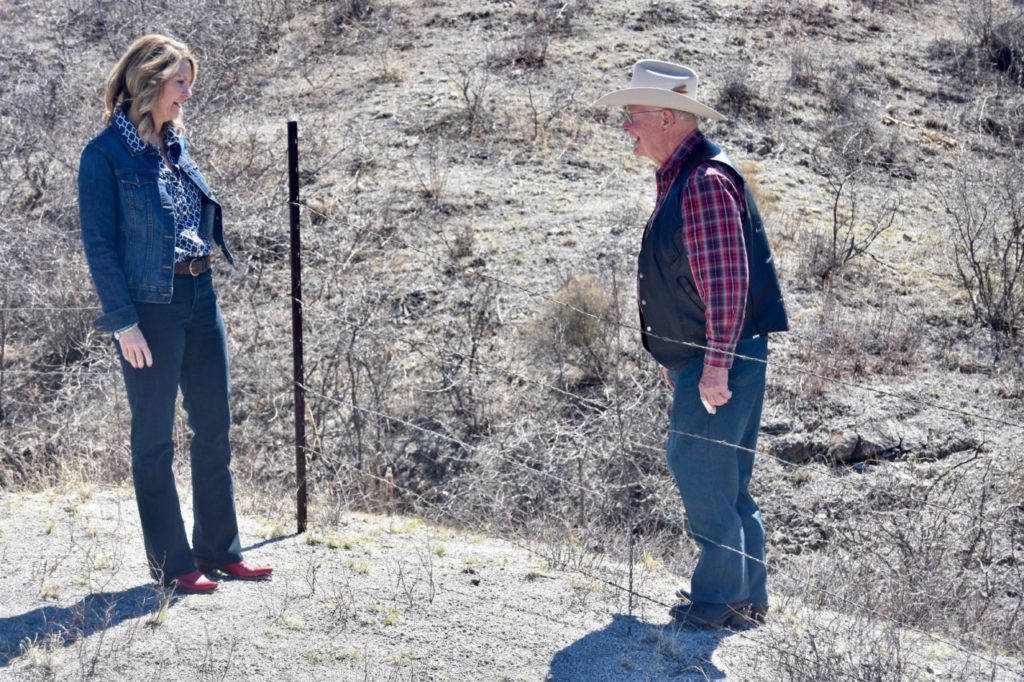 Republican U.S. Senate Candidate for Arizona Kelli Ward stands by the small barbed wire fence that serves as the border between the U.S. and Mexico. Rancher Jim Chilton crawled under it and stood on Mexican soil. (Penny Starr/Breitbart News)

Ward, who has visited border areas in the state before, said she is even more convinced of the need for a wall between the U.S. and Mexico after this visit.

“We’ve got to have the wall,” Ward told Breitbart News after the tour.

On this sunny, spring day, the only sign of life is the occasional Roadrunner or heifers resting under still-bare Mesquite trees.

Chilton said he rarely sees U.S. Customs and Border Patrol agents along this stretch of his 50,000-acre property that includes leased federal land where hundreds of his cattle graze.

The exception happened on this tour when two vehicles filled with agents stopped to talk to Chilton. The agents told him someone had walked along the border for several miles before being picked up by fellow agents.

Chilton, who has owned the ranch for 30 years, said it was the first time he had run into any agents walking the border.

When Breitbart News asked the agents about the four-strand fence, one of the agents responded,

“If you go farther down, there’s nothing”: 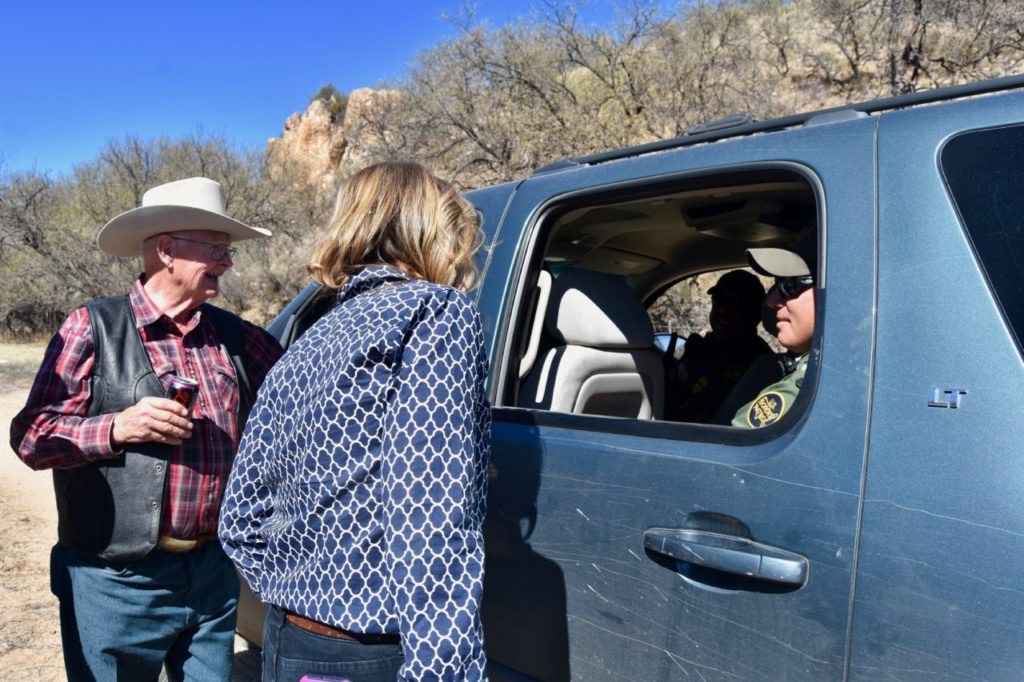 There is an operational tower in the area with cameras and motion detecting technology, but Chilton said rain and wind can hamper the technology.

And Chilton’s frustration is not with the agents who risk their lives along the crime-infested border every day, but with the federal government that doesn’t have a strategy in place to help them actually secure it.

After returning to Chilton’s home, which includes a stuffed mountain lion he hunted down after it had taken several calves, the rancher told Breitbart News that the main problem is the border patrol is not actually on the border: 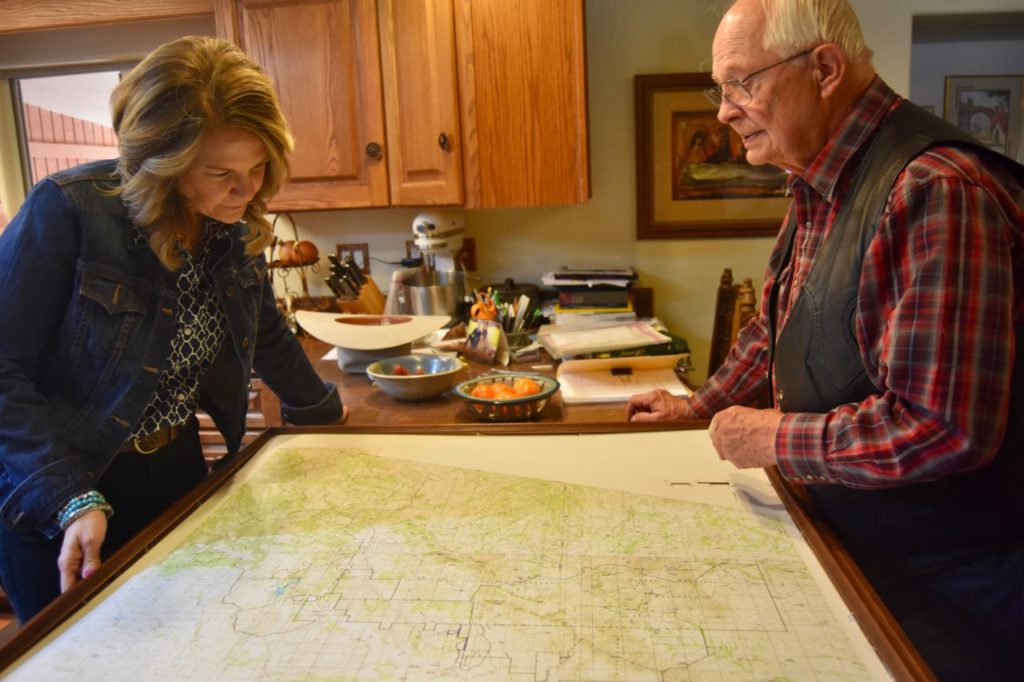 Arizona rancher Jim Chilton shows Kelli Ward, Republican candidate for the U.S. Senate in that state, a map that shows how his 50,000-acre ranch stretches along the U.S. border with Mexico. (Penny Starr/Breitbart News)

Breitbart News asked Chilton about the 25 miles of unsecured border, a stretch of which was witnessed on the tour.

“Twenty-five miles of four-strand barbed wire fence,” Chilton said. “And it’s outrageous because the Border Patrol is 80 miles from the international boundary”: 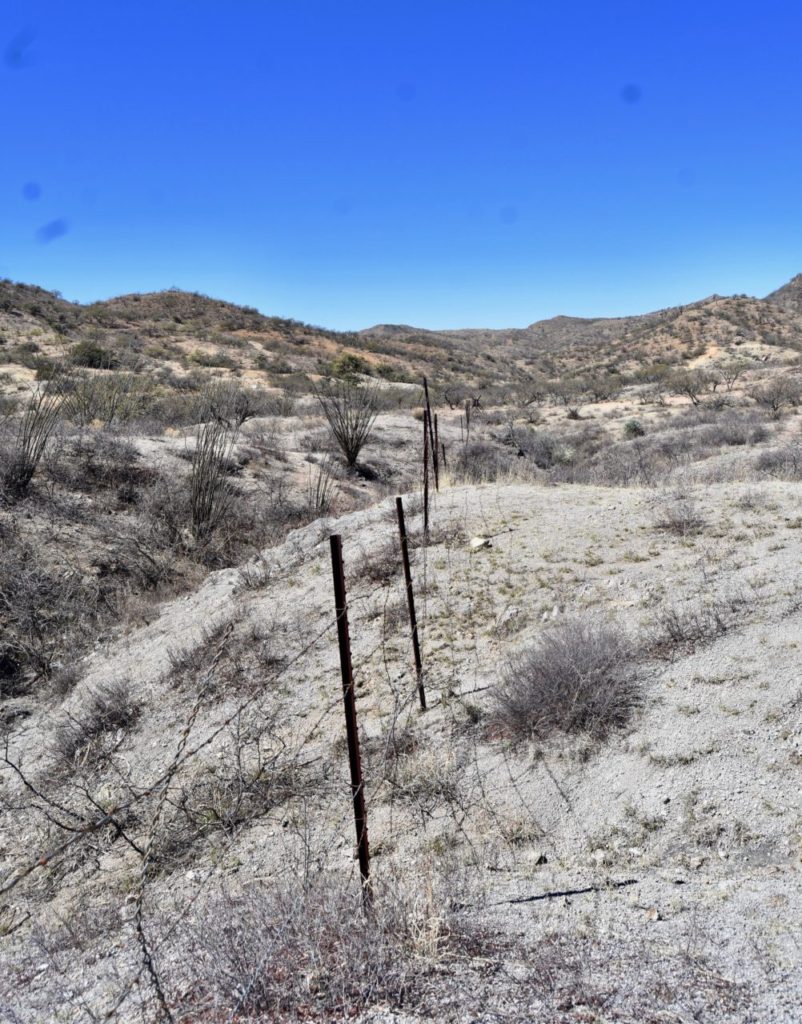 The fence that serves as the “barrier” along the U.S. Mexico border is not even easy to see unless someone guided you to it. (Penny Starr/Breitbart News)

“So the Border Patrol only comes halfway out and tries to patrol this area where we are at the north end of the ranch,” Chilton said. “But 20 miles to the south of the ranch, it’s a four-strand barbed wire fence.”

Breitbart News asked him what should be done to secure that part of the border.

“When Trump announced that he was going to build a wall, I mean, I was so excited, my socks were rolling up and down,” Chilton said. “I was so enthused, and so I voted for Trump, and I hope he builds the wall.”

“We need it desperately, and we need to move the Border Patrol out of Tucson out to the international border,” Chilton said. “And they have 27 agents per mile they could secure the border — a wall, a road, and a forward operations base.”

Breitbart News asked Ward what she had learned on the tour.

“It was really truly an amazing experience today — to be able to see the trials and tribulations that he and other ranchers face on a day-to-day basis,” Ward said. “A lot of times, people talk about these as just poor illegal immigrants who want to come to our country for a better life.”

What they do not talk about is drug trafficking run by cartels that Chilton said control much of the area, including having scouts on hilltops monitoring any Border Patrol activity.

“I think the plan that Jim talks about is very thoughtful and actually could be achieved,” said Ward, who is a physician and has served as an Arizona state senator. “Of course, you know, I’m a fan of ‘build the wall.’”

“And I think that moving the Border Patrol to the border is imperative,” Ward said. “And make sure we have people in this fighting force who are willing to stand up and protect the border.”

“Their job is to keep people from coming into this country illegally in the first place, and I think with the plan that … we’ve talked about, a lot today can be achieved,” Ward said.

One of the first things visitors see when they arrive at Chilton’s ranch house are more than 100 pairs of what he calls “carpet shoes.” They are made of varying material and designed to slip over shoes. The soles are covered with carpet: 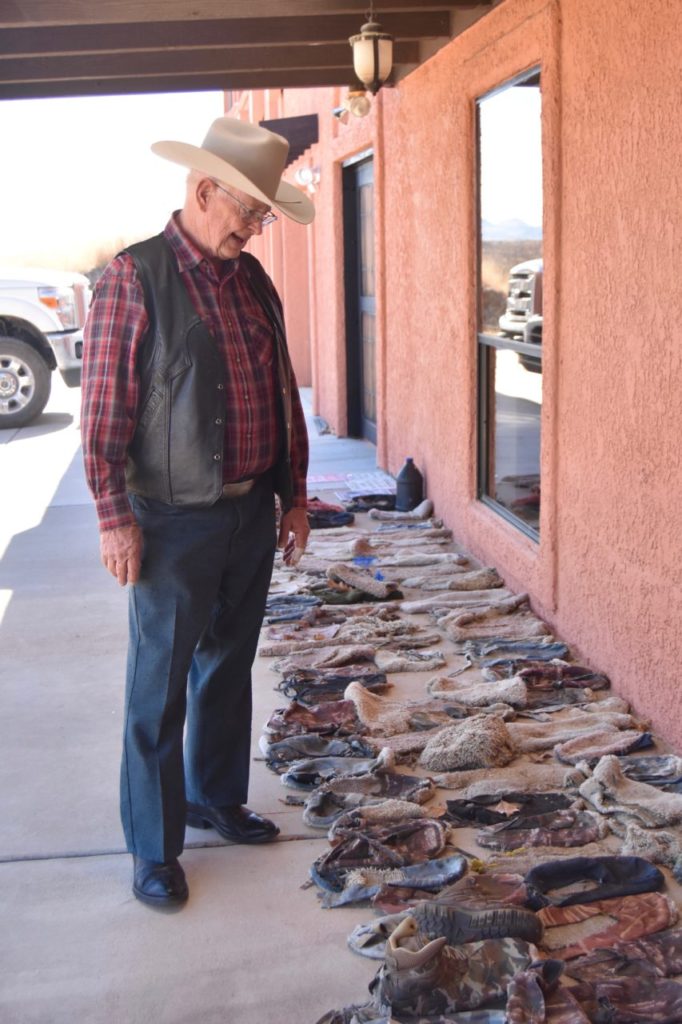 Arizona rancher Jim Chilton stands on the front porch of his home with dozens of ‘carpet shoes’ worn by illegal aliens entering the United States. Chilton said the carpet on the bottom of the shoes makes it harder for the U.S. Customs and Border Patrol agents to track people. (Penny Starr/Breitbart News)

“And since there’s carpet on the bottom, they don’t leave tracks,” Chilton said. “The Border Patrol used to pride themselves as the best trackers in the world.”

“Now, they don’t even bother to track,” Chilton said: 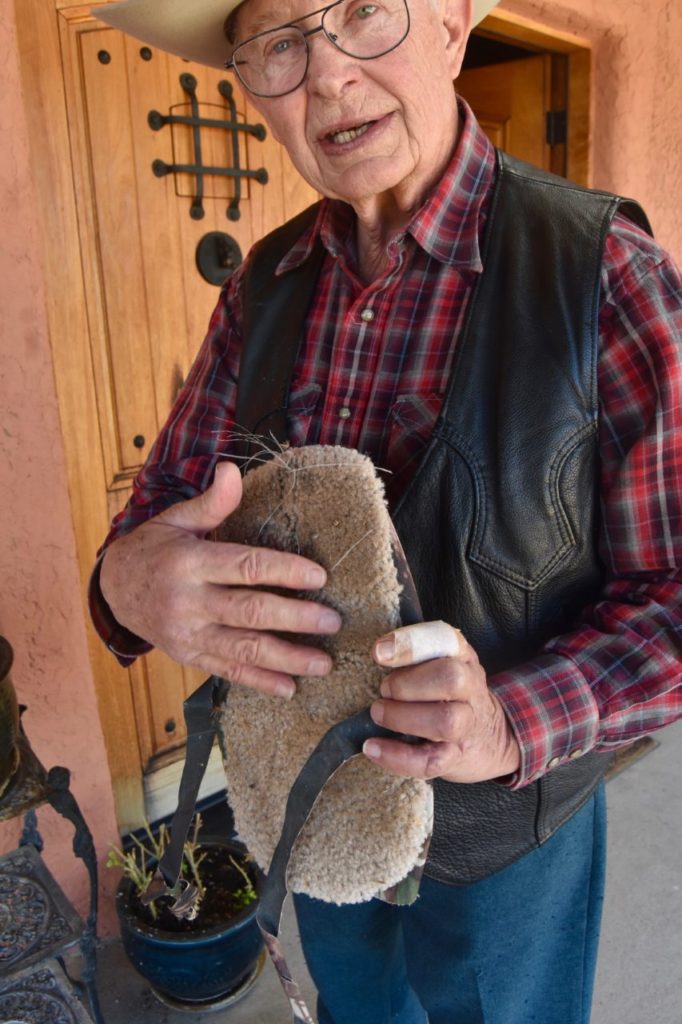 Arizona rancher Jim Chilton holds up a pair of shoe covers that have carpet on the bottom of them to make it harder to track people coming into the United States at the border with Mexico. (Penny Starr/Breitbart News)

Ward said the shoes are a troubling reality.

“The thing that we should be worried about is probably every one of these shoes represents a hundred or a thousand people who came into this country the wrong way,” Ward said, “many of them to do us harm.”