Despite Department of Homeland Security (DHS) Secretary Kirstjen Nielsen’s negotiations with Mexican diplomats this week on border security, that country’s officials are allowing about 1,500 Central Americans to cross their country in order to seek asylum in the United States.

A report by Breitbart Texas notes how about 1,500 Central Americans are traveling through Mexico in hopes of crossing into the U.S. through the southern border as refugees. In the process, Mexican immigration agents are not stopping the caravan of Central Americans.

Known as the Viacrucis Migrante 2018, the caravan began on March 25 in the state of Chiapas and is expected to reach Tijuana within a month where the members of the group are expected to request refugee status from the U.S. government. The caravan is organized by the immigrant rights group Pueblo Sin Fronteras who have been posting updates about the caravan’s journey through Mexico.

While the group is made up primarily of individuals who could be considered undocumented by Mexican authorities, officials have stepped aside, Mexico’s El Universal reported. Additionally, the group has been thankful to the local governments in various rural communities in southern Mexico for helping the caravan by providing transportation, food, and other aid. 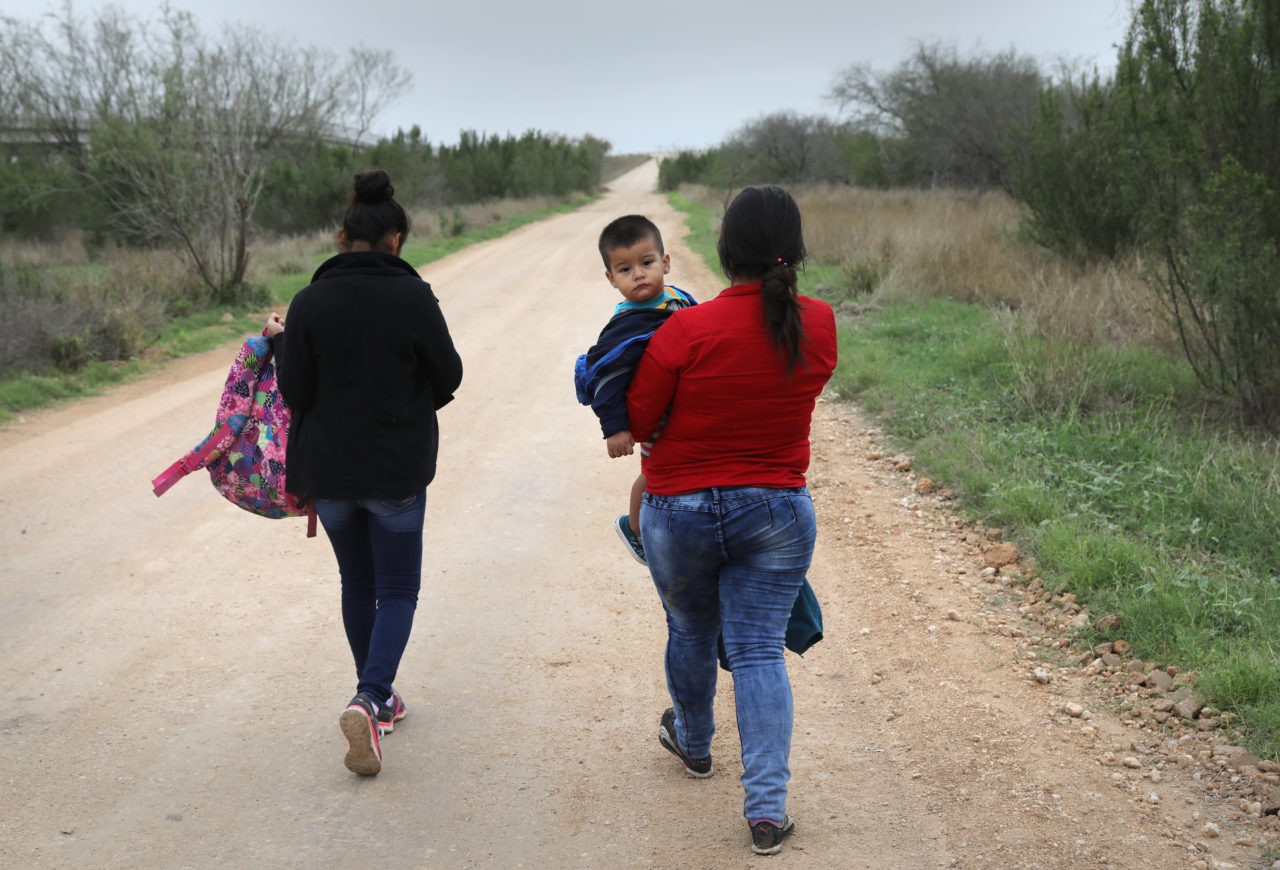 Central American immigrants walk after crossing the U.S.-Mexico border to turn themselves in to Border Patrol agents on February 22, 2018 near McAllen, Texas. Thousands of Central American families continue to enter the U.S., most seeking political asylum from violence in their home countries. South Texas’ Rio Grande Valley has the highest number of undocumented immigrant crossings and narcotics smuggling of the entire U.S.-Mexico border. (Photo by John Moore/Getty Images)

The news comes after Nielsen met with Mexican officials this week, talking about border security between the two countries. In press releases by DHS, Nielsen’s negotiations were touted as successes. 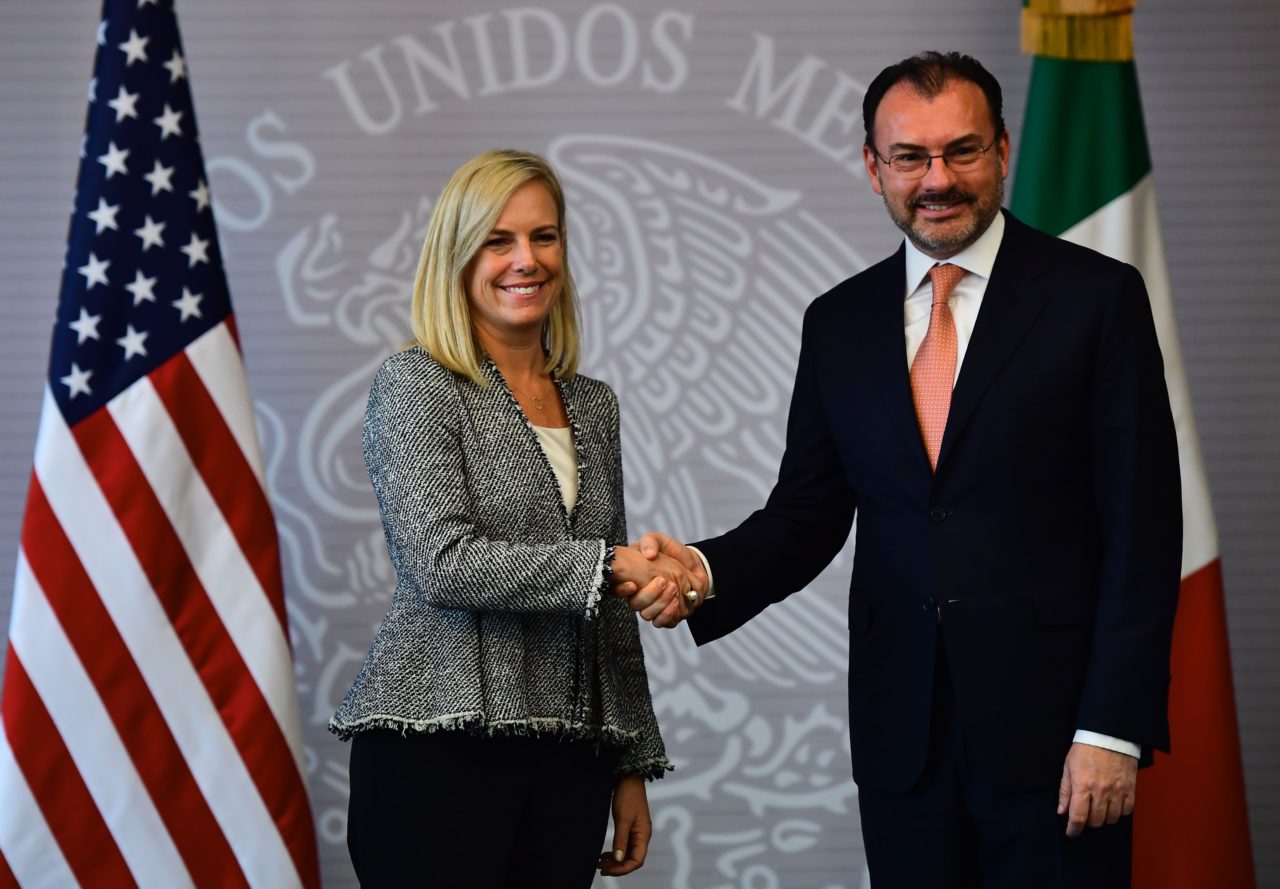 During their meeting, Secretary Nielsen and President Peña Nieto discussed their efforts to improve border security through close collaboration. They focused on ways to facilitate more secure trade and travel between the two countries. Secretary Nielsen emphasized the Department of Homeland Security’s (DHS) commitment to working with Mexican counterparts to combat transnational crime affecting both the United States and Mexico. She also stressed the importance of the partnership between the United States and Mexico – particularly via intelligence sharing – and thanked the Mexican President for helping to foster a close partnership with the Department during his administration. [Emphasis added]

In separate bilateral meetings with Secretary of Foreign Affairs Luis Videgaray Caso and Secretary of Interior Alfonso Navarrete Prida, Secretary Nielsen discussed a range of national security issues including the importance and success of joint operations at the border, such as increased seizures, and improved information sharing. They also discussed the need for infrastructure improvements along the border to speed legitimate trade and travel.  This included their shared commitment to cross border economic prosperity.  Both sides expressed concerns with migration flows including those caused by the collapse of the Venezuelan economy and its impact in the region.  The partners shared their mutual desire to confront transnational criminal organizations and money laundering. Lastly, both sides reiterated their long held respect for the human rights of migrants. [Emphasis added]

Nielsen’s negotiations, however, have yet to result in Mexico’s officials taking a more hawkish approach to Central Americans crossing through the country in an effort to arrive in the U.S.

Breitbart Texas’s reporting notes that the group of 1,500 Central Americans is made up of nationals from Honduras, El Salvador, and Guatemala.

As Breitbart News reported, apprehensions along the U.S.-Mexico border have ticked back up to former President Obama-era levels, with a total of 26,666 illegal aliens being apprehended at the border last month alone.