Laura Dowling took in the details of the Trump administration’s first official state visit and dinner, from the French-infused culinary delicacies and floral arrangements to the operatic offering staged to entertain French President Emmanuel Macron, his wife Brigitte, and other guests.

Dowling’s perspective on what unfolded inside the White House is one reserved for an insider. Dowling served as the chief floral designer at 1600 Pennsylvania Avenue from 2009 to 2015. She’s also the author of two books; Floral Diplomacy at the White House and A White House Christmas.

For Dowling, the state visit and dinner were not only an impressive show of what she calls “cultural diplomacy” but also a shining moment for first lady Melania Trump, who single-handedly planned every detail of the ceremonial meal.

Dowling was so inspired, she wrote a commentary about it and shared it with Breitbart News.

“For many observers, the diplomatic tour de force on display during this week’s France state visit was a master class in the subtle and fine art of international diplomacy,” Dowling wrote. “Even die-hard critics seemed to pause for a moment to admire the multi-faceted diplomatic itinerary that went off without a hitch.”

Dowling noted that when the Macrons arrived at Joint Base Andrews, they were given a bouquet of purple irises — the national flower of France.

“At the intimate state dinner, meticulously planned and executed by the first lady herself without a coterie of consultants and planners, guests reveled in the elegant setting of a candle-lit State Dining Room,” Dowling wrote. “In the manner of Jacqueline Kennedy, the first lady planned and executed an impressive series of symbolic activities that demonstrated the power of style and cultural diplomacy when carried out on the high profile White House stage.”

“There is inherent meaning in the symbolism surrounding the White House and the ability to bring citizens together around shared values and ideals,” Dowling wrote. “While individual details of a state visit may seem innocuous or even frivolous, including the selection of flowers, linens, china, and menu for the dinner, they actually have much greater significance.”

“The details roll up into a larger narrative that fosters a dialogue between leaders of nations and their citizens, highlighting common bonds and a shared cultural heritage,” Dowling wrote. “A White House state dinner is perhaps one D.C. ritual that allows us to dial back political vitriol and celebrate time-honored traditions in a non-partisan way.”

Dowling noted that the state dinner also reflects how the first lady — not bringing the usual political pedigree to the White House — is making her mark in her role as the nation’s highest-ranking hostess.

“Even before the state dinner, there were clues that it would be a departure from previous years,” Dowling wrote. “Pared down and pared back, the first lady wanted the focus to be on the diplomatic tasks at hand.”

“A smaller guest list, a streamlined menu and skillful deployment of the White House collection (rather than the use of rental tables and china), all placed emphasis squarely on the honored guests and eased the burden on taxpayers, too,” Dowling wrote. “Even the decision to move the press preview of the décor and table settings to the night before the dinner had implications for how everyday Americans experienced the event.”

“Instead of seeing a mock-up table in an unrelated setting, we caught a glimpse of the actual dinner, set up in the actual venue of the State Dining Room, exactly as it would appear – candlelight and all — when guests entered the room, adding an unexpected touch of inclusiveness and transparency,” Dowling wrote. 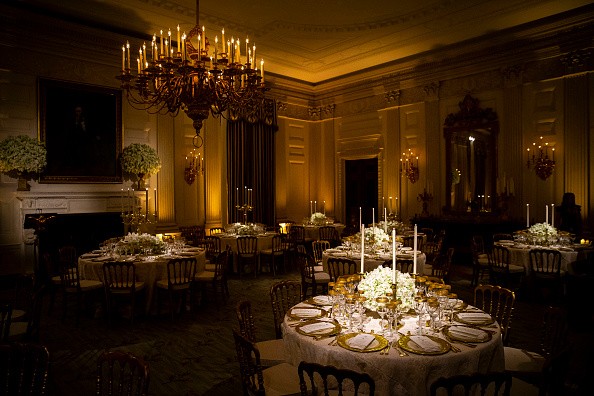 And, of course, Dowling, known for her signature French garden-style flower arrangements, was impressed with the role that flora played at the event.

“When the guests arrived in the East Garden Room for Tuesday’s state dinner where they were announced to the press, the functional space was transformed into a formal garden setting featuring a classic treillage design adorned with flowers and greenery, set off by classic architectural motifs,” Dowling wrote. “The French garden theme continued in the Grand Foyer and Great Hall with cherry blossom branches in large urns arranged in an allee formation, representing the great gardens of Paris as well as the iconic cherry trees surrounding the Tidal Basin, the most symbolic emblem of spring in Washington, D.C. 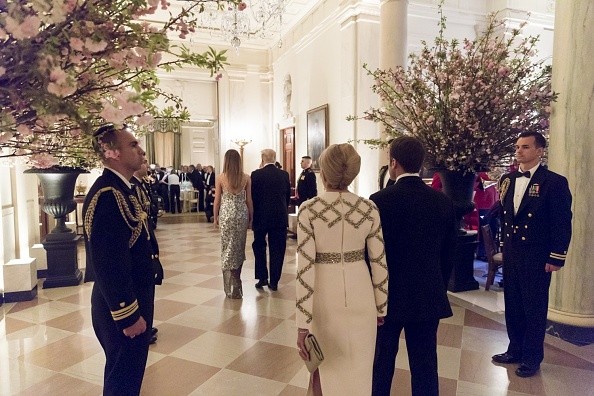 President Trump and the First Lady at a state dinner with the President of France and Mrs. Macron (Official White House Photo by Andrea Hanks)

Dowling noted that the first lady also paid tribute to her predecessors by the table settings she chose, which included china from the Clinton and Bush administrations that “not only honored these former first ladies but continued the theme of classical architecture and gardens in the overall design.” 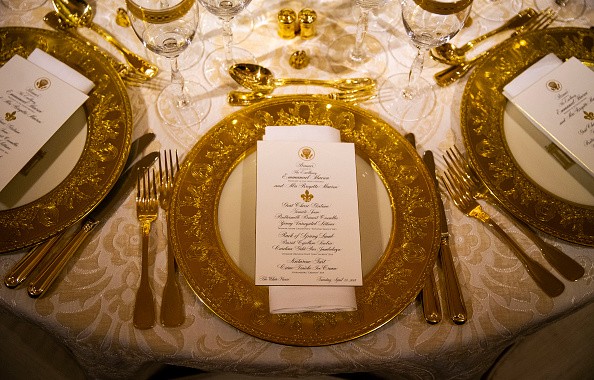 “In both style and substance, the dinner conveyed key themes: a focus on understated elegance, a nod to history and tradition, and a commitment to reducing costs and increasing efficiency,” Dowling wrote.

And the first lady’s command of the first state visit went beyond the state dinner, Dowling wrote.

“Perhaps the most striking moment of the entire week was not when the first lady walked out to the arrival ceremony wearing a sharp, tailored suit and that incredible white hat, but when she strode to the top of the podium to stand alongside the President rather than go over to the sidelines to be seated with other guests,” Dowling wrote. “In that moment, she sent a powerful message of partnership and support, solidified her central role in orchestrating the entire France state visit, and proved the point it’s possible to speak volumes by saying few words.”

“It was an impressive and formidable statement of White House cultural diplomacy,” Dowling wrote.