Sacha Baron Cohen is the target of a new billboard criticizing the comedian after he duped Gov. Sarah Palin and other Republican figures into a series of prank interviews while disguised as a disabled military veteran.

Conservative street artist Sabo’s latest piece plasters over a billboard advertisement in Los Angeles for CBS’s Young Sheldon with a photoshopped image of a wheelchair-bound Cohen donning a U.S. Army T-shirt and “Make America Great Again” cap. To the left of Cohen, who is depicted with a prosthetic leg, reads the following text: “Sacha Baron Cohen Walks Away With A Hit … and a touch of stolen valor. Who is America? Sat, 9pm. CBS.”

Sabo told the Hollywood Reporter he sent a crew to erect the billboard early Monday morning in response to Palin’s experience with Cohen. 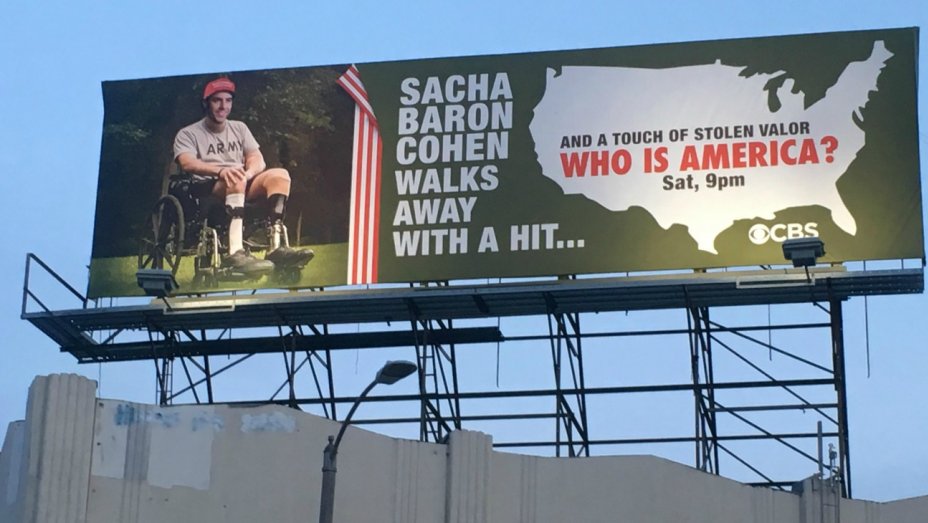 Palin took to Facebook last week to express her anger with the prank. “Another list of unfunny lies, this time typewritten for all to see; a pathetic attempt to punk not just my daughter and me again, but now the public,” Palin wrote. “Thank God people are wise to Hollywood’s BS & said, “Enough.”

“CBS/Showtime: want me to share more about the unethical and perverted deception you’ve perpetrated on the public?” the former lawmaker asked the network. “No one in your organization(s) have the balls to return my calls or provide their real names; would be nice now so we may discuss which Vets organizations will receive the show’s profits.”

Former Illinois Congressman Joe Walsh and Sen. Bernie Sanders are all among a handful of public figures tricked into prank interviews with Cohen in the series, which debuted on Sunday.