TAIPEI, Taiwan — Tensions between the Chinese communists on the mainland of China and capitalists here in the democracy Taiwan are rising. This was confirmed Wednesday as a top official of the Taiwanese Republic of China government told Breitbart News that Taiwan will never “bow to” the communists across the water.

Dr. Chiu Chui-cheng, Taiwan’s deputy minister of mainland affairs who handles relations across the 180-mile-wide Taiwan Strait with mainland China for the democratic government here, said during an interview in his office that the Chinese under Xi Jinping are a serious threat to global stability, safety, and security.

“For the past two years, China has increased its military threat and presence against Taiwan including circling of their aircrafts and vessels including most recently the crossing of the median line above the Taiwan Strait which has not been seen for 20 years,” Chiu said, speaking partially through a government translator, when asked about the rising tensions by Breitbart News. “China’s hegemony has been expanding, and breaking the status quo above not only the Taiwan Strait but also the whole region. Its intentions of invasion and expansion is not only directed at Taiwan, but also around the world.”

Breitbart News is among a group of international media outlets which sent journalists invited here for a series of economic, security, and cultural briefings by the Taipei Economic and Cultural Representative Office (TECRO) in the United States. TECRO is Taiwan’s counterpart to American Institute in Taiwan (AIT), a de facto embassy of Taiwan in the U.S. AIT is the American de facto embassy to here. This informal, unofficial arrangement is necessary because the People’s Republic of China (PRC), the communist government on the mainland, refuses to engage diplomatically with any nation that engages diplomatically with the Republic of China (ROC)—Taiwan’s government—because the PRC contends it is the rightful leader of Taiwan.

The ROC, originally a military dictatorship that later became a democracy celebrating vibrant capitalism in the late 20th century, retreated to Taiwan from mainland China in the late 1940s after World War II when the communists on the mainland led by Mao Zedong won China’s civil war.

The PRC has always contended that the ROC is illegitimate and that it should control Taiwan, even though the communist mainland government has never had control here. 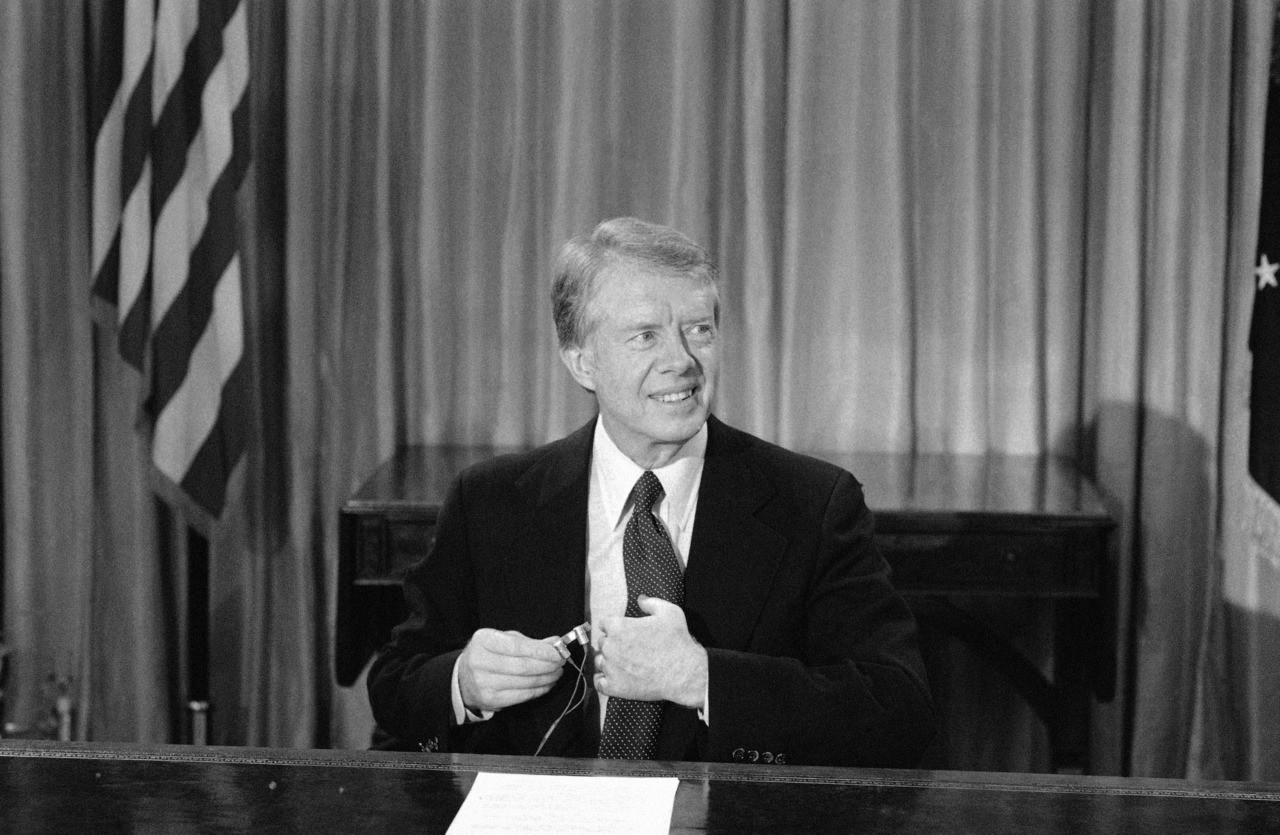 President Jimmy Carter adjusts a microphone before appearing on television from the Oval Office in Washington on Friday, Dec. 10, 1978. He announced that the United States will grant diplomatic recognition to Communist China on New Year’s day, sever diplomatic relations with Taiwan, and hold a summit meeting in Washington with Communist Vice Premier Deng Hsiao-Ping. (AP Photo)

When the ROC fell back to Taiwan, the United States kept diplomatic ties officially for more than two decades with this government but in 1979 under a major cloud of secrecy and bipartisan opposition in Congress then Democrat President Jimmy Carter switched the U.S.’s official diplomatic recognition to the communist mainland government from the ROC here.

In response, an overwhelming bipartisan majority in Congress rallied behind the Taiwan Relations Act which established the deep unofficial ties between the United States and Taiwan, including among other things the U.S. and Taiwan helping each other in the political, business, cultural, and—perhaps most importantly—national defense arenas.

President Carter signed the bill into law, and it has endured since 1979 in paving the framework for the relationship between the U.S. and Taiwan. In addition, later, the United States President Ronald Reagan would issue the “Six Assurances,” clarifying the U.S. position on Taiwan’s sovereignty distinguishing potential misinterpretation of the Three Communiques that established U.S.-PRC relations.

The Taiwan Relations Act also establishes a process through which the U.S. sells weapons to Taiwan for its national defense. This week, President Donald Trump’s administration made its third such sale in as many years in office, a move hailed in Taipei.

Chiu’s joint interview with Breitbart News and the other media outlets here as part of this delegation to Taiwan comes at a moment of particularly heightened tensions between the mainland and island authorities, as China on March 31 sent two fighter planes across the median line of the Taiwan Strait—something it has not done in decades. That prompted a strong response from National Security Adviser John Bolton, Trump’s top security adviser.

Chinese military provocations won’t win any hearts or minds in Taiwan, but they will strengthen the resolve of people everywhere who value democracy. The Taiwan Relations Act and our commitment are clear. https://t.co/rPG1jLiaWY

Then this week China sent military aircraft and naval vessels into what Taiwan’s president said was Taiwan’s “vicinity,” a move clearly designed to try to intimidate Taiwan. This provocation came as top U.S. officials, including former House Speaker Paul Ryan and several current members of the House, were on Taiwan for a celebration of the 40th anniversary of the Taiwan Relations Act—and was clearly meant to send a message to the west and Taiwan.

President Tsai Ing-wen, the democratically elected president of Taiwan, spoke on Tuesday morning here in Taipei at the Indo-Pacific Security Dialogue conference offering harsh words for Beijing, including a threat that Taiwan is ready and able to respond militarily if it comes to that. She said:

As you may be aware, Chinese forces yesterday sent a large number of their military aircraft and labeled vessels into our vicinity. Their actions threaten Taiwan and other like-minded countries in the region. I want to tell you that Taiwan is not intimidated. These actions only serve to strengthen our resolve. Our military forces have the capacity, determination, and commitment to defend Taiwan and not allow coercion to dictate our future.

In response to the Chinese actions, it turns out according to a front-page above-the-fold Wednesday morning report in the Taipei Times, the Taiwan Air Force scrambled jets and ships to monitor what the Chinese jets and ships were up to. There were no open hostilities, but the fact that both militaries are engaged and active at this time is particularly noteworthy. Even so, China downplayed the actions as a routine exercise.

From the Taipei Times:

Taiwan scrambled jets and ships to monitor the Chinese forces on Monday, the Ministry of National Defense said, accusing Beijing of “trying to change the ‘status quo’ of the Taiwan Strait.”

China’s Taiwan Affairs Office said that Taipei was seeking to “slander” China and mislead the public with its criticism of the exercises to provoke confrontation.

“No person or any force should underestimate our firm determination and strong ability to defend the country’s sovereignty and territorial integrity,” it said.

The People’s Liberation Army Daily said the goal of the drills was to practice a “combined firepower assault” that included electronic jamming from aircraft under the protection of fighter jets.

Bombers “screamed” toward the area and carried out “sudden attacks,” while warships occupied assault positions and conducted attacks on enemy fire points, the official paper of China’s military said.

Landing forces reached specified waters, which were circled by helicopters at low altitude.

The paper cited a Chinese military representative as saying the exercises were held annually and “completely within the normal legal rights of a sovereign country.”

In his interview with Breitbart News and other outlets, Chiu said that the United States’ support especially under the Trump administration is particularly appreciated in Taiwan—but that the Taiwanese intend to ensure their own defenses:

We appreciate that the United States has abided to the Taiwan Relations Act as well as the Six Assurances and continues to provide defensive weapons for our defense. However, there is also a steadfast determination for Taiwan to increase our own self-defense capabilities and we will not bow to the intimidation of the Chinese.

Chiu added that it is the goal of Taiwan to continue the partnership with the United States and other like-minded countries on these matters.

“Whether it’s the United States Indo-Pacific strategic or engagement in the Indo-Pacific areas, we will continue to work with the United States as well as like-minded countries to be a stable force and responsible force in this region,” Chiu said. “This year marks the 40th anniversary of the Taiwan Relations Act, and you can see Taiwan and the United States has established a comprehensive and cooperative relationship and it is our goal to maintain that.”

Chiu also said that the recent rising tensions can be directly attribute to actions and aggressions that the Chinese side of the matter have taken, noting that it was Xi who proposed earlier this year what Taiwan considers an untenable proposal for unifying Taiwan back with mainland China. Chiu said Xi’s proposal pushed cross-strait relations into a “great and compressed threat.” 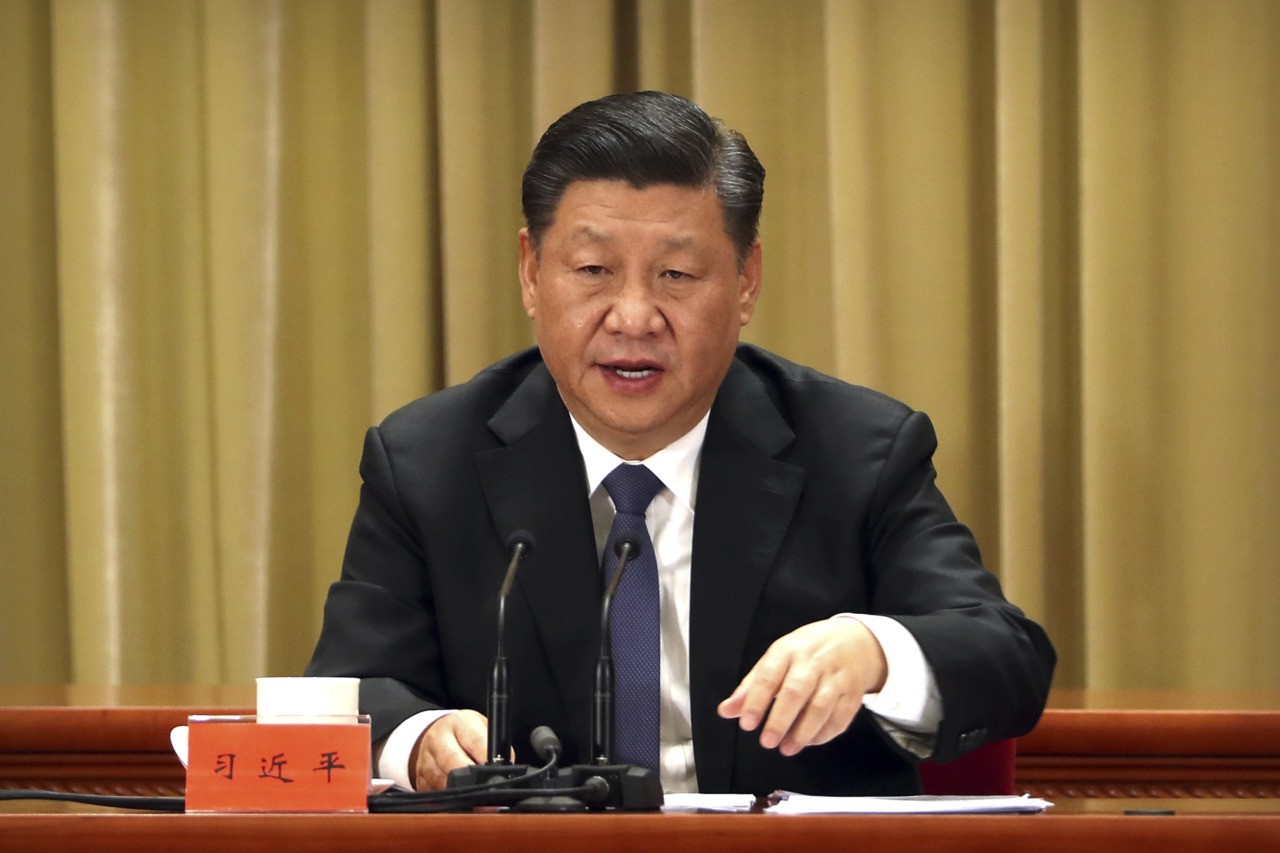 Chinese President Xi Jinping speaks during an event to commemorate the 40th anniversary of the Message to Compatriots in Taiwan at the Great Hall of the People in Beijing, Wednesday, Jan. 2, 2019. Xi urged both sides to reach an early consensus on the unification of China and Taiwan and not leave the issue for future generations. (AP Photo/Mark Schiefelbein, Pool)

“On January 2, the China president Xi Jinping laid out five points—the one country, two system model for Taiwan—to push for eventually unification,” Chiu said. “As a result the cross-strait relations have now entered into a great and compressed threat. In response to the immense national security challenges posed by China, President Tsai laid out the four ‘musts’ and a three-part security network for cross-strait relations.”

Indeed, Xi has dismissed Taiwan’s sovereignty as a “dead end” and has even threatened the use of force to take Taiwan under communist control.

“We make no promise to abandon the use of force, and retain the option of taking all necessary measures,” Xi said earlier this year.

While also noting that official diplomatic conversations are not happening at this time, Chiu noted for the reporters present that it is Taiwan’s position that the country would like to open diplomatic discussions with the mainland with no preconditions entering the talks. The communists on the mainland have refused to enter talks with Taiwan without preconditions—and he said that Beijing has “violated our national sovereignty.” He added:

We hope the two sides can sit down and talk as soon as possible without any political preconditions. We hope the two sides can spread the wisdom and the possibility of bringing together for a win-win future. Since President Tsai took office, the government has committed to maintaining the status quo and the cross-strait stability. We are trying every possible means to avoid provocation and confrontation and restrain from causing the tension and the military conflict but the Beijing authorities have attempted to violate our national sovereignty politically, economically, diplomatically, and militarily by attacking and taking advantage of our free and open democratic system. They also engage in information warfare, spreading disinformation and trying to divide our society from within.

This report is the second of many to come from Breitbart News’ latest reporting trip in Taiwan.