Getting Back in the Greatness Groove

For President Trump, it’s starting to look a bit like 2016 again. And for MAGA types everywhere, that’s good news.

The president is likely still savoring the positive headlines on his recent infrastructure initiative, such as this, from Breitbart News on April 30: “Chuck and Nancy Applaud Donald Trump’s $2 Trillion Infrastructure Plan.”

For its part, the Wall Street Journal joined in, reporting that House Speaker Nancy Pelosi and Senate Minority Leader Chuck Schumer offered “unusually positive comments about negotiations with the president.” Said Pelosi: “This is a collaborative effort and we hope it will be very bipartisan … It’s about jobs, jobs, jobs.” And Schumer added: “There was goodwill in this meeting, and that was different than some of the other meetings that we’ve had.”

So we can see: There’s real hope for bipartisan agreement on infrastructure—and since power in Congress is divided between the parties, nothing will happen without bipartisanship.

Yet even if both parties are on board, it’s still possible to identify the likely biggest winner, namely, Trump. On May 1, the day after the White House conclave, Politico’s morning e-blast, Playbook, took up the question of who stands to gain the most:

Who wins here? If a deal comes together–and it’s too early to say either way–who reaps the political rewards? A successful deal would be a massive boon to Trump, who would be able to say he is the dealmaker he promised to be and can even work with Democrats, who were investigating him. If it falls apart, Trump probably also benefits: He can say Democrats couldn’t even say yes to a $2 trillion jobs project!

It’s hard to argue with that assessment: It’s a massive boon to Trump if an infrastructure bill passes, and if it doesn’t, a great opportunity to blame congressional Democrats. (Earlier this year, I wrote about the “Truman Strategy” of running against the opposition in Congress; it did, after all, work for Harry Truman in 1948.)

And for some more historical perspective on the politics of infrastructure, we might recall the experience of an earlier Republican president, Dwight Eisenhower. Back on June 29, 1956, Ike signed the Federal Aid Highway Act, authorizing the interstate highway system. The interstates, of course, were one of the most pro-growth public undertakings in the history of the U.S. And oh, by the way, in November 1956, Eisenhower was re-elected in a landslide, carrying 41 states. 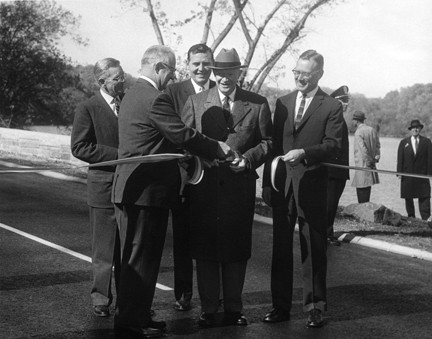 For yet more perspective on the infrastructure issue, we might simply recall the year 2016. Back in that historic presidential election contest, Trump campaigned as a different kind of Republican; that is, he was not a GOPer fixated on such familiar—and unpopular—GOP traps as fighting foreign wars, opening the border, and skimping on needed domestic investments.

In particular, a key part of Trump’s differentiation was his call for a massive infrastructure package; here’s a headline from the New York Times on August 2, 2016: “Donald Trump Proposes to Double Hillary Clinton’s Spending on Infrastructure.” The article quoted the New York developer as saying, “We have bridges that are falling down. We have many, many bridges that are in danger of falling.” Those words were self-evidently true; after all, just a few years before, the I-35 bridge had collapsed in Minneapolis, killing 13 and injuring 145. 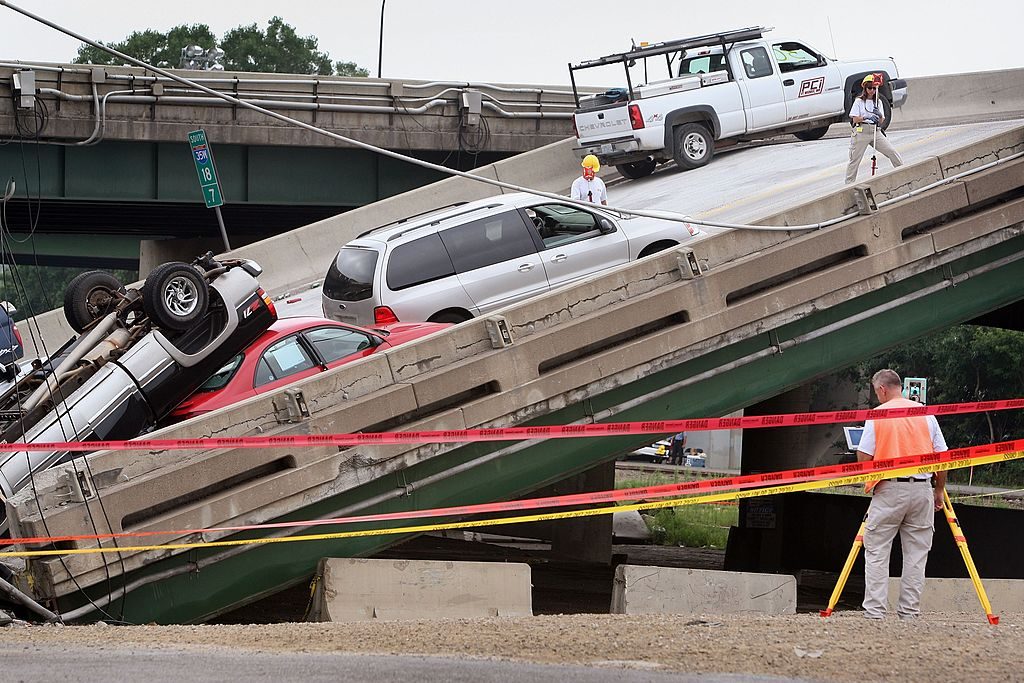 And as we remember, in 2016, the country responded to Trump’s message. He was the first Republican presidential candidate in three decades to carry Michigan, Pennsylvania, and Wisconsin, and it was those three states, boasting 46 electoral votes, that put him over the top. (Trump won 306 electoral votes, and he needed, of course, 270 to win.)

So when Trump came into office two-and-a-half years ago, all the signs for Making American Infrastructure Great Again were promising. Yet then the White House floundered; it let itself get tangled up in budgetary bean-counting, as well as attempting to design a program centered on “public private partnerships” (PPP).

PPP are a great idea, in theory, but then, just about everything is a great idea—in theory. The problem is that in practice, PPP can be everything from a good deal to a bad deal for the public. That is, they’re a good deal if they truly leverage private investment for the sake of a worthy public project, but they’re a bad deal if they simply privatize some public function in a disastrous, even scandalous, manner, as happened when the city of Chicago turned over its parking meters to a foreign company.

So it’s no wonder that in recent years, public sentiment has turned sharply against PPP; all too often, rightly or wrongly, they are seen as simply privatization—that is, turning things over to private-investor sharpies, who then slap a toll on something that the public used to enjoy for free. Here’s a typical sniping headline: “Trump Wants to Sell Our Water to Wall Street.” Thus we can see: If the idea of PPP is to regain widespread acceptance, projects will have to be better conceived, and better pitched.

Yet in the meantime, in 2017 and 2018, the political system dismissed the White House’s PPP-heavy infrastructure effort. Here, for example, is the headline from the Hill on June 9, 2017: “Trump’s ‘infrastructure week’ goes off the rails.” And the following year, a similar headline in the HuffPost on February 15, 2018: “Trump’s ‘Infrastructure Week’ Crumbles Again.” Later in 2018, Politico added an unsparing header: “How infrastructure week became a punchline.”

Happily, now, in 2019, Trump has absorbed the lesson of past frustration. According to Jonathan Swan of Axios, who late last month had the scoop on the new infrastructure initiative, the president had come to label those earlier infrastructure efforts as “Gary’s plan”—referring, of course, to his former economic adviser Gary Cohn, the Goldman Sachs careerist whom Trump doesn’t miss. 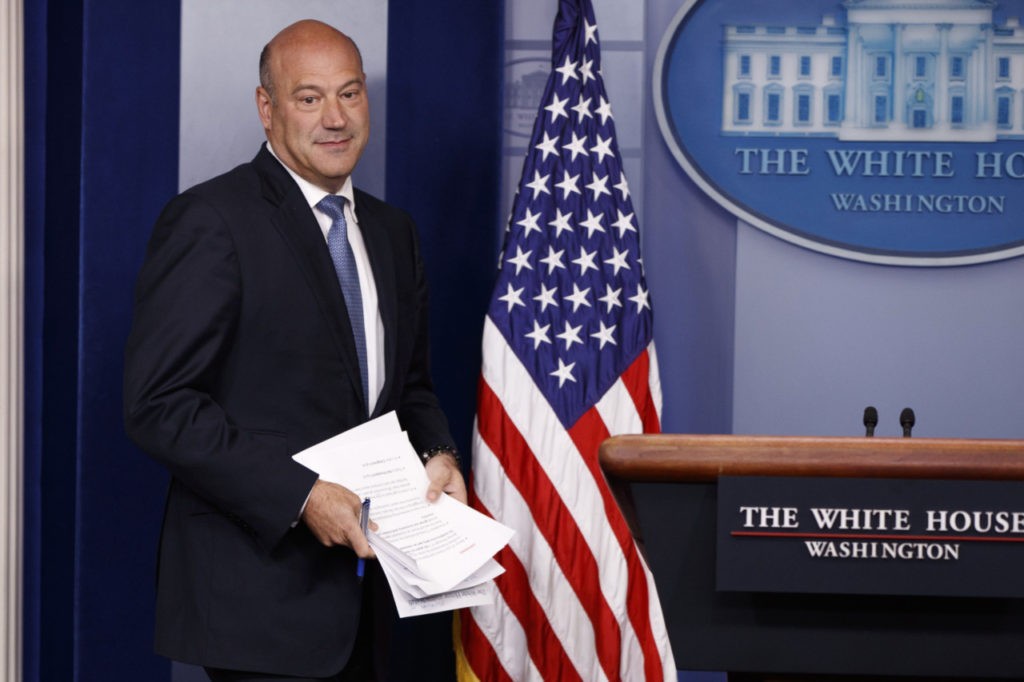 In other words, Trump is now willing to commit real money—federal money—to his infrastructure push. It’s that shift that has gotten the Democrats interested.

And without a doubt, the need is real; a report card published by the American Society of Civil Engineers grades America’s infrastructure to be a “D+.” So if Trump wants to improve said infrastructure, and create good jobs at good wages, the time is now—because the country is worth it.

One key question, of course, is how to pay for all this new building and constructing. Two trillion, after all, is a lot of dollars.

First, there’s the idea of raising taxes. Raising the gasoline tax is a common suggestion, and it is true that it hasn’t been raised since 1993—a long time ago. On the other hand, the idea of a regressive tax increase isn’t too popular these days, and no American incumbent wants to go through what French President Emmanuel Macron has been going through after he raised gas taxes.

As an alternative, Democrats have suggested raising other taxes, including a partial or complete rollback of Trump’s 2017 Tax Cuts and Jobs Act. (I worked in support of that tax bill.)

The problem with any sort of tax increase, of course, is that it could neutralize the effect of the infrastructure plan. Yes, more infrastructure is good, but so is enhanced American economic competitiveness, greater private economic activity, and more money in people’s pockets. So it’s not surprising that Senate Majority Leader Mitch McConnell has already issued a firm “no” to any such tax-cut rollback.

Moreover, there’s little evidence that Trump himself wants to pay for his infrastructure plan with a big tax increase that would fracture the conservative coalition. After all, why would he want to mess with an economic boom—3.2 percent growth in the first quarter of 2019, double the rate of 2016—on the eve of his own re-election campaign?

Second, there’s the possibility of finding new revenue from some unexpected source. One such idea is the Generating American Income and Infrastructure Now Act (GAIIN), which was proposed in the last Congress, and which Breitbart News’s Matthew Boyle wrote about recently. As Boyle put it, the idea behind GAIIN is “selling off government debt and then using the proceeds for infrastructure funding and debt reduction.”

Specifically, GAIIN targets loans held by the U.S. Department of Agriculture, bearing a face value of $155 billion. At present, these loans are typically non-performing; that is, they aren’t being paid off. And so the idea is that they could be sold to someone better at collecting money than the USDA—and in the meantime, Uncle Sam would get the cash infusion. (In addition, some advocates point to a total of $2 trillion in loans on the government’s books.)

The GAIIN approach sounds tempting, at least at first, and yet upon closer examination, significant problems appear. For instance, there’s the question: Which bad loans? Would they be, for example, loans to family farms and related businesses that have been buffeted by, for example, trade disputes with China and other countries? Mindful of the need for a careful balancing of trade objectives and domestic pain, the Trump administration has struggled to compensate farmers in the midst of this trade dispute—which was never about farmers, anyway. So now, what would happen with GAIIN? Would the USDA loans be sold off to Wall Street types who would then hire professionally ruthless debt-collectors? Does Trump, or the GOP, really want to cause a wave of foreclosures in the farm belt? 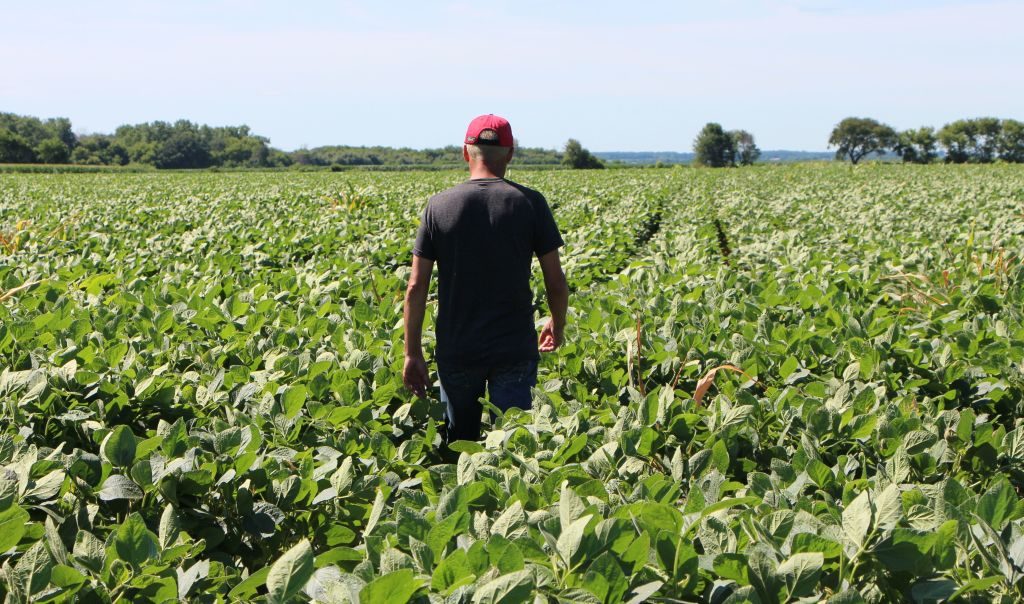 Third, there’s the possibility of simply borrowing the money to pay for infrastructure. Yes, the national debt is more than $22 trillion, and that’s a lot of money, but about $6 trillion of that is held by the government itself—which is to say, it’s really an accounting fiction. The true debt is the debt held by the public, including the foreign public, and that totals about $16 trillion.

Yes, even that lesser number seems daunting, but we must ask ourselves: compared to what? After all, a debt is manageable, so long as you can make the payments. It’s worth noting that the total household wealth of the United States is more than $100 trillion, and the absolute wealth of the country is up around $300 trillion. So it’s obvious: We have plenty of debt-carrying capacity. Moreover, as I have also observed, if we were to add the mineral wealth of the country, buried under federal lands and waters, we could add, at least, another $100 trillion.

In fact, it’s because of all this wealth, actual and potential, that the financial markets are untroubled by U.S. debt.

In addition, the whole wide world is awash in capital: That’s why interest rates are so low. To be sure, rates are higher than they were earlier in this decade—and in fact, as recently as April 30, Trump has criticized these rate hikes as unnecessary and harmful to growth. Yet even so, the federal funds rate is lower than at any time in the ’90s, ’80s, or ’70s.

In any case, the critical issue with borrowing is what you get for the debt. That is, if you borrow the money to pay for a productive asset, you’re being smart. And that seems to be Trump’s idea: We should be smart about borrowing for better roads, newer airports, and improved technology, such as 5G.

As Trump said in 2016, as he talked up his campaign infrastructure package, “We’re going to go out with a fund. We’ll get a fund, make a phenomenal deal with low interest rates and rebuild our infrastructure. We’d do infrastructure bonds.”

Now, in 2019, Trump seems to be reclaiming that sort of big and bold thinking. And given how close the polls are, that’s a good thing.

So can he make use of artful deal-making with Democrats, and also with Republicans—some of whom are openly skeptical? Can he use the presidential bully pulpit to make his case? Can he bring home the infrastructural bacon?

The 2020 election could well hinge on the answers to these questions.