Rep. Rashida Tlaib (D-MI) falsely claimed that Palestinians provided a “safe haven” for Jews fleeing the Holocaust, ignoring both the collaboration of Palestinian leaders with Hitler and Palestinian opposition to Jewish immigration.

Philip Klein of the Washington Examiner, who flagged Tlaib’s flagrant distortion of historical fact, noted that she made her comments “on a podcast called ‘Skullduggery’ in an episode titled ‘From Rashida with Love.'”

(Tlaib’s comments are at 28:11 in the podcast, offered in defense of her view that Israel should be abolished in a “one-state solution” to the Israeli-Palestinian conflict.)

In the interview, Tlaib said, “There’s always kind of a calming feeling I tell folks when I think of the Holocaust,” meaning that she felt a sense of moral reassurance because of “the fact” [sic] that Palestinians “to create a safe haven for Jews, post-the Holocaust, post-the tragedy and the horrific persecution of Jews across the world at that time.”

In fact, Palestinian leaders — such as former Grand Mufti of Jerusalem Hajj Muhammad Amin Al-Husseini — collaborated openly with Hitler and the Nazis. 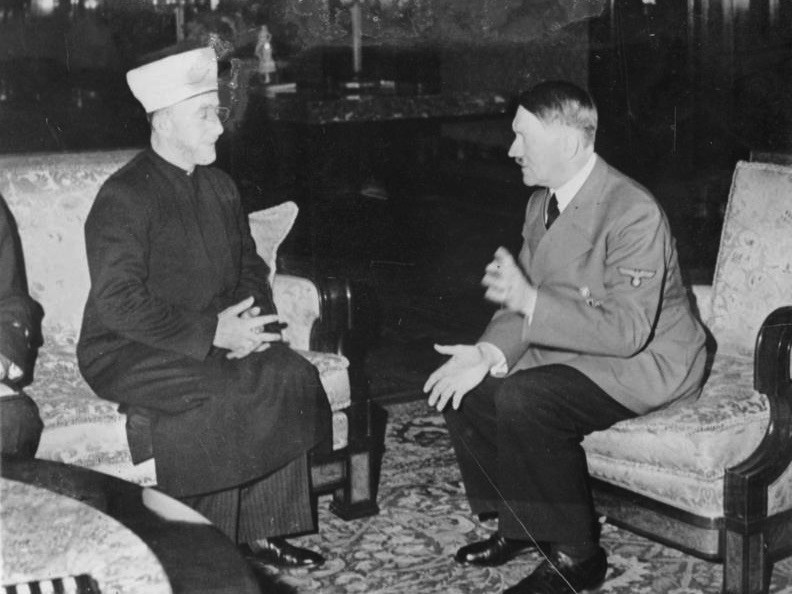 “In the presence of Ribbentrop, the Foreign Minister of Foreign Affairs, the Fiihrer received the Grand Mufti of Palestine, Sayid Amin al Husseini, as a cordial and meaningful conversation for the future of the Arab countries.” (German Federal Archive / Wikimedia Commons)

During World War II, the mufti was involved in the mobilization of support for Germany among Muslims. In November 1941, the Mufti met with Hitler. Although he continued to be involved in politics, al-Husseini’s influence gradually declined after the defeat of the Arab armies in 1948.

Many Palestinian Arabs vigorously — and violently — opposed Jewish immigration into Palestine, both before and during the Second World War, when it was clear that Jews faced persecution (and worse) in Europe.

Moreover, according to historian Benny Morris, Palestinian Arab leadership actually rejected a “one-state solution” offered by the British prior to the Second World War because the British insisted that they accept 75,000 new Jewish immigrants. They wanted a full stop to Jewish immigration.

Though there are several dozen Muslims who are recognized as having helped save Jews, these heroic acts occurred in other countries.

After the Second World War, Palestinian Arabs continued to oppose Jewish immigration, and Palestinian Arab forces attacked the nascent State of Israel, joining armies from surrounding Arab countries in an effort to quash the Jewish state.

Palestinian Authority president Mahmoud Abbas wrote his Ph.D. thesis denying aspects of the Holocaust, and delivered a speech in 2018 in which he appeared to defend Nazi Germany’s decision to murder Jews.