Special Forces, past and present, came to Washington, DC, on Sunday to participate in the annual Rolling Thunder ride, where thousands of motorcyclists ride to the Capitol and back to honor those taken prisoner of war or those missing in action.

The Special Forces Brotherhood Motorcycle Club, abbreviated as SFBMC in a patch over their hearts, came from around the country to participate in the solemn event and to catch up with one another, who they consider to be family. 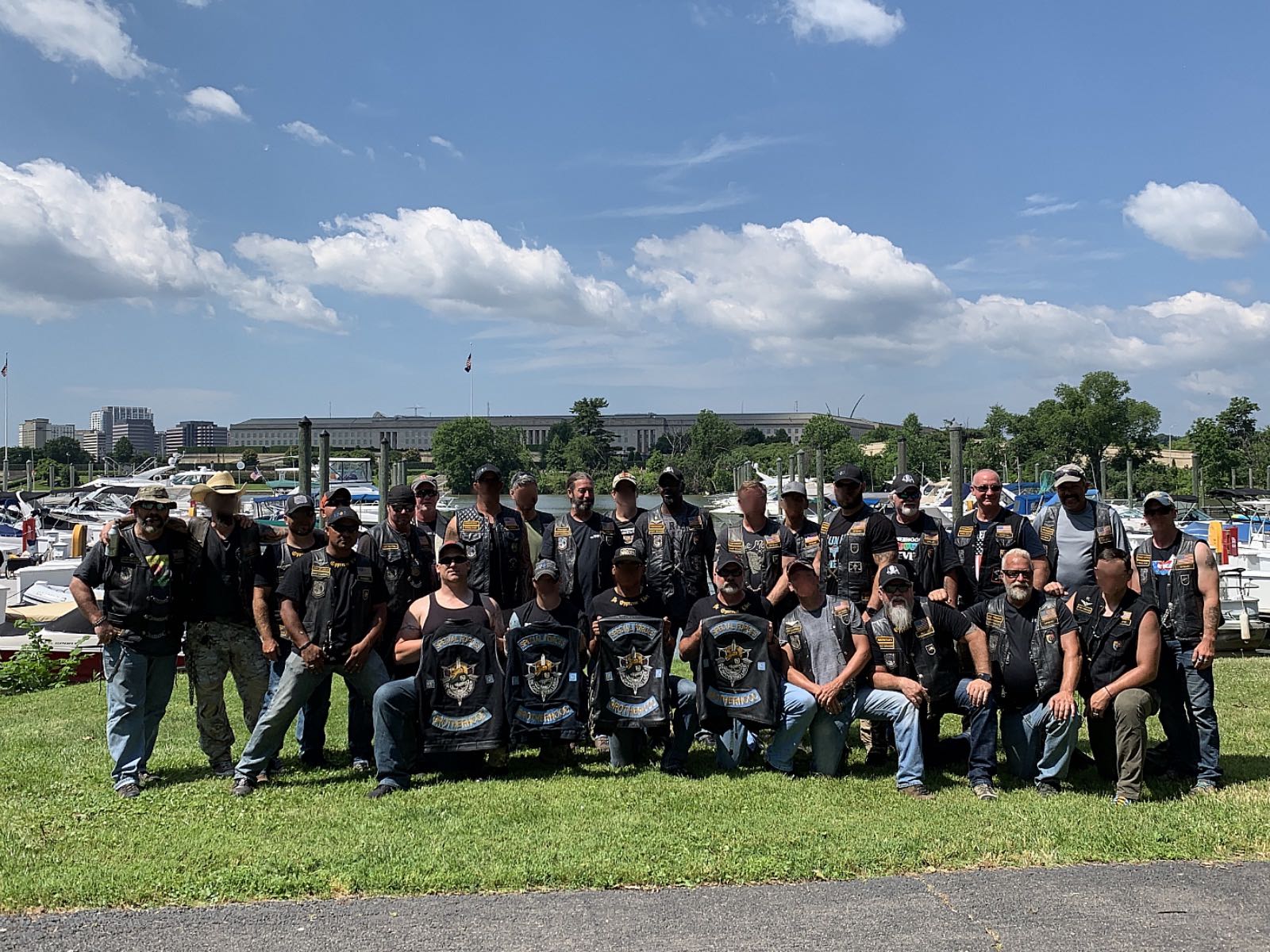 They came from all over the country, from Fort Bragg in North Carolina and as far as from Yuma, Arizona. They were active and retired, young and old. Many came with wives and girlfriends. Some came by themselves. But all were amongst friends.

To become a member of the SFBMC is no easy task — candidates must earn their way in. There is a vetting process to become even a prospective candidate. Candidates must have worn the Special Forces tab honorably. Ultimately every member must approve the candidate’s entrance into the club.

Full members don a black leather or canvas vest with a “Special Forces” patch at the top. Below it is the Special Forces insignia. At the bottom is a “Brotherhood” patch. On the front, each member wears their chapter names. There are chapters all over the country.

The day before the ride, they stopped at Arlington National Cemetery, to honor the brothers who have given the ultimate sacrifice. This year, they laid a Green Beret at the tomb of President John F. Kennedy, the president who officially stood up the Green Beret regiment. 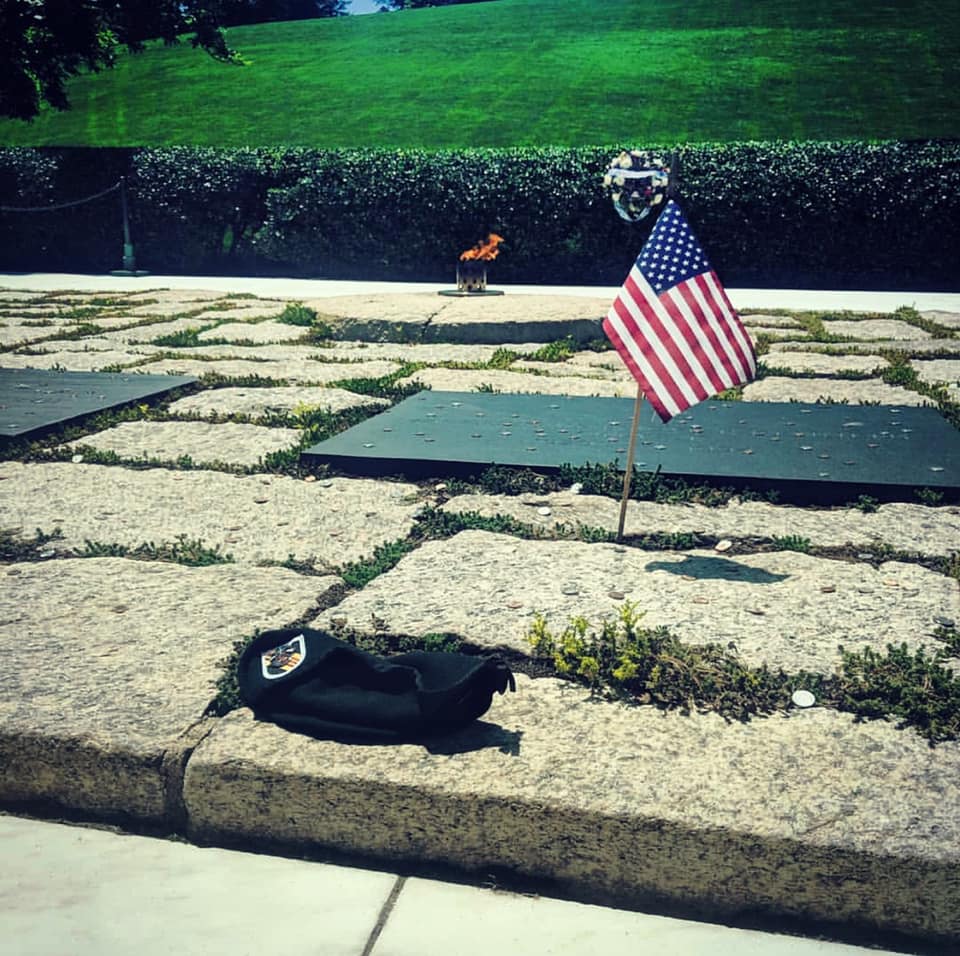 They went to Section 60 to visit their fallen brothers in the long wars of their time — Iraq and Afghanistan, where many Green Berets have deployed multiples times. The club started in 2006, at the height of the Iraq War.

They visited the graves of Shawn Thomas, Logan Melgar, Andrew Ross, Eric Emond, Jason Thomas, Anthony Yost, and Alfonso Molinar, just to name some. The names are still rolling in.

At each grave, they reflected on the man they knew and loved, clearing throats, and furtively wiping away tears. They poured drinks for their friends. Sometimes they swapped funny stories.

“Let’s put it this way — you don’t want everyone to be a Jamie. But you always want a Jamie,” one Green Beret said fondly as they gathered around Jamie Otts’ grave. 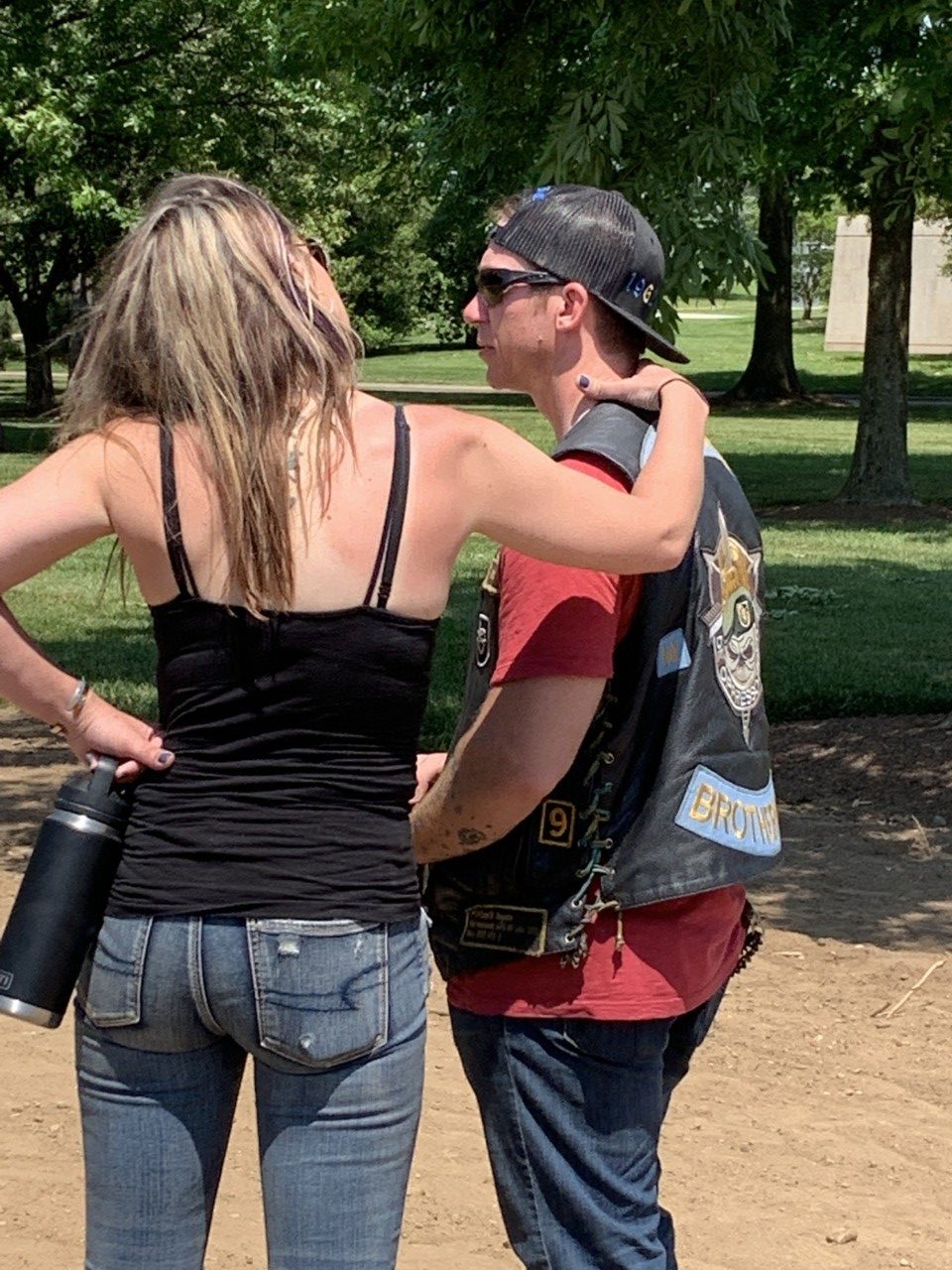 They laughed and cried together at Alfonso Molinar’s grave. “He loved Flaming Hot Cheetos with Cholula and animals. The only reason I have animals is because they were our first babies together,” his fiancée Lee Blackwell said. 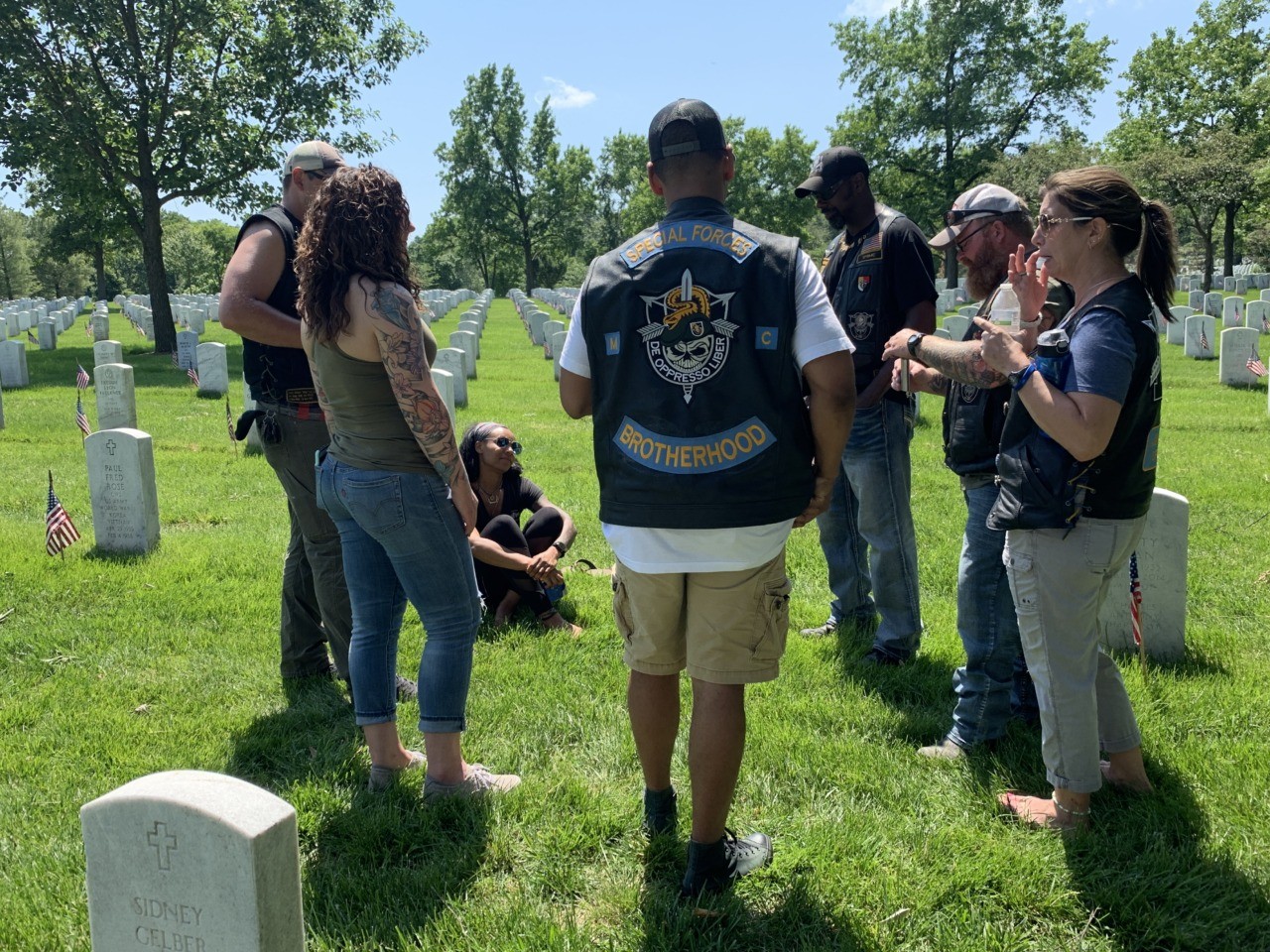 On Sunday before sunrise, they gathered at a hotel parking lot in Fairfax, Virginia, just outside the Washington beltway. They checked engines, rolled into formations, revved engines, and carried American flags. Around 5:30 a.m. they rolled out, towards the Pentagon staging ground. 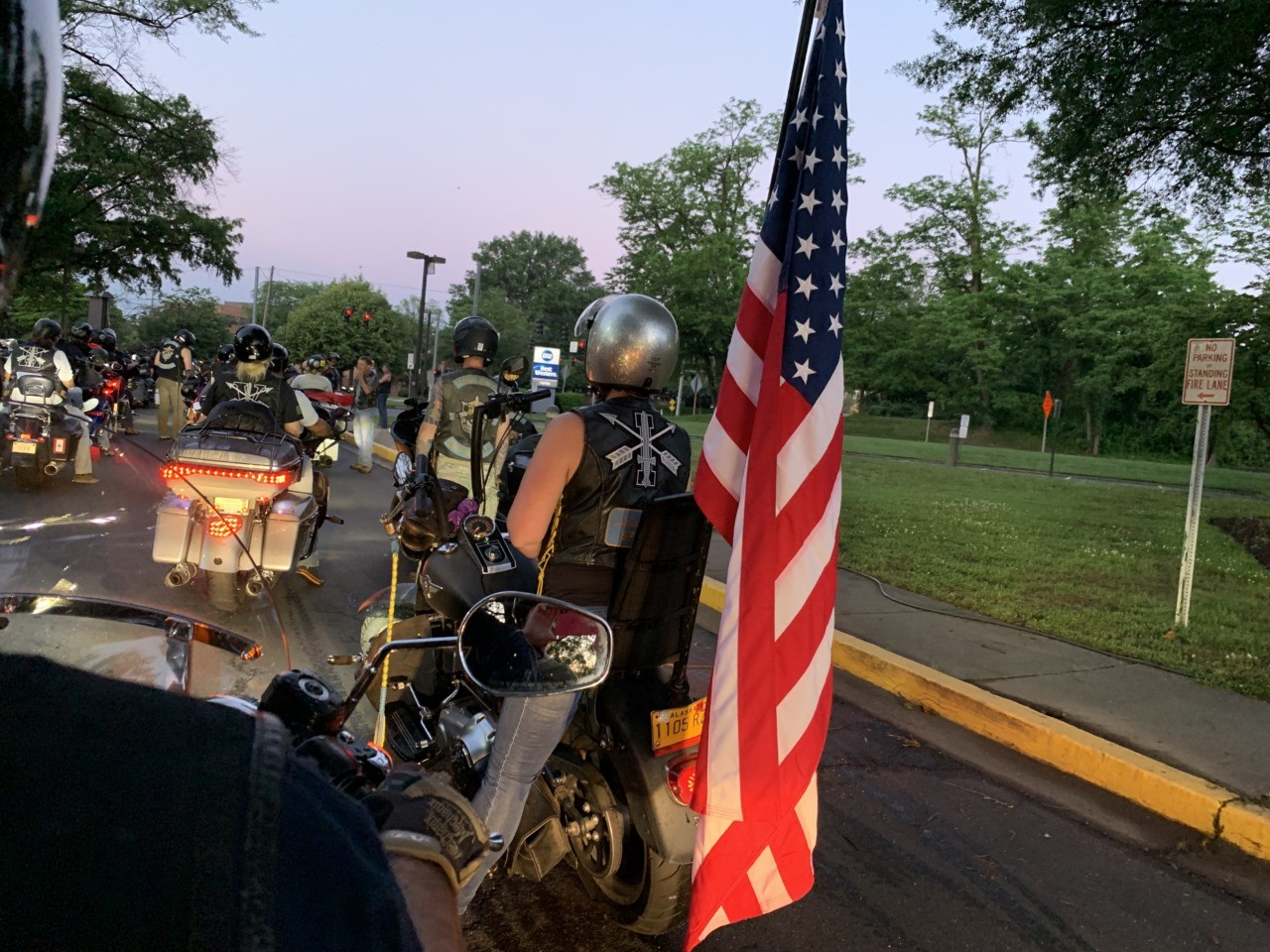 They arrived at the Pentagon, the sun rising in the horizon over the Potomac River. They pulled into a parking lot, already filled with hundreds of motorcyclists. They trekked across a bridge to a hidden restaurant and bar near the water, where they caught up with each other over breakfast and Bloody Marys. About an hour in, Harley Davidson’s CEO Matt Levatich and his wife Brenda showed up. A SFBMC member had invited him to join. 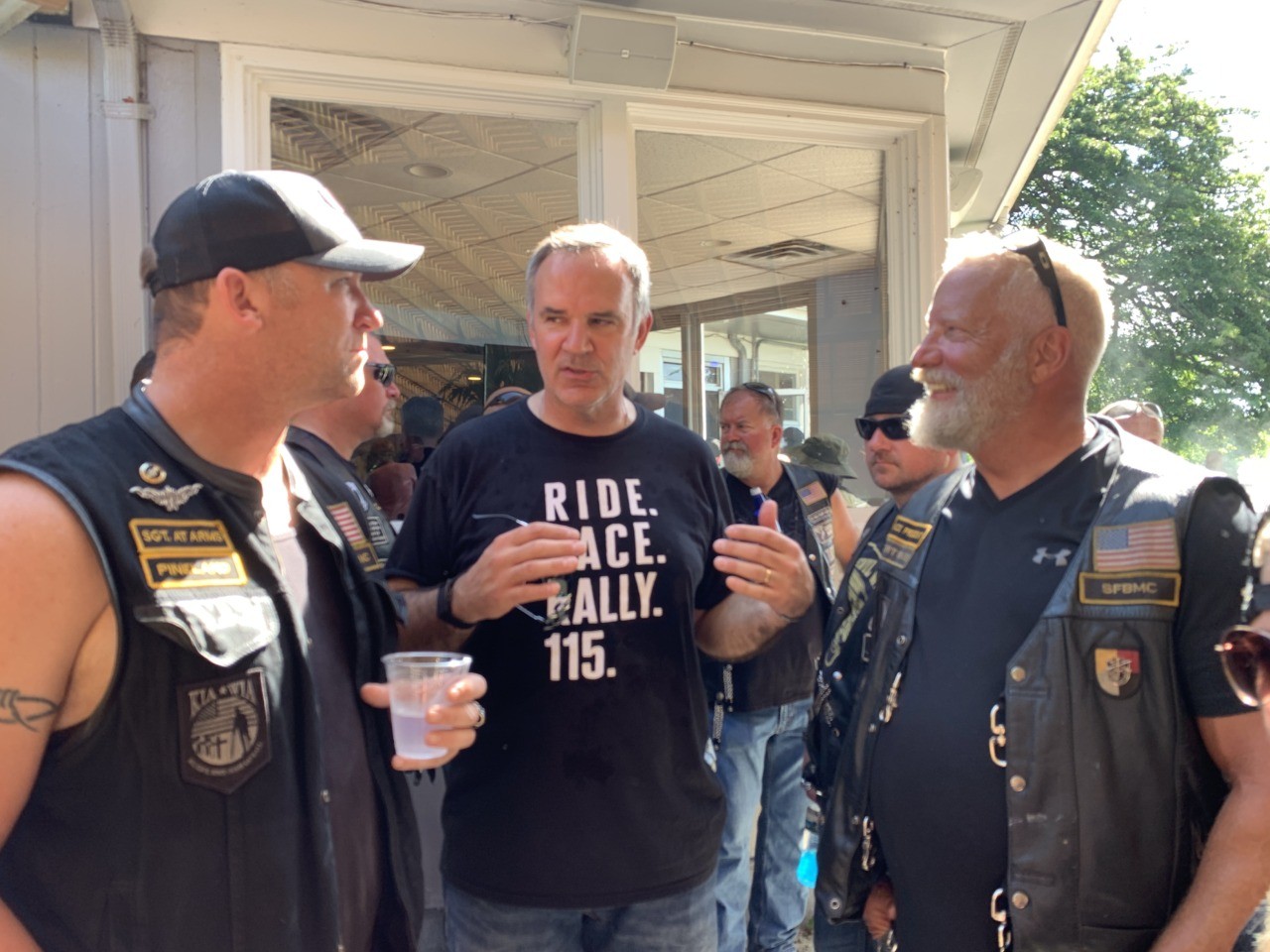 After class photos of both the SFBMC and the Ladies of the SFBMC, it was time to head back to their bikes for the official opening of the ride. But first, there was business to attend to. Members privately gathered in a circle on an isolated hill to initiate a prospective member into the brotherhood. A B-52 flew low over the Pentagon, emitting a scream and prompting cheers. 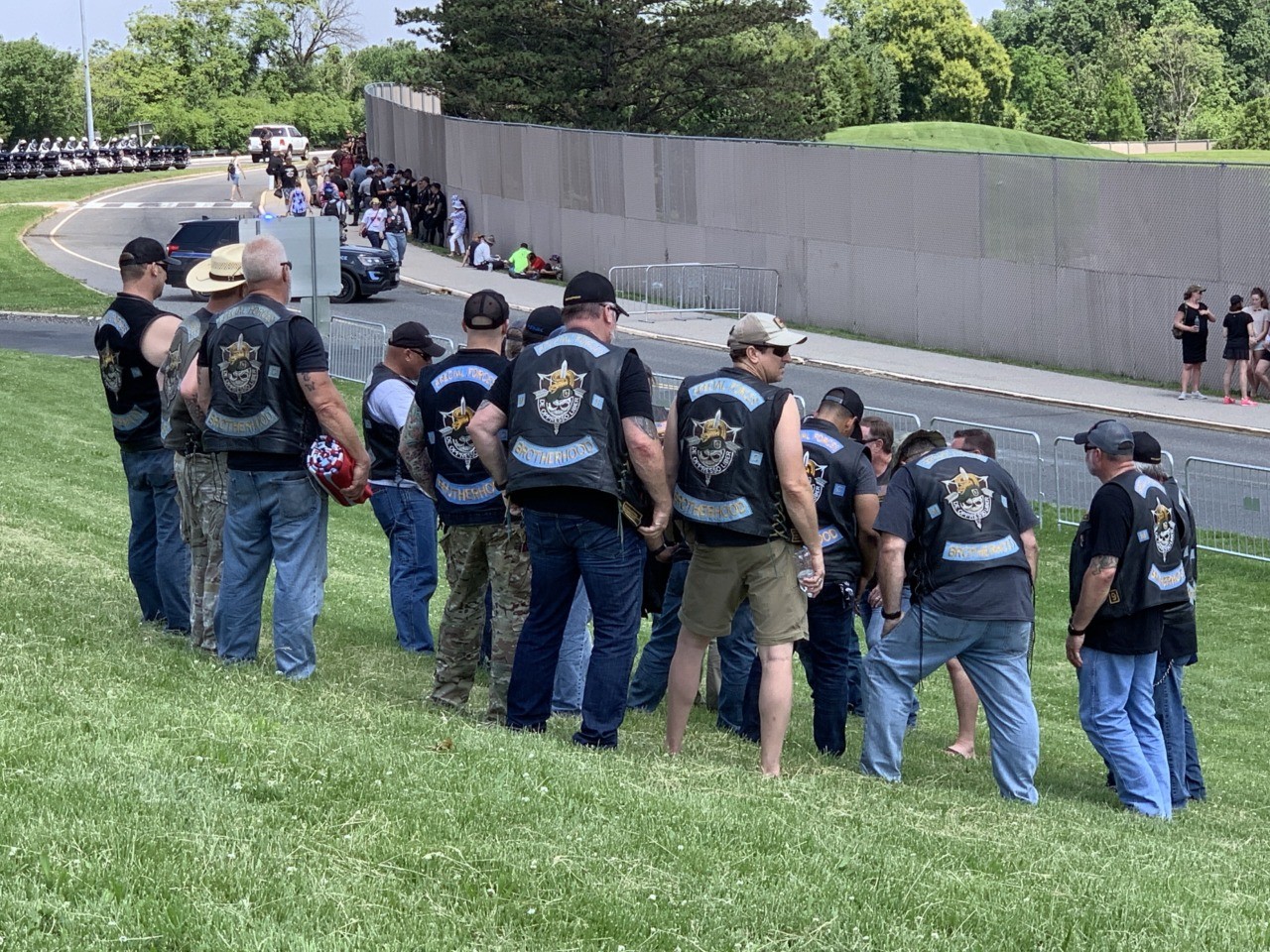 Back on the bikes, the SFBMC rolled out, one of the first groups out of hundreds participating due to their non-profit status and connections with the organizers. Some commented it seemed there were more bikers than usual, with this year’s ride expected to be the last out of Washington due to cost. But they noted President Trump’s tweet the day before: “Can’t believe that Rolling Thunder would be given a hard time with permits in Washington, DC. They are great Patriots who I have gotten to know and see in action. They love our Country and love our Flag. If I can help, I will!” 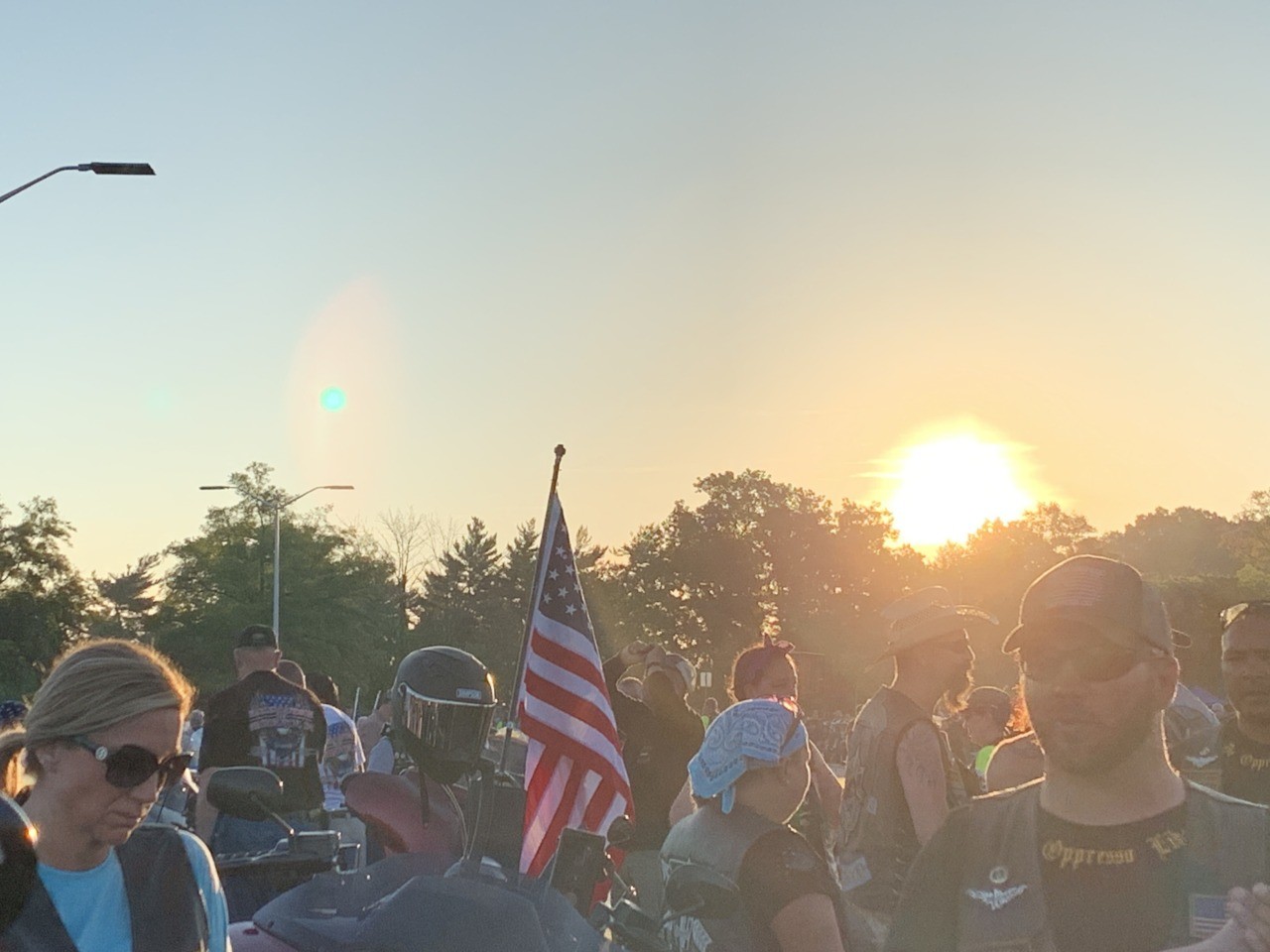 As the bikes rolled down the Memorial Bridge into Washington, DC, they were greeted with Americans on both sides, holding small flags, waving, and cheering. They held peace signs and saluted. They lined the streets all down Constitution Avenue all the way to the United States Capitol. They were parents, children, seniors, tourists, and Americans of every race. 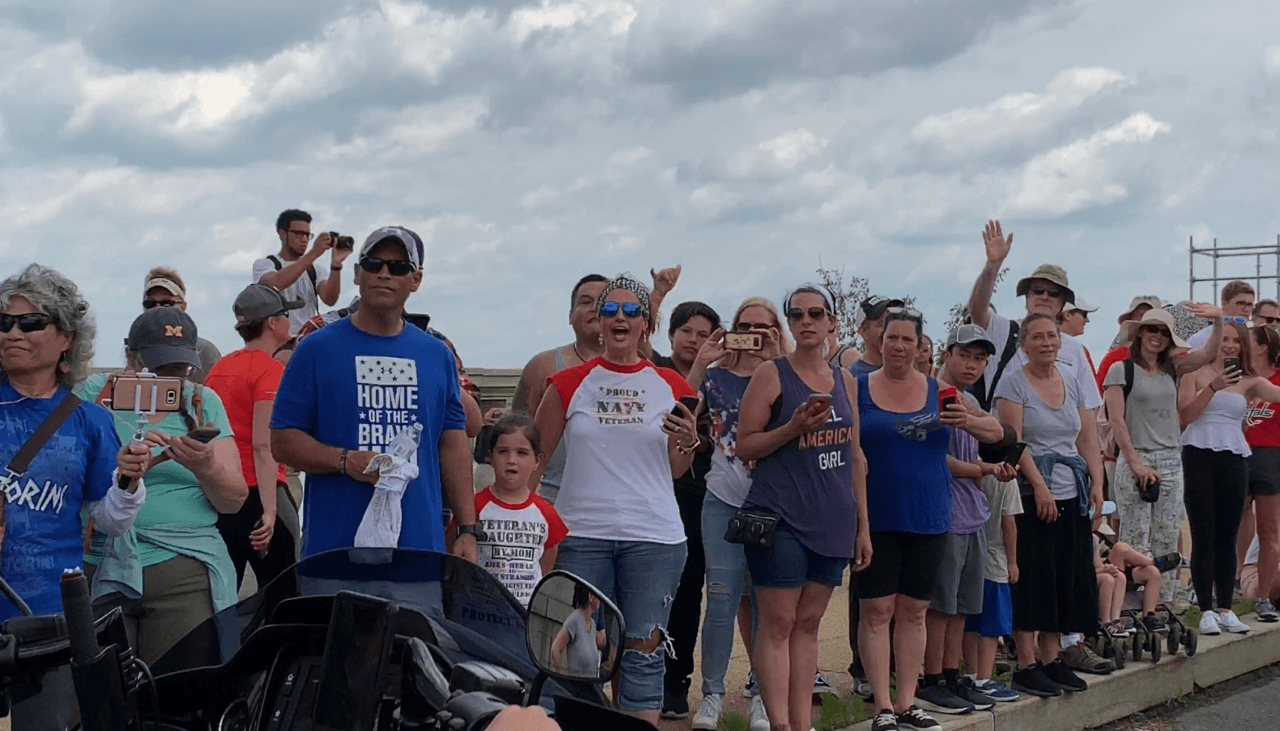 A Marine stood before a small dinner table set up with an empty chair, signifying the still missing. Still as a rod, he shouted out salutes to the riders.

SFBMC member Steve Baker was stoic. During the ride, he listened to patriotic music and thought about the brothers he lost along the way. Rain sprinkled intermittently later during the ride, like tears falling from the sky. 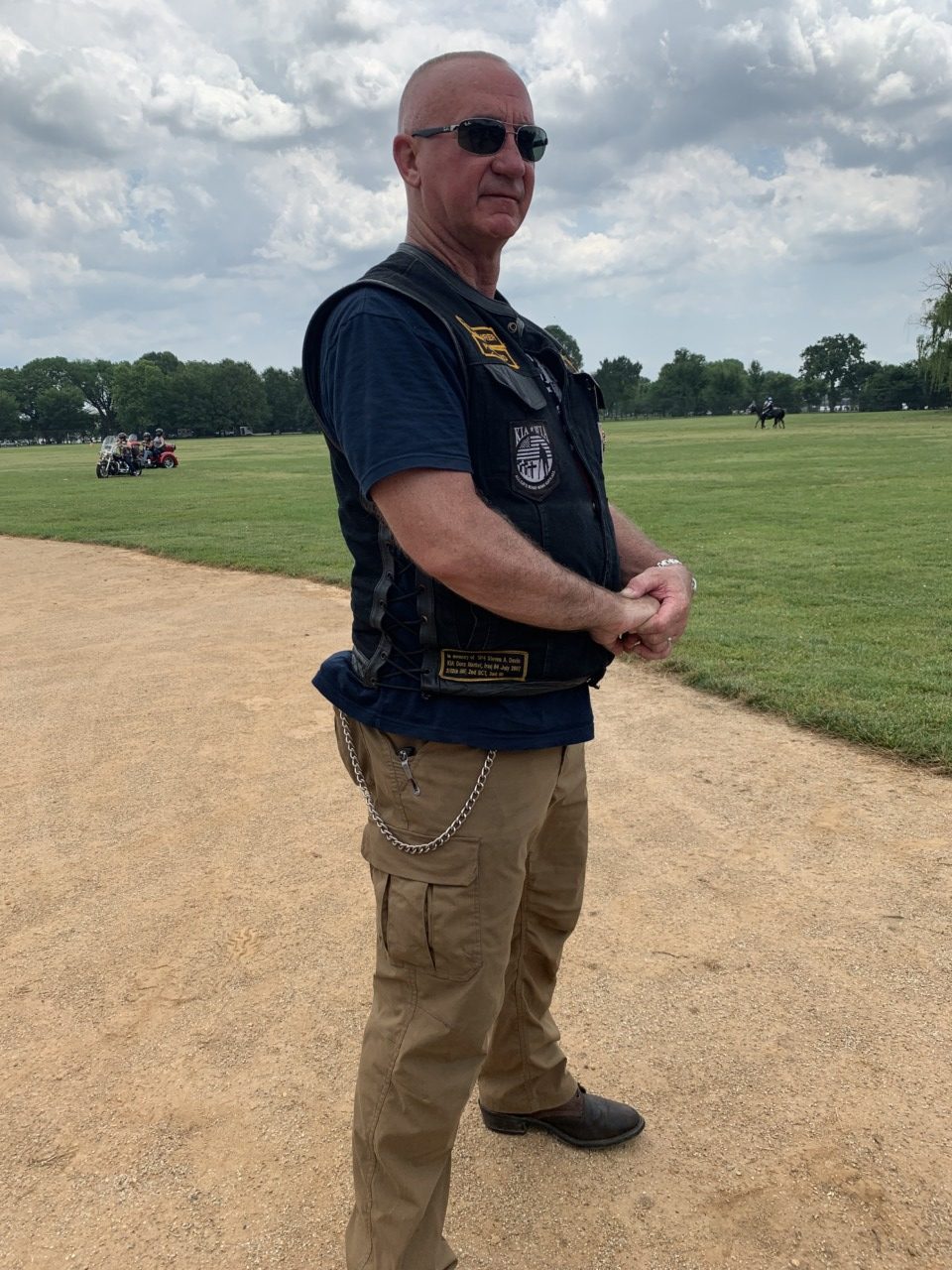 The SFBMC members disembarked at a grassy field and toured the nearby monuments. They cheered other riders on. 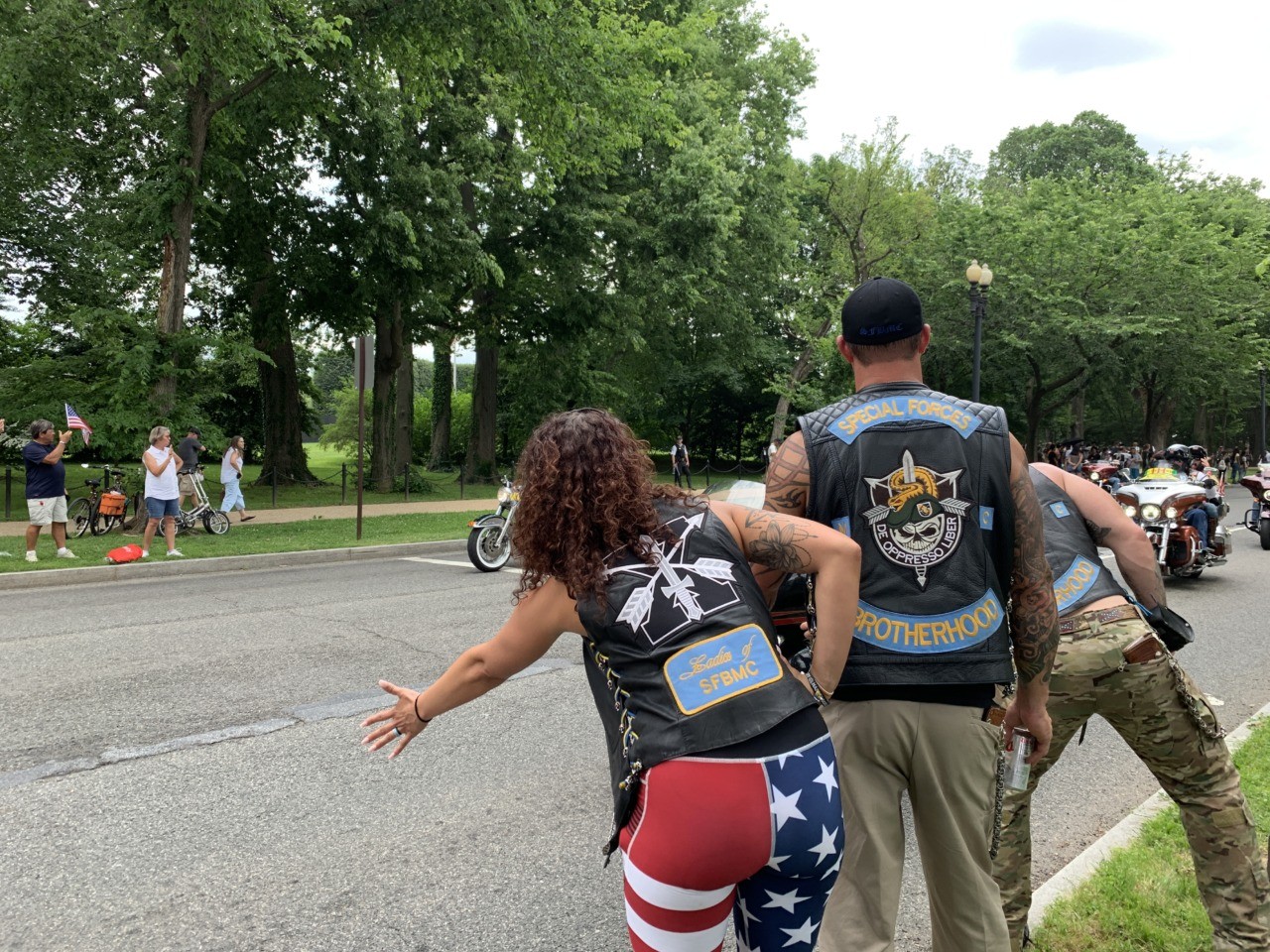 Many stopped at Thunder Alley, where street vendors sold patches, rings, t-shirts, BBQ, and gear. They chatted excitedly about Trump’s new tweet that came just that day: “The Great Patriots of Rolling Thunder WILL be coming back to Washington, D.C. next year, & hopefully for many years to come.”

Walking across the Lincoln Memorial, SFBMC members ran into Veterans Affairs Secretary Bob Wilkie, who came over and chatted with them. They discovered Wilkie went to the same high school as SFBMC Fort Bragg President Jaraan Little. 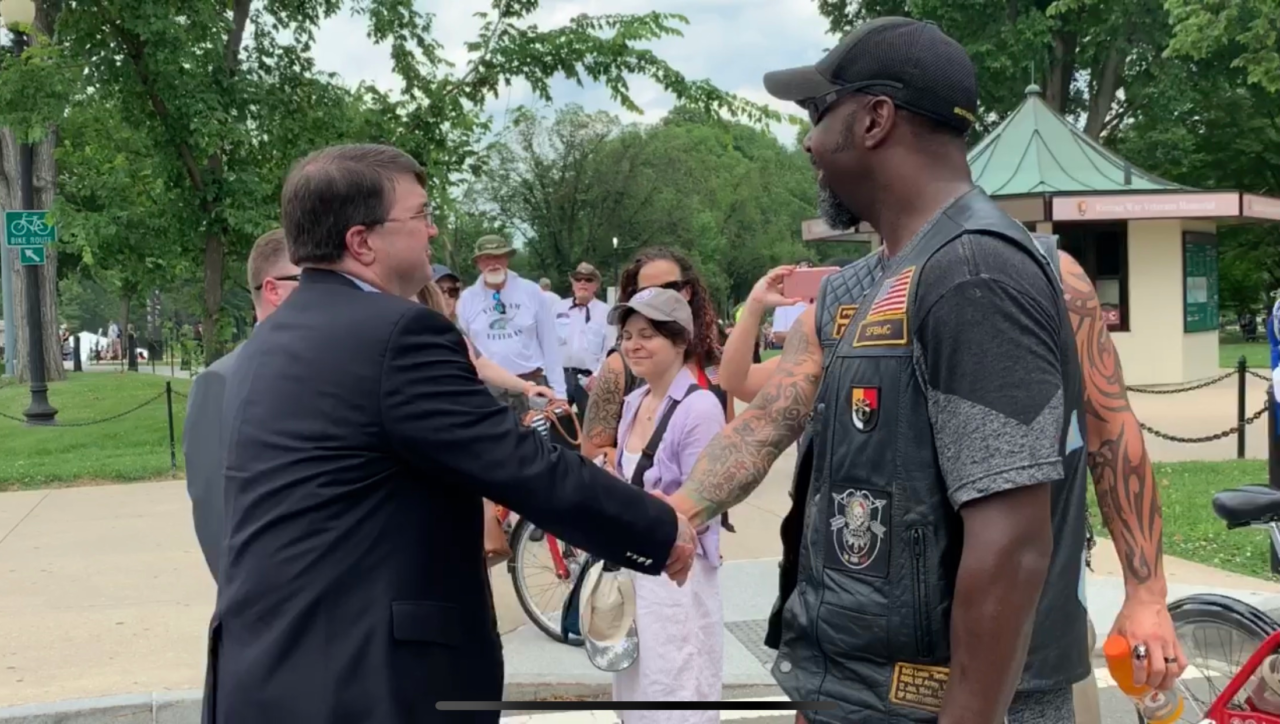 After several hours hydrating and helping an SFBMC member whose motorcycle went down near the beginning of Constitution Avenue, the brothers and the ladies readied to go back to their hotel. It was a long day, with temperatures reaching 90 degrees.

They rode solemnly back to the hotel, beating the sun that was now going down in the West.