NEW YORK — Thousands of people took to the streets of New York City Tuesday and Wednesday to call for regime change in Iran as Hassan Rouhani traveled to the Big Apple to address the 74th session of the United Nations General Assembly.

Your gathering in New York is a resounding “No!” to the policy of appeasement, to the policy of buying chances for a moribund regime, and to the policy of inaction toward a regime that preserves its power through warmongering, terrorism and suppression #IranRegimeChange #FreeIran pic.twitter.com/io0vCOFmXr

“If one can topple this regime without an organization and leadership, without overcoming thorny trials, and without paying the price and making sacrifices, we say: Please, go ahead, don’t delay,” she continued.

“The mullahs’ regime is weak and at an impasse. Its adventurism and evil acts in the region are expanded only because no other party has stood up to it,” Rajavi added. “At the same time, the people of Iran are the regime’s primary victims.”

1️⃣ the @UN seat belongs to Iranian people’s representative under the leadership of @Maryam_Rajavi
2️⃣We oppose any form of appeasement
3️⃣We support #MaximumPressure to isolate the regime #No2Rouhani pic.twitter.com/4mNHUQDNo0 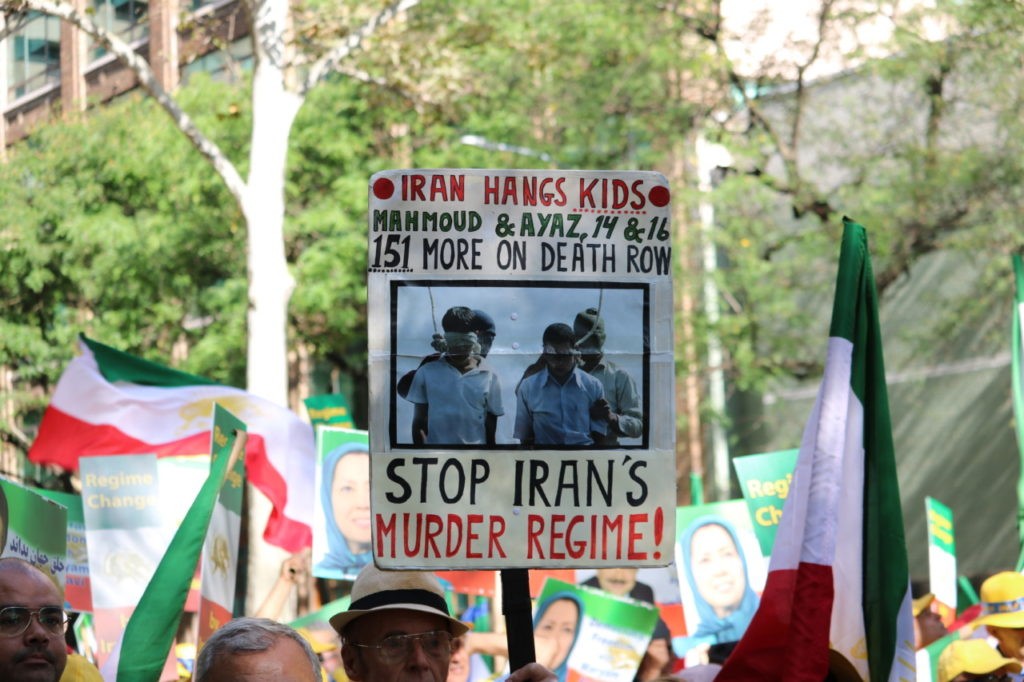 Invoke the multilateral UNSC “snapback” option now!#Iran is in violation of the all international agreements

Time to restore all UN resolutions that were in place before JCPOA! #UNGA #No2Rouhani @StateDept @realDonaldTrump @antonioguterres pic.twitter.com/YYuGoNrJ3K 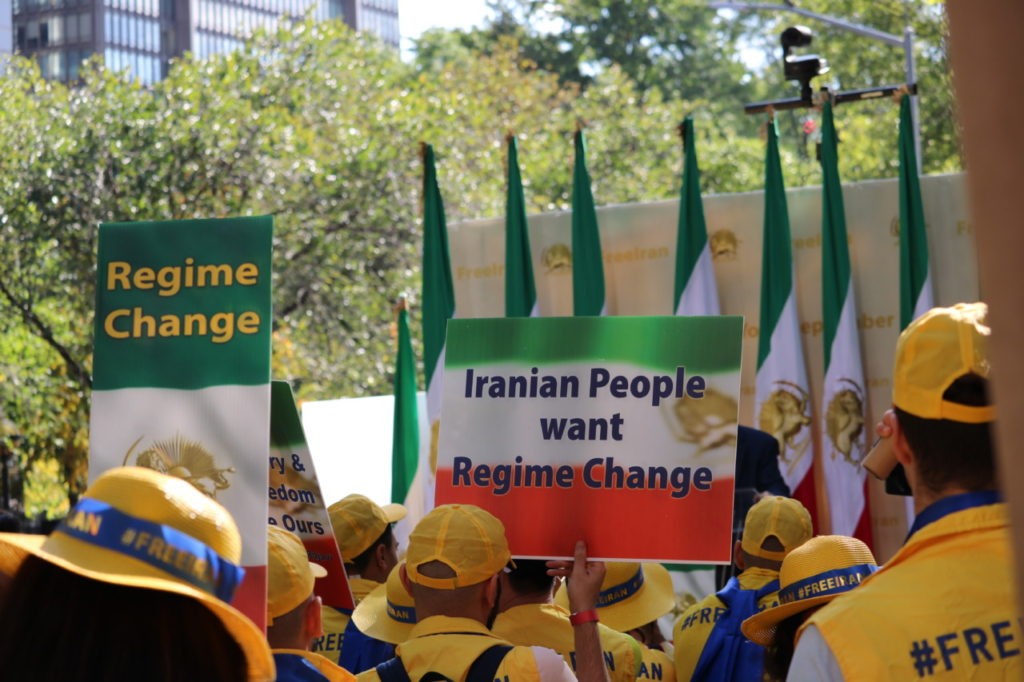 “The regime is seeing something that many are perceiving here in the west,” Giuliani said to the crowd. “They are seeing signs that they may be coming to an end. … This is the sign of a regime that’s crumbling.”

“I am speaking in my individual capacity,” Giuliani added. “I am for regime change. Down with the tyrants in Iran. Down with the ayatollah and the mullahs and all the crooks.”

Giuliani also praised Rajavi for her efforts regarding regime change in Iran, calling her a “great woman.”

NCRI can take over and run Iran like no other Regime Change models!
From Regime of terror to regime of democracy & freedom under leadership of madam Rajavi
It ends capital punishment and restore respect for women’s right!
#No2Rouhani #UNGA pic.twitter.com/pWTLj9XocR

“The regime’s aggressions still continues — our policies won’t change the behavior,” Lieberman said in regards to the Iranian regime. “It’s regime change that can solve the Middle East bloodshed. The NCRI’s ten-point plan is a guarantee for a prosperous, democratic and nuclear-free Iran. The NCRI has the broadest support in the U.S. and around the world.”

⚡️⚡️☄️
The way that soviets regime was dismantled, the Iranian people can do the same to mullahs!
The NCRI 10 point plan is a guarantee for A prosperous, democratic & nuclear free Iran

The NCRI has the broadest support in US and around the world!#Iran #No2Rouhani #UNGA pic.twitter.com/2huuzNEIP5

Keane took the stage where he also echoed Giuliani and Rajavi’s remarks in advocating for regime change in Iran.

“For almost forty years now, Iran has destabilized the Middle East with their maligned and aggressive behavior and after looking at it for almost four decades the only way that this is going to change, the mullahs are not going to change,” Keane told Breitbart News. “The regime has to change and likely that change will have to come from within.”

“What this administration is doing is finally beginning to break the foundation of the regime in terms of currency devaluation, inflation, civil unrest, drying up all their oil exports,” Keane added. “Iran is in a weaker place than they’ve been in nearly forty years, and they’re making desperate, stupid decisions as a result of it.”

Several Iranian youth were also in attendance for the rally as they gathered to protest against Rouhani’s presence at the United Nations General Assembly and “echo the people’s voice for regime change.”

Iranian youth at the #FreeIran rally today in New York City! Thousands of Iranians gathered to protest against terrorist Rouhani’s presence at #UNGA and echo the people’s voice for regime change! pic.twitter.com/JFj0hIytRO 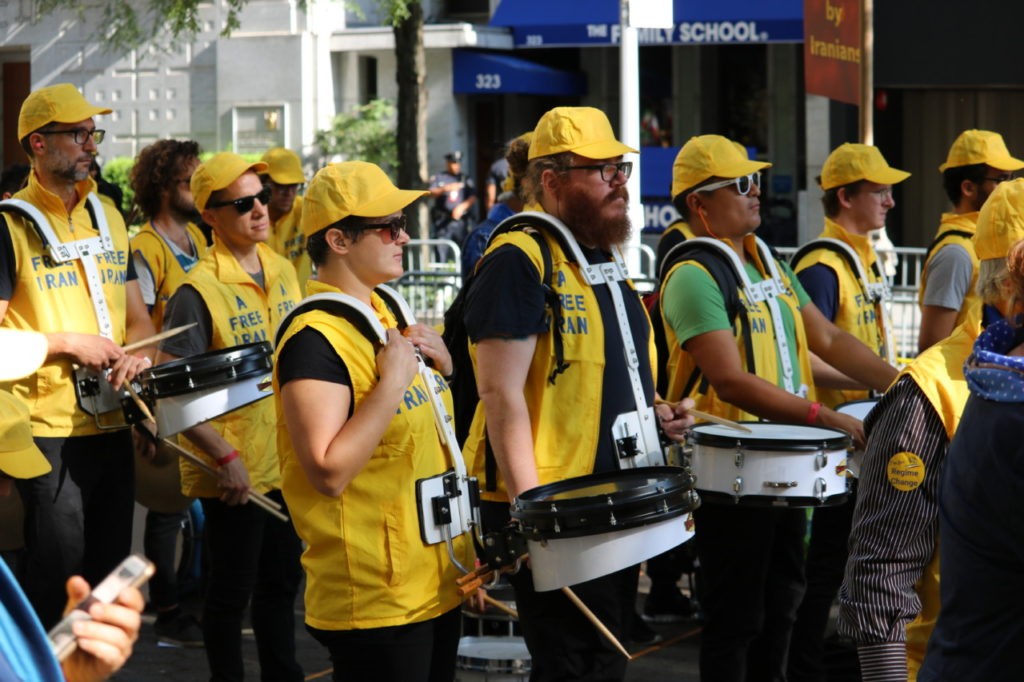 In June, thousands of Iranian-Americans also gathered in the streets of Washington, DC, to march and voice their support for those seeking regime change in Iran, an issue that past presidential administrations have seemed to avoid.