Former Vice President Joe Biden urged the U.S. government in 1998 to pursue a strategy to ‘dethrone’ Saddam Hussein over allegations the Iraqi strongman was hiding weapons of mass destruction.

Biden, the-then ranking member of the Senate Foreign Relations Committee, was one of President Bill Clinton’s most vocal allies in the battle to pressure Hussein to abide by terms established after the Gulf War requiring Iraq to destroy its stockpile of chemical weapons.

Hussein, chafing under economic sanctions, had ordered United Nations (U.N.) weapons inspectors to leave Iraq in 1997 over accusations of espionage.

Tensions only increased in the months afterwards, with Hussein refusing to even consider allowing inspectors to return unless economic sanctions were lifted against his regime. A particular sticking point arose when Hussein was accused of trying to expand his arsenal to include nuclear and biological weapons—commonly referred to as weapons of mass destruction.

Hussein did nothing to discourage the allegations, worrying many in the international community.

Under such circumstances, the U.S. doubled down on its campaign to pressure Iraq to allow weapons inspectors into the country. As part of the effort, the Clinton administration signaled early on it was open to a preemptive strike against sites believed to be central to Hussein’s arsenal.

One of the strongest backers of a military response was Biden. In November 1998, the same day Hussein announced he would accept “positively any initiative” to end economic sanctions, Biden backed Clinton’s decision to deploy bombers to the Persian Gulf in preparation for a potential strike.

Biden “expressed support for the use of force, saying failure to do so ‘will only embolden Saddam to take an increasingly more aggressive posture on production of weapons … and threaten his neighbors again.’ Biden also urged a sustained effort to “dethrone him over the long haul,” the Washington Post reported at the time. 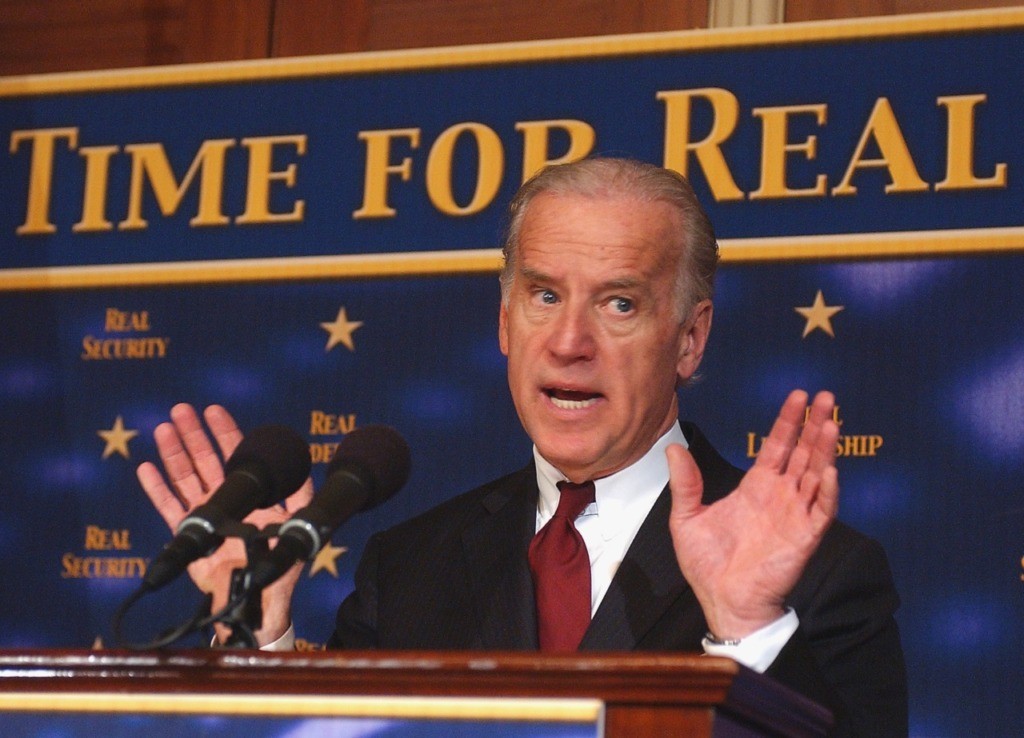 Senator Joseph Biden, D-Del., marks the third anniversary of the Iraq war with a news conference on Capitol Hill Monday, March 20, 2006. Biden told reporters, “We got rid of a brutal dictator. and that’s good. But we may be on the verge of trading him for chaos and a new terror haven in the Middle East.” (AP Photo/Dennis Cook)

The senator, who earlier that year admitted inspectors were unlikely to succeed as long as “Saddam is at the helm,” implored Clinton to take military action in the coming weeks. The president, who had already bombed Iraq twice before, seemed to need little push, especially as revelations of his affair with a former White House intern dominated the domestic political scene.

In December, six days after the Republican-controlled House voted to impeach Clinton because of that scandal, the president initiated an extensive military strike against Iraq. Spread over four days, U.S. forces, in conjunction with the government of Great Britain, launched 415 cruise missiles and dropped more than 600 bombs on 97 sites believed to be essential to Hussein’s production of weapons of mass destruction. Included on the list were 11 weapons factories, 18 security facilities, 9 military installations, six air fields, and one oil refinery, among others.

Biden, according to Clinton staffers, played a key role in convincing the president to launch the strikes, despite concerns from some the timing could appear brazenly political.

“On Tuesday night [Clinton’s] national security adviser … called Sen. Joseph Biden, among others, and asked whether the bombing would raise a storm of charges that [the president] had wrought a war of political self preservation,” the Post recounted. “Biden, according to one account, advised Clinton to put on his raincoat—and launch anyway.”

In fact, Biden would emerge as one of the president’s most vociferous defenders on the topic, arguing Hussein’s antagonism trumped any domestic issues.

At the time, Biden’s aggressive support for disarming Iraq underscored his transition from dove to hawk. Between his election to congress in 1972 and Clinton’s ascension in 1992, Biden was seen as tempered and cautious when it came to foreign policy. Not only did the senator advocate for arms control throughout his first two decades in office, but he was also often an unflinching critic of U.S. intervention abroad, from the Vietnam War to Grenada.

Biden’s views remained consistent throughout the early 1990s. The senator voted against the Gulf War, arguing it was unfair for America to bear the burden of the conflict, while economic sanctions were still an option in stymieing Hussein’s invasion of Kuwait. Biden stood resolute in that opinion even after U.S. forces successfully pushed Hussein’s army back into Iraq’s borders and declared a ceasefire within 100 hours of starting the ground campaign. 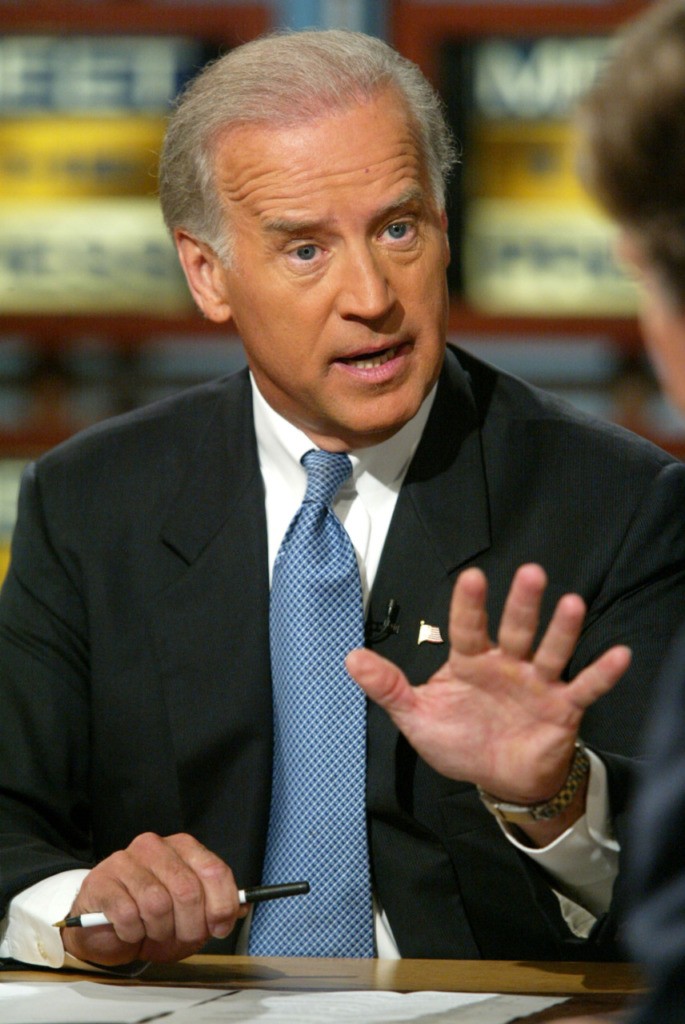 Senator Joseph Biden during taping of NBC’s ‘Meet the Press’ August 4, 2002. Biden talked of the Senate hearings on Iraq and possibility of a military attack. (Alex Wong/Getty Images)

“My concern from the outset was, and still remains, how do we accomplish our stated goal of achieving stability in the Middle East,” the senator told Delaware’s News Journal in March 1991, shortly after the hostilities ended.

“We now are faced with the dilemma of instability in Iraq as well as its reconstruction,” he added. “I still am of the view that sanctions would have made everything easier.”

Biden’s views, though, began to flip in the years following that conflict. Some speculate Biden’s ascension to the foreign relations committee and his experience, through that role, with the ethnic genocide that unfolded in the Balkans during the 1990s fed his transition.

Regardless, it was evident as early as 1993 that Biden was no longer a dove. That year, the senator heartily backed Clinton’s decision to bomb the Baghdad headquarters of Iraq’s intelligence service after its agents allegedly attempted to assassinate former President George H.W. Bush.

Similarly, the senator applauded Clinton’s decision to bomb Hussein’s forces after the strongman launched an offensive against Kurdish factions in northern Iraq in 1996.

By the time Hussein was refusing to cooperate with weapons inspectors, Biden appeared to have come to the conclusion the only option left was to “get rid of Saddam.”

“Many of us believe here, as long as Saddam is at the helm, there is no reasonable prospect … [any weapons] inspector is ever going to be able to guarantee that we have rooted out … the entirety of Saddam’s program relative to weapons of mass destruction,” Biden said at a foreign relations committee hearing in September 1998.

“All of us here really know, and it’s a thing we have to face, that the only way, the only way we’re going to get rid of Saddam Hussein … and it’s going to require guys … in uniform to be back on foot in the desert taking this son of a—taking Saddam down,” the senator said.

Biden, for his part, would remain steadfast in that view even after Clinton’s 1998 bombing campaign proved futile. Instead of forcing Hussein to accept U.N. weapons inspectors or even proving he did have weapons of mass destruction, the strikes only emboldened the Iraqi strongman into a position of no compromise.

No weapons inspector would enter the country until Hussein was ousted by U.S. forces in 2003 during the Iraq War—a conflict Biden strongly supported at its outset, despite recent claims to the contrary.