And so, for the first time in recorded history, healthy Americans dutifully fulfilled our end of the bargain and went into quarantine by dutifully agreeing to go into lockdown while our economy collapsed.

And now we know we were suckers…

Now we know the politicians lied to us.

My Democrat governor, Roy Cooper,  just canceled school for the rest of the year and extended our ludicrous, pointless, statewide, one-size-fits-all lockdown to May 8.

Among others, all of California, Michigan, Hawaii, and Wisconsin are locked down through the end of May. Oregon is locked down until July 6!

There is no threat the healthcare system’s going to crash in any of those states. You might be able to convince me there’s a small risk in some urban areas — in Detroit or Los Angeles or Milwaukee, but 95 percent of those states are completely out of the woods. But these Democrat governors refuse to open any part of their state.

My North Carolina county is completely out of the woods…

We had nine cases here and no deaths.

We’re still locked down, even though there’s a full-blown medical center in my county.

In my five county area we’ve had fewer than 100 cases and one death. Each of those counties has a hospital. There is no chance these health systems will crash. None. So why are we still locked down?

Even in our most densely populated area, Charlotte, there have been only 1651 cases and 49 deaths.

The curve here in North Carolina, and the curve in 95 percent of the country is not just bent, it’s crushed, decimated, destroyed — and let’s now take this opportunity to go ahead and say the following out loud: in much of the country there was  never any real danger of overwhelming the health care system.

The experts were wrong. 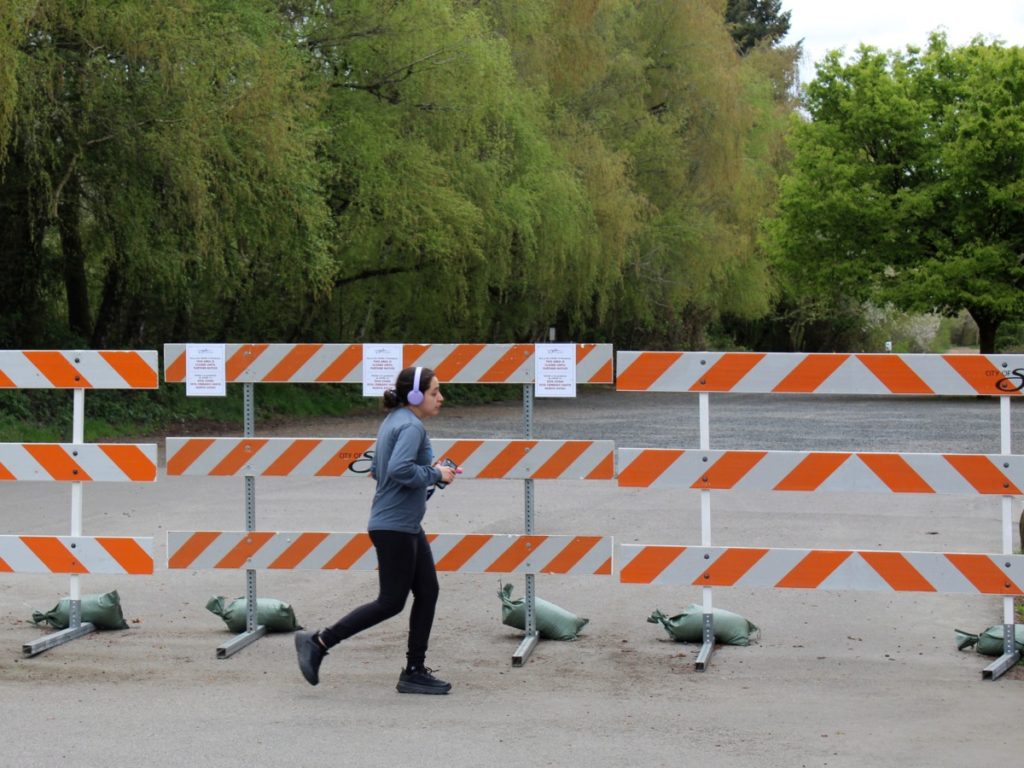 A woman jogs past a barricade outside a park in Salem, Ore. Oregon is in its fourth week of lockdown. Oregonians can’t enter state parks in mountains and in valleys now blooming with springtime flowers, or go to the state’s trademark wineries and microbreweries. But Oregon appears to be an outlier as coronavirus cases start to peak in each state. Of all the states in America, Oregon should have the fewest COVID-19 deaths per capita when the peak comes here, according to researchers at the University of Washington who developed a closely watched model. (AP Photo/Andrew Selsky)

We planned for the worst and the worst didn’t happen… That’s a good thing. But why in the name of God’s creation are lockdowns being extended where there is no risk of the system being overwhelmed?

You told us we had to ravage our economy in order to bend the curve. Okay, the curve is bent; can we go now? No, because now you’re moving the goalposts. Now you’re spreading an all new pile of bullshit with this bullshit about saving lives and it still not being safe to go out.

Well, riddle me this Govs. Newsom, Cooper, Whitmer, and Evers…

When there is zero risk the health care system will crash, and when there is no vaccine or cure, why is it safer to reopen in two or three weeks or a month or three months, as opposed to right now?

With no vaccine or cure, what’s going to change to make things safer between today and May 8 or May 31 or July 6?

Don’t tell me we’re waiting for warmer weather. First off, no one has said that’s why the lockdowns have been extended. Secondly, Dr. Fauci has already said “You must assume that the virus will continue to do its thing” when the weather gets warm — and I believe him.

Besides, we’re also being told the virus could roar back in the fall, which should only add to the urgency to free us today. Before we might have to hole up again, let us get back to normal for as long as possible, let us make as much money as possible.

Whether you reopen your state on May 1 or May 31 or July 6, this incurable disease will still be out there waiting… Which means it will be just as risky to reopen on May 31 as it is today — so why wait?

What is the benefit of waiting when waiting doesn’t make it any safer?

What had been a national effort to save lives, a noble effort of national unity, has been twisted by Democrat governors into something unnecessarily punitive that reeks of a partisan power play to destroy President Trump’s re-election chances. Give me a better explanation.  Because this is the bottom line…

Unless you’re willing to wait for a cure (that is at least a year away or might never come at all), when there is no risk the health care system’s going to crash, what is the point of waiting one more day to open up the country when waiting doesn’t make us any safer?

You lied to us.