President Donald Trump and first lady Melania met at the White House on Friday with several heroic Americans who continue to fight the battle against the coronavirus.

Amy Ford, a nurse from West Virginia, said goodbye to her children and traveled to a New York City hospital to care for coronavirus patients.

“Amy has been serving the coronavirus patients around the clock. She once held the hand of an elderly patient all night long, just so the woman would not feel alone,” Trump said. “Boy, that’s something. Thank you, Amy. That’s incredible.” 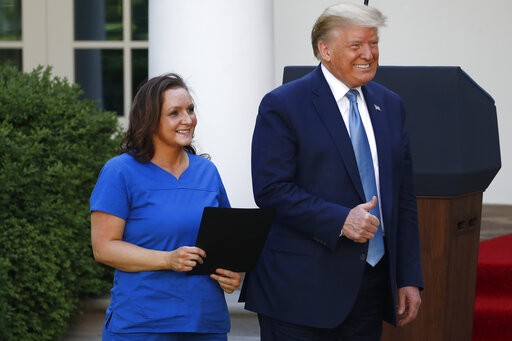 President Donald Trump poses for a photo with nurse Amy Ford during a presidential recognition ceremony in the Rose Garden of the White House, Friday, May 15, 2020, in Washington. (AP Photo/Alex Brandon)

Ford spoke about her grueling experience in the hospital and her efforts to care for patients unable to see their families and loved ones.

“This experience has been one of the most emotionally challenging things that I’ve ever been through, but it has made me a better person in the end,” she said.

Ford told the president that she never contracted the virus, despite long hours with patients. She also offered hope to Americans who feared the virus.

“There is a light at the tunnel,” she said. “We are beginning to see progress, and we’re starting to see stories of success. This virus may have initially caught our great nation off guard, but we will overcome this, and we will prevail.”

“After the experience with the virus, I felt compelled to help the residents of the housing development start patrolling in East Harlem, New York,” he said. “We are all in this fight together.”

Trump thanked him for his efforts in New York City.

The president also met with three ten-year-old Girl Scouts from a troop in Maryland who sent hundreds of boxes of Girl Scout cookies to local firefighters, doctors, and nurses, as well as sending about 200 cards to healthcare workers.

One of the girls thanked the president for inviting them to the White House, noting that they were just a few of the millions of children who were working in their community: 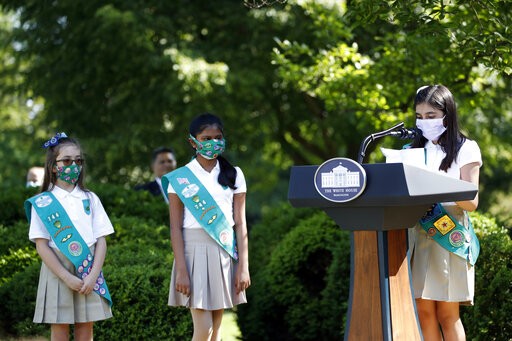 Laila Khan speaks as she stands on stage with fellow Girl Scout Troop 744 members Lauren Matney, left, and Sravya Annappareddy, center, during a presidential recognition ceremony in the Rose Garden of the White House, Friday, May 15, 2020, in Washington. (AP Photo/Alex Brandon)

“Our message is that everyone can do something, whether it is donating cookies, adjusting to distance learning, or just helping out our parents,” she said.

The president also greeted a local landlord from Arkansas who refused to accept rent checks from eleven of his small-business tenants, allowing them to stay in business. He met, too, with the cofounder of a bow tie company in West Virginia who shifted to producing free masks for medical facilities.