A cliche of our age is that Americans are forgetting their own past–if they ever knew it in the first place. We are all familiar with the words of the song, “Don’t know much about history.”  And that which we do know, we got from an Oliver Stone movie. Oh, and boil the history lesson down, please, to 280 characters.

But is this really true?  Has our national brain really degenerated into digital mush? The politically correct public schools and the trivia-obsessed popular culture may have done their best to eliminate honest and serious consideration of important issues of American history, but Americans are still interested in their past.  We want to know who we are and how we got here.

Andrew Breitbart believed that if the American people knew the truth, they would do the right thing.

So, let us reflect here on the Battle of Gettysburg: the great three-day battle in Pennsylvania, July 1-3, 1863, that cost nearly 9,000 Americans their lives and set the soon-to-be-reunited nation on a new course.

Lincoln himself, to be sure, provided the greatest testament to the battle in his Gettysburg Address, delivered on November 19, 1863:

We have come to dedicate a portion of that field, as a final resting place for those who here gave their lives that that nation might live. It is altogether fitting and proper that we should do this.   But in a larger sense, we cannot dedicate, we cannot consecrate, we can not hallow, this ground. The brave men, living and dead, who struggled here, have consecrated it, far above our poor power to add or detract.

Lincoln’s speech was a brilliant eulogy, and it was also marvelous poetry.  In addition, it was a powerful summing up of a new argument about politics–that out of the sacrifice at Gettysburg would come a “new birth of freedom.”

Lincoln’s argument is controversial, of course, to this day.  The Civil War itself is a settled matter, but the questions of Constitutionalism, federalism, and centralization vs. decentralization are as vivid as ever.  And those who would wish to take a side in the contemporary debates are better off if they understand their history.

Much of that vital history traces back to the War Between the States.  As Winston Churchill wrote, “The American Civil War…must be considered the noblest and least avoidable of all the great mass conflicts.”

Yet in his Gettysburg Address, Lincoln was wrong about one thing when he said, “The world will little note, nor long remember what we say here.” Of course the world remembers what Lincoln said. And yet Lincoln was right when he added that the world “can never forget what they did here.”  That is, the men who fought the Battle of Gettysburg.

Indeed, in the years afterward, Gettysburg became a source of pride, for both North and South.  The fiftieth anniversary of the battle, in 1913, became a major national celebration–and conciliation; all honorably discharged veterans, of both armies, were invited.

President Woodrow Wilson was there and spoke to the old vets, declaring:

We have found one another again as brothers and comrades in arms, enemies no longer, generous friends rather, our battles long past, the quarrel forgotten—except that we shall not forget the splendid valor.

The seventy-fifth anniversary of Gettysburg, in 1938, was also a national event.

President Franklin D. Roosevelt was there and spoke to the even older vets–fewer in number, but still full of pride and nostalgia.  He greeted the “veterans of the Blue and the Gray” and,  pointing to the totalitarian storm clouds around the world, added, “Here in our land we give thanks that, avoiding war, we seek our ends through the peaceful processes of popular government under the Constitution.” 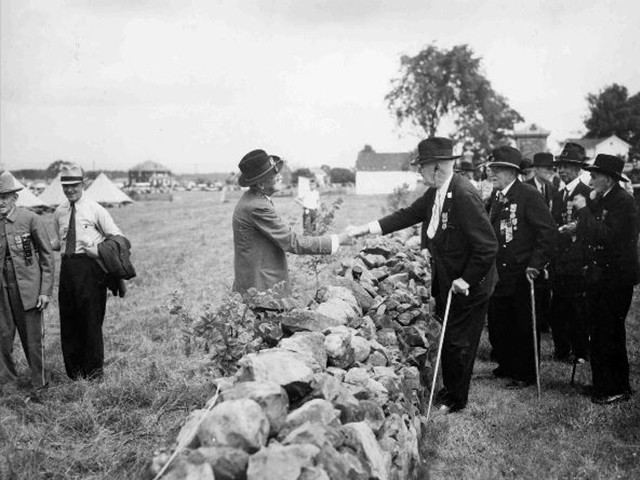 The hundred-year mark, the centennial, was a more subdued affair, because, of course, the actual veterans were gone by then.  President John F. Kennedy visited Gettysburg on March 30, 1963, and Vice President Lyndon Johnson spoke on that hallowed ground on Memorial Day, 1963.

Today, of course, Gettysburg is an American shrine of nearly 6,000 acres, graced by 1,328 monuments and some 3,500 patriot graves.  And roughly three million people every year–and so yes, people remember, and they want to know more.

Yet the task of historical memory is ongoing. We must remember. Because if we forget as a people, we are lost as a nation.

Oliver Wendell Holmes Jr.–born in 1841 and living until 1935–was one of those who resolved, throughout his long life, to help his fellow Americans remember the Civil War.

He enlisted in the Massachusetts infantry as a fresh private in 1861 and was mustered out as a battle-scarred captain in 1865.  Decades later, he was appointed by President Theodore Roosevelt as a Justice on the Supreme Court, where he served for 30 years.

On Memorial Day, 1884, Holmes began his remarks before an assembly of veterans by recalling the question that vexes us to this day–do people remember?  Holmes hoped to find an answer–an answer “in which we of the North and our brethren of the South could join in perfect accord.”

So what did the veterans of both sides have in common?  As Holmes explained, “The generation that carried on the war has been set apart by its experience. Through our great good fortune, in our youth our hearts were touched with fire.”

Those words, “touched with fire,” we might note, formed the title of an inspiring book about the creation of the Vietnam Veterans Memorial in the early 1980s.  So right there we see an encouraging link of continuity, connecting past and present.  It helps to know one’s history.

Returning to Holmes’ Memorial Day oration of 1884, we can see that this Civil War veteran sought to highlight the commonality of the combat experience:

It was given to us to learn at the outset that life is a profound and passionate thing.  While we are permitted to scorn nothing but indifference, and do not pretend to undervalue the worldly rewards of ambition, we have seen with our own eyes, beyond and above the gold fields, the snowy heights of honor, and it is for us to bear the report to those who come after us.

Those are powerful words: “to bear the report to those who come after us.”  That’s the special charge to war veterans, of course, to report on the battle, on the courage–and on what it means today.

It’s also a special charge to the rest of us, to learn about what happened, to put it in context, to apply the lessons to today.  If we do all that, as we must, then the sacrifice at Gettysburg, and on so many other battlefields, will never be in vain.