Rapper and actor Ice Cube has posted a cartoon on Twitter showing a black figure stomping on a white figure in what appears to be the rapper’s latest reaction to the death of George Floyd and the riots that have ensued.

His tweet comes just days after he tweeted a photo falsely identifying former Minneapolis police officer Derek Chauvin as a man wearing a “Make Whites Great Again” hat. Ice Cube has been one of the most vocal celebrities following the death of Floyd, making cryptic statements on social media suggesting violence to come.

The Straight Outta Compton rapper tweeted on Friday a comic showing a black figure stomping on a white figure who is holding him on a leash. “I got a new dance step for y’all to learn. It’s called ‘The Worldwide One Hood 2 Step,'” he wrote.

I got a new dance for y’all to learn. It’s called “The Worldwide One Hood 2 Step” pic.twitter.com/n3ERNexykc 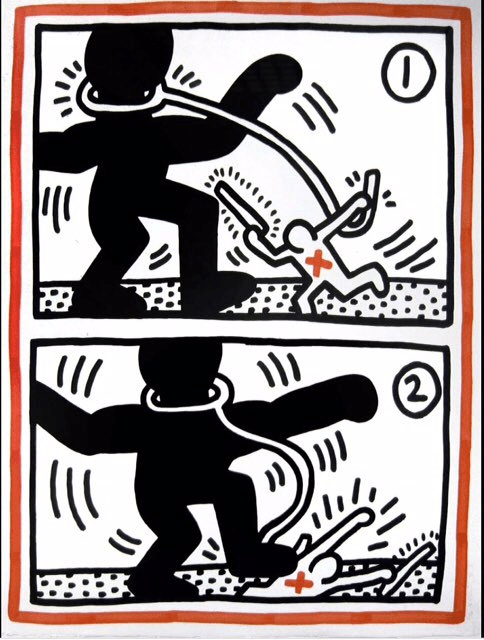 On Friday, the social media giant cited that very reason in blocking tweets from President Donald Trump and the White House addressing the riots in Minneapolis. The White House has disputed Twitter’s claim, saying that the tweets in question didn’t break any rules and amount to censorship.

Ice Cube appears to have appropriated a Keith Haring lithograph from 1985 titled Free South Africa. The Haring artwork was intended to comment on the apartheid system in South Africa and how blacks were rising up against institutionalized white oppression.

The false tweet is still active and visible even though Twitter slapped a “manipulated media” fact check on the photo.

The F.B.I. knows exactly who the racist are in each police department and still let them keep there jobs until something like this happens. Stop sitting on critical information. Weed them out and get them out…NOW! #jonnycomelatelyagain https://t.co/X7ny0wsRQX

The Friday actor has been posting ominous messages on Twitter hinting that violence is coming. “Remember this: It ain’t no fun when the rabbit got the gun,” he tweeted Friday.

Remember this: It ain’t no fun when the rabbit got the gun.

“How long will we go for Blue on Black Crime before we strike back???” he tweeted earlier this week.

How long will we go for Blue on Black Crime before we strike back??? https://t.co/sXDq7SXl6W

Another tweet showed Ice Cube holding what appears to be an ax.