CLARKSVILLE, Tennessee — Sen. Tom Cotton (R-AR) and GOP U.S. Senate frontrunner, former U.S. ambassador to Japan Bill Hagerty, laid out a detailed vision to hold China accountable for the coronavirus pandemic and stop the Chinese Communist Party from continuing to build global influence all while bringing manufacturing especially of critical goods back to the United States.

In an exclusive interview with Breitbart News after a series of campaign events in the Nashville area and here in the home of Fort Campbell and the 101st Airborne Division, of which Cotton was a part when he served in the Army, Cotton and Hagerty ripped into Communist China. Cotton was campaigning with Hagerty for his contested GOP U.S. Senate primary and laying out the case of why President Donald Trump asked Hagerty to run for this seat and endorsed him for it a year ago—an endorsement the president firmly stands behind. The joint interview aired on Breitbart News Saturday on SiriusXM 125 the Patriot Channel. In it, Cotton and Hagerty both demonstrate their expertise when it comes to China and focus on their efforts to bring manufacturing back to the United States. 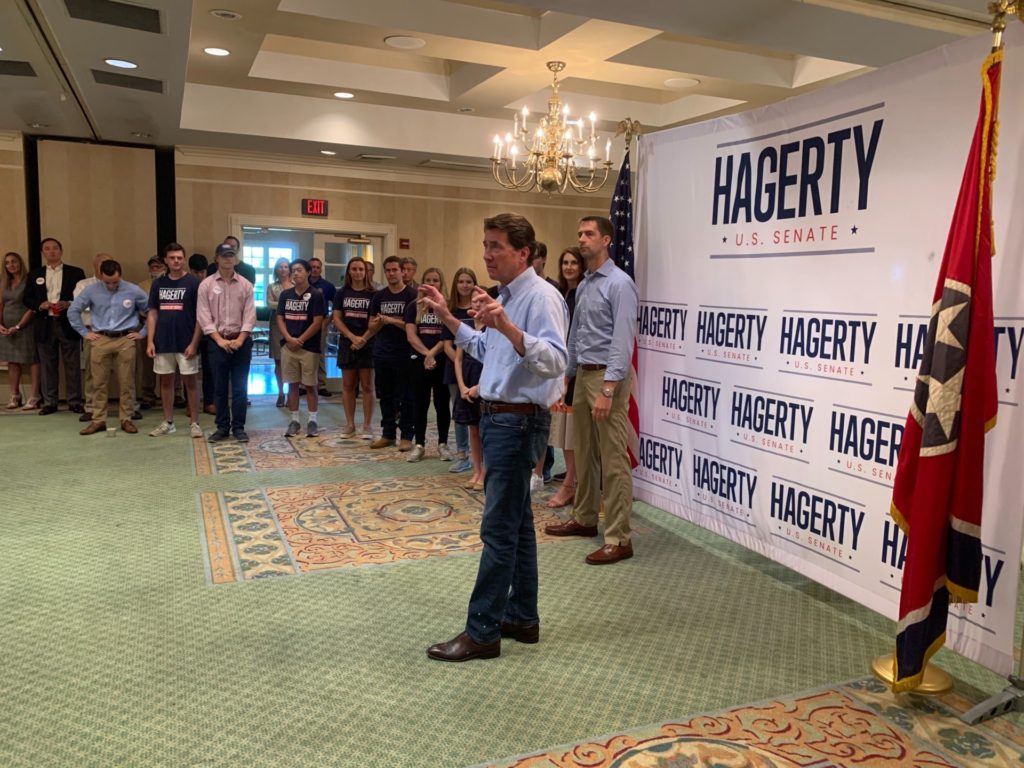 “I’m here in Tennessee today supporting Bill Hagerty for the same reason President Trump is supporting Bill Hagerty—because Bill will be a strong, reliable conservative voice in the United States Senate,” Cotton told Breitbart News. “He will stand up for American jobs and American workers. He’s already stood up to China in so many ways as our ambassador to Japan, and when it wasn’t popular in some Republican circles in 2016 Bill Hagerty supported Donald Trump. He worked hard to get Donald Trump elected, to beat Hillary Clinton. He walks the walk, he doesn’t just talk the talk. He will be a great United States Senator and that’s why I endorsed him and that’s why Donald Trump has endorsed Bill Hagerty.”

Hagerty, Trump’s former ambassador to Japan, spent the early days of the Trump administration on the front lines of the trade war with China—a prelude to the broader battle that looms ahead in the wake of the coronavirus pandemic. Hagerty told Breitbart News that a big part of why President Trump asked him to come back from Japan and run for this seat being vacated by retiring Sen. Lamar Alexander (R-TN)—and then endorsed him early and often for it—is because the president trusts Hagerty when it comes to the core issue of dealing with the Chinese Communist Party.

“It’s important—that’s the reason I came back,” Hagerty said. “Our nation is at a crossroads right now. If you just turn on the TV, you see bedlam, looting, chaos. Our social system is under attack. If the Democrats have their way, the American dream will be lost forever. I am very concerned about it. President Trump is too. That’s a key reason why he endorsed me to come back and run for the United States Senate. He needs an ally who will stand strong against these socialist Democrats in Washington. He also needs someone who understands how to deal with China, just as Sen. Cotton said. I had that experience because Japan is the location of more U.S. forces than anyplace else in the world besides the United States. I was there, busy staring China in the eye militarily, diplomatically, and economically, because Japan is the cornerstone of dealing with all of Asia, and China is our greatest threat there. Make no mistake, China is not our friend.”

When asked how he intends to hold China accountable for the pandemic, Cotton said he and his colleagues like Sen. Marsha Blackburn (R-TN)—who has also now endorsed Hagerty and appeared alongside him at earlier events on Friday—have introduced legislation to force the Chinese Communist Party to literally pay for the cost of the pandemic. This is legislation and an effort Hagerty is expected to support, assuming he is elected to the U.S. Senate in November.

“I’ll start by saying that we should literally make China pay for the horror that they have inflicted on millions of Americans,” Cotton said. “That’s why I’ve proposed legislation with Sen. Blackburn and other senators to allow Americans harmed by the Wuhan coronavirus to sue Chinese officials in federal court. They should literally have to pay for the harm they have inflicted upon our citizens and their families and at our workplaces and colleges. Now, there are other ways to make China pay, as well, in terms of bringing our jobs and factories back to the United States. I’ll let Bill address that, because it’s the centerpiece of his campaign.”

Hagerty said that this is why President Trump has named him to the White House’s economic recovery task force to begin moving on efforts to bring jobs back to America. He is overseeing and guiding efforts right now for the White House, in addition to his U.S. Senate campaign, to help the president bring manufacturing of critical things like medicines, medical devices, technology, and more, back to the United States from China.

“It’s one of the key reasons President Trump has already brought me back to work on this issue. He made me a member of the White House Economic Recovery Task Force,” Hagerty said. “One of the key things I’m focusing on is getting our supply chains back from China. America can no longer be dependent on China for key things like antibiotics, medical devices, certainly not for high technology. I know how to hit China where it hurts. I’m going to work hard to make ‘Made In the USA’ the theme of America again. We’re working on the policies right now to do it. The failed policies of the past—and I’m talking about both Democrat and Republican administrations—failed policies of the past have led us to this point where we’ve even had a dependency on China. This is a nation that doesn’t have our best interests at heart. To reduce our dependency on China, to eliminate our dependency on China, and to call it what it is: China is an aggressor. China is a predator and they have to be stood up to.”

Hagerty added that Trump, in his first few years as president, turned the country around when it came to China and laid the groundwork for what lies ahead. He added that corporate America has begun waking up to the fact that it is far more costly to get into bed with the Chinese Communist Party than it is beneficial, and American business leaders are starting to change their behavior—a trend that began with President Trump’s election.

“The great news is it’s already begun. It’s thanks to the leadership of President Trump, and senators like Sen. Marsha Blackburn and Sen. Tom Cotton, that it has already begun,” Hagerty said. “Go back to 2017—the first step was the administration undertook a major effort to review the regulations in America and to reduce a lot of the underbrush there and to make the streamlining of regulations a top priority. That made a better business climate here in America. The second thing they did, and I give a lot of credit to Sen. Tom Cotton, is they passed the tax reform in 2017. America’s corporate tax rate was the least competitive in the world, meaning the highest in the world, at 35 percent. We’ve reduced it now to 21 percent. That makes it more competitive. There’s more I think we can do. I’d like to take a look at the corporate tax rate again and see if we can reduce it further and also make it permanent. I’d also like to look at capital gains, because I want to make certain America is the most attractive place in the world to invest capital, whether it’s a capital gains tax holiday or there are other ways to increase the incentive to invest. For example, increasing the depreciation schedules or making other investments more readily expensed—anything we can do to unleash more capital in America and get it invested here is going to push us in the right direction. When President Trump stood up to China the first time by imposing tariffs, I think corporate America woke up. There is far more risk to doing business with China than they have thought. I’ve seen it for years. Here’s what happens when you do business with China: They steal your intellectual property, they force you to transfer your technology to them if you want access to their market, and they will use heavily subsidized industry to compete against us unfairly. That’s got to come to an end. And I think we’re going to work hard together to make sure that it does.”

Cotton noted that politicians and presidents of both parties—Republican and Democrat—for the past 30 years have failed when it comes to China. That’s why Cotton is enthusiastically supporting President Trump’s re-election bid and Hagerty’s bid for the U.S. Senate in Tennessee: to keep the boot down on China’s throat and move the ball further down the field.

“What Bill has described is the results of 30 years of failed China policies of both parties,” Cotton said. “China didn’t just magically become the world’s most dominant manufacturer of things like basic pharmaceuticals, medical protective equipment, or so many other manufactured goods. They became that in no small part because the U.S. government, through bad trade actions, through letting China discriminate against our products, encouraged companies to send our jobs and our factories to a country that is led by a Communist dictatorship and that essentially has no line between the private sector and government. That’s not competing on a level playing field. That’s not the free enterprise system. So it’s vital that we not only bring certain products back to the United States for manufacturing like drugs, like medical equipment, like high technology products, but that we also don’t allow China to continue to cheat us and our partners all around the world. Bill is describing exact policies about how to do that.”

Hagerty noted, too, that China’s use of its state power to back technology companies like Huawei is starting to face resistance around the world—something that is no small part thanks to the work he and others in the Trump administration did to turn the tide around the world against the Chinese Communist Party.

“One thing we have discussed before is the company Huawei,” Hagerty said. “If you look at the development of 5G infrastructure around the world, China has deeply subsidized a number of companies there to go out and unfairly compete. A couple years ago the only company talking about an end-to-end solution was Huawei, a Chinese company. Look, this is no small company. This is a 200,000-person-strong company with the balance sheet of Communist China behind it. They compete on an unfair playing field, just as Sen. Cotton has said. What America has done is stepped up. We’ve realized what a threat it would be if we allowed China to build out our 5G infrastructure. Not only is it telecommunications. We’re going to plug our energy grid into it. If we go to autonomous vehicles, how are they going to communicate? We cannot allow China to have a backdoor into America, so we have blocked their way into America. We’ve worked hard to get their way blocked into Japan. Australia has come on board. New Zealand has come on board, I think the U.K. is going to do it too. We’ve got to get our allies on board and stand up against this strong.”

More from Cotton’s and Hagerty’s joint interview with Breitbart News is forthcoming.