The White House on Tuesday will announce a $35 million grant to help fund housing grants for victims of human trafficking.

The grants will be delivered by the Office for Victims of Crime, a component of the Department of Justice’s Office of Justice Programs. They will go to 73 different organizations across the country that offer housing assistance, transitional housing, and housing cost assistance.

“Shelter is the number one most requested service for all crisis cases on the national human trafficking hotline,” a senior administration official told reporters in a briefing including Breitbart News.

One official spoke to reporters about how Covid-19 lockdowns made it more difficult for victims to escape their traffickers and find shelter.

“We are hearing that many victims were living in quarantine with their traffickers,” the official said. “The anecdotal stories that we are hearing are horrific.” 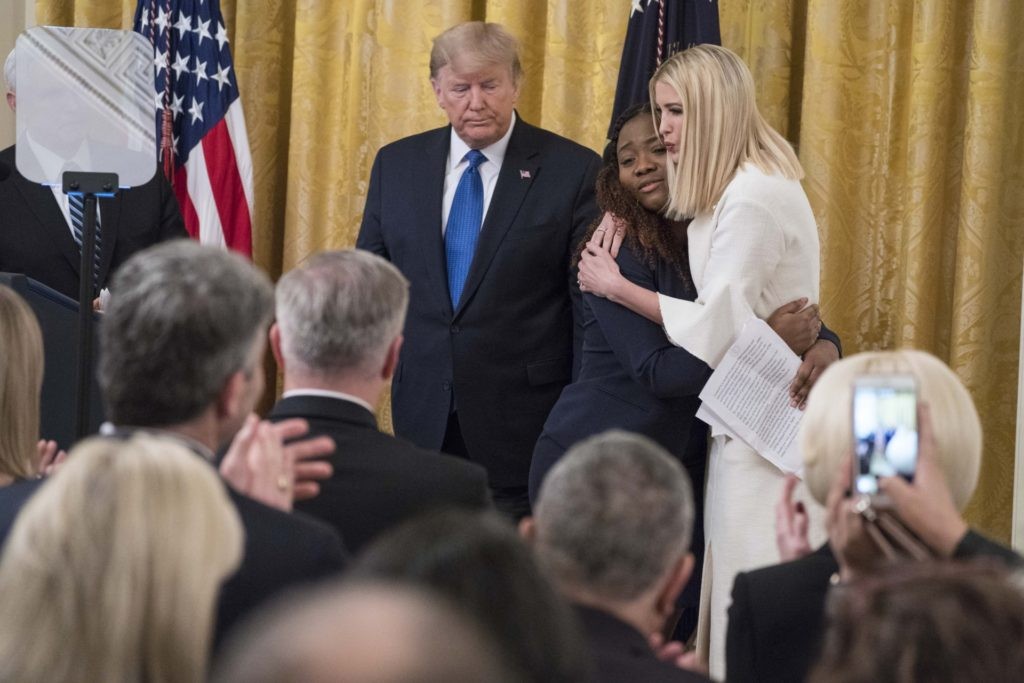 Ivanka Trump hugs Bella Hounakey, a survivor of human trafficking, alongside President Donald Trump during the “White House Summit on Human Trafficking: The 20th Anniversary of the Trafficking Victims Protection Act of 2000” event in the East Room of the White House on January 31, 2020 in Washington, DC. Trump plans on adding a new position at the White House to focus on the issue of human trafficking and online child exploitation. (Sarah Silbiger/Getty Images)

Over 70 percent of victims of human trafficking who contacted the national trafficking hotline were born in the United States, the official noted.

“This is just another example of how the president is going to be empowering victims, empowering survivors, empowering these organizations that are providing this safe and stable environment,” an official said.

President Donald Trump and his daughter Ivanka Trump have made defeating human trafficking a key issue in the Trump administration.

“In the midst of the COVID-19 pandemic, combating human trafficking in the U.S. and abroad is critical work,” Ivanka Trump said in a statement. “DOJ’s grant recipients are on the frontlines of this fight, ensuring that survivors across our country are afforded safe and stable housing and empowered with the support and resources they need to rebuild their lives.”

In January, the president signed an executive order to outline special resources to combat trafficking, including the appointment of a special adviser in the White House devoted to the issue.

“We will not rest until we’ve stopped every last human trafficker and liberated every last survivor,” Trump said at a January event highlighting the issue.