On the 19th anniversary of the September 11 terrorists attacks, Sergeant Major Thomas Payne will receive the Medal of Honor for conspicuous gallantry.

In an interview with the Army Times,  the career Army Ranger and Delta Force operative confirmed he will receive the award for gallantry on Friday at the White House. Sgt. Maj. Payne pointed to September 11, 2001 as the day he decided to enlist.

“I was a senior in high school. I was in class and we turned on the TV after the first plane hit. … That was the defining moment,” Payne recalled. “Once the towers fell on 9/11, that’s when I decided I was going to join the military and I was going to serve with the 75th Ranger Regiment.”

An instructor at the Army Special Operations Command at Fort Bragg, North Carolina, Payne has seen a lot.

As a sergeant first class and assistant team leader in 2015, Payne helped to lead his brothers in arms in the 1st Special Forces Operational Detachment-Delta during the 2015 hostage rescue mission, as the White House confirmed. 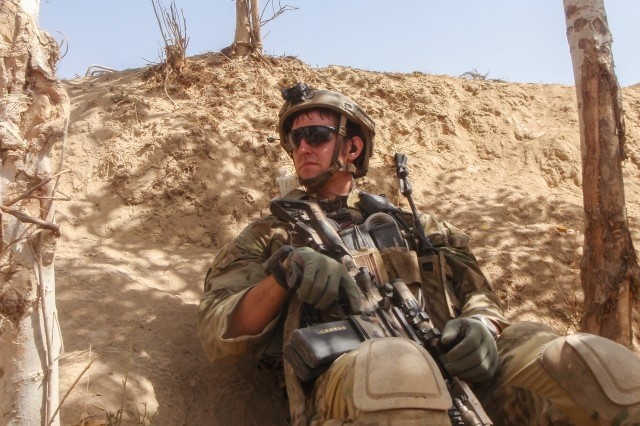 Sgt. Maj. Thomas “Patrick” Payne on a security patrol while in northern Afghanistan in 2014.

“Ramp drops; we run out of the back of the Chinook helicopter,” Payne said. “It’s a complete brown-out. We are in a pretty intense firefight right off the bat.” Within minutes, there was a casualty. After his group’s medic left to tend to Master Sgt. Joshua L. Wheeler, Payne could see that their Kurdish partners were reluctant to move forward.

“Our partners needed some strong inspiration,” Payne said, but one of his men stepped forward to lead the charge. “Follow me,” he said. “When you’re able to control your fear, that’s the greatest personal courage,” Payne added. “Personal courage is contagious on the battlefield.”

Amid suicide vest explosions and a growing fire, Payne charged into a building full of hostages with a pair of bolt cutters to sever the locks and free hostages. “I was able to cut the first lock. I bumped out. I had to catch my breath. The buildings on fire [and] we’re getting shot at,” Payne said.

Somehow, things were about to get even more desperate.

“The smoke deck is starting to drop at this point. I maneuvered [back] in and was able to cut the lock off, [and] kick the door open,” Payne explained. “As soon as I made entry into that house and secured a foothold, we received a call that the building was starting to collapse.”

Under a hail of gunfire, through haze of smoke and flame, Payne rushed in and out to escort the hostages. After retrieval, he and his team stood on the ride home so that their charges could rest.

Despite the clear heroism of this story, Payne speaks humbly of becoming the first living Delta Force member to receive the Medal of Honor.  “I look forward to serving as a guardian of this medal,” Payne said. “I just want to be a man who wears it well.”

THE MEDAL OF HONOR:

The Medal of Honor is awarded to members of the Armed Forces who distinguish themselves conspicuously by gallantry and intrepidity at the risk of their own lives above and beyond the call of duty while:

The meritorious conduct must involve great personal bravery or self-sacrifice so conspicuous as to clearly distinguish the individual above his or her comrades and must have involved risk of life.

There must be incontestable proof of the performance of the meritorious conduct, and each recommendation for the award must be considered on the standard of extraordinary merit.

Editor’s Note: This article incorrectly identified Payne as a “Navy veteran” at the time of publication. Payne is a career Army Ranger and Delta Force operative. The story has been updated to correct this error.