Democrats lead Republicans in several battleground states with returns from mail-in and early voting, but the Trump campaign believes former Vice President Joe Biden’s campaign is failing to run up the score.

Republicans beat Democrats in the first day of early voting in Florida, but Democrats soon expanded their margin. As of October 21, Florida reported 3,009,113 mail-in ballots and early voting ballots completed. Registered Democrats lead with 48 percent of the votes while Republicans have 32 percent according to data compiled by NBC News.

But the Trump campaign expected much higher numbers for Democrats in Florida, according to their data and public polling, as the majority of their party indicated a preference for mail-in voting.

Barr: Mail-in Ballots ‘Absolutely Opens the Floodgates to Fraud‘ https://t.co/vd4AD3EPb0 via @BreitbartNews. This will be the Election disaster of our time. Mail-In Ballots will lead to a RIGGED ELECTION!

A Washington Post poll of Florida conducted in September reported 63 percent of Democrats preferred to vote early or by mail while only 35 percent of Republicans felt the same. If that polling is accurate, Democrats should deliver nearly twice the early voting numbers as the Trump campaign.

Compare the polling with the actual results and Republicans are closer to their margin than Democrats, who face more pressure to run up the score.

“The problem for the Democrats is they are not hitting the number of requests that they need to reach an eventual vote goal,” a campaign source familiar with the data told Breitbart News.

Republicans across the country overwhelmingly prefer to vote in-person on Election Day, giving the Trump campaign confidence they can erase any early leads set by Biden’s campaign.

In Michigan, 67 percent of Democrats said they planned vote by mail or absentee ballot while only 32 percent of Republicans said the same, according to a Baldwin Wallace University Great Lakes Poll released on October 9.

Based on the polling, Democrats should be easily outperforming Republicans in Michigan by a margin of 35 percent. 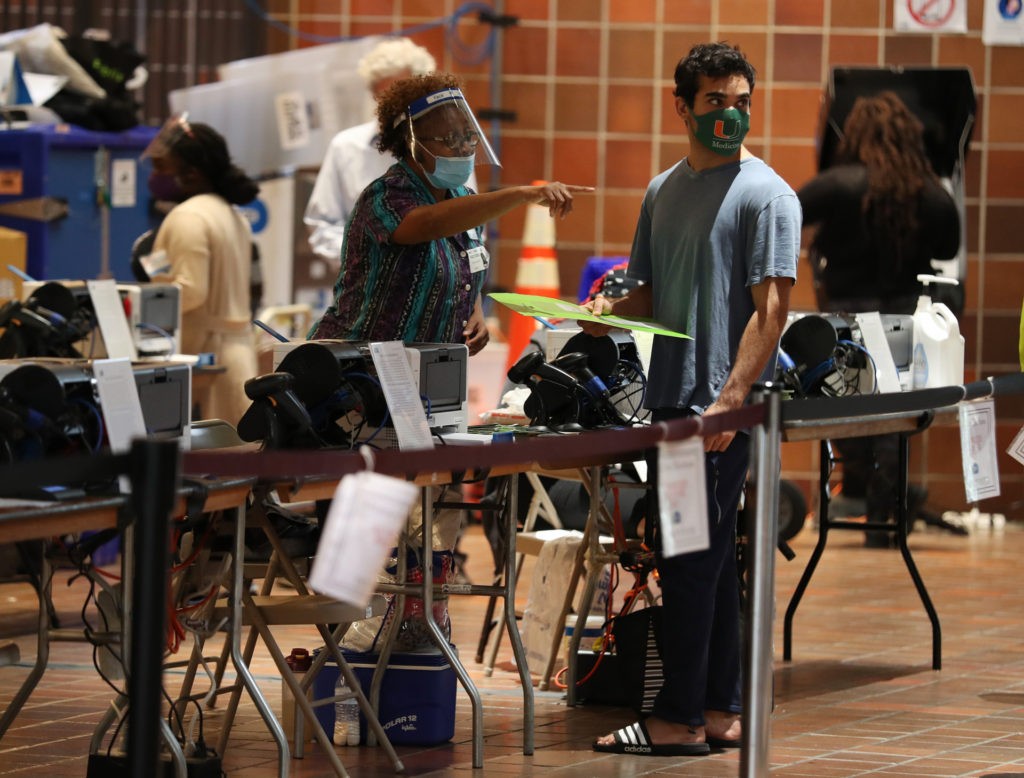 Poll workers help a voter as he prepares to cast his ballot at the Stephen P. Clark Government Center polling station on October 21, 2020 in Miami, Florida. The state of Florida saw a record-breaking first day of early voting with over 3.1 million votes cast. The early voting ends on Nov. 1. Voters are casting their ballots for presidential candidates President Donald Trump and Democratic presidential nominee Joe Biden. (Joe Raedle/Getty Images)

But Republicans are running even. Of the 1,695,900 mail-in ballots and early voting completed, both Democrats and Republicans have a 40 percent share of the vote.

Pennsylvania presents a challenge to both parties, as the commonwealth has never conducted a large vote by mail election.

Forty-seven percent of Democrats polled in Pennsylvania said they preferred voting by mail while only 17 percent of Republicans felt the same way, according to the Baldwin Wallace University poll.

A U.S. Postal Service employee is out of a job amid an investigation into over 100 absentee ballots discarded in a dumpster in Louisville. https://t.co/sIuYFoD2q7

With just over a million mail-in and early in-person ballots returned, Democrats are leading with 73 percent of the vote, while Republicans have 19 percent.

With mail-in voting being so unpopular with Republicans in Pennsylvania — only 17 percent said they planned to vote by mail in the Baldwin poll — the Trump campaign is meeting the minimal demand from their party even at 19 percent.

Millions of voters will attempt to vote-by-mail for the first time in Pennsylvania in 2020. Democrats face enormous pressure to get voters to submit their requested ballots.

“You have millions of voters trying to vote by mail for the first time, and that requires a comprehensive field program, to properly get that person to send their ballot back in,” a Trump campaign source said to Breitbart News.

Pennsylvania voters requested 2,798,174 mail-in ballots, 64 percent of them from Democrats. Now the Biden campaign has to work to get those ballots filled out properly and submitted.

A source in the Trump campaign said that typically, 15-20 percent of requested mail-in ballots never get submitted, without enormous social and organizational pressure from a campaign field operation.

Republicans, on the other hand, remain confident that their energized supporters will turn out as a big “red wave” on Election Day.