The New York Post endorsed President Donald Trump both in an editorial and on the front cover of its print newspaper on Monday. 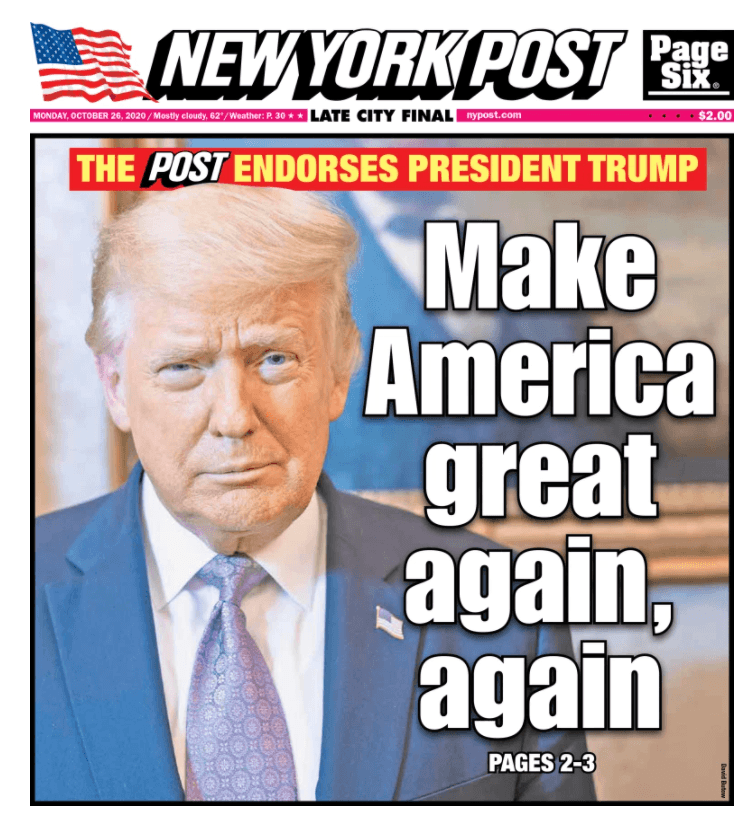 We can return to the explosive job creation, rising wages, and general prosperity we had before the pandemic. We can have economic freedom and opportunity and resist cancel culture and censorship. We can put annus horribilis, 2020, behind us and make America great again, again. We can do all this — if we make the right choice on Nov. 3.

The editorial praises Trump’s record of economic success, a change in foreign policy and free trade, and tougher immigration and law enforcement.

“He’s defended pride in American values against those who slander our entire nation as a racist enterprise,” it continues.

The editorial also defends Trump’s handling of the coronavirus but warns that former Vice President Joe Biden has no real solutions.

“Joe Biden has tried to make this election about the coronavirus, but it’s unclear he’d do anything different except trigger new lockdowns — a strategy the WHO now discourages,” according to the editorial.

The editorial criticized the president’s behavior on social media, such as Twitter.

“We can only counsel that a president who lowers the temperature rather than pouring gasoline on every fire will have a happier nation (and a higher approval rating),” the editorial reads.

But ultimately, the editorial endorsed Trump’s ability to get things done.

“The question is what matters more: words or actions? The media are enormously fixated on Trump’s tweets and extemporaneous remarks, never learning the lesson that most of the time, he is just riffing,” the editorial states. “In endorsing him, we’re choosing to focus on President Trump’s actions and accomplishments. He has kept his promises.”