Stacey Abrams, the leading Democratic powerbroker in Georgia, published an opinion piece in the Washington Post last week entitled, “Our democracy faced a near-death experience. Here’s how to revive it.”

In the piece, Abrams trashed Donald Trump, of course, and then laid out a list of bills she wanted to see enacted by Congress and signed into law by President Joe Biden, including the “For the People Act,” the “John Lewis Voting Rights Advancement Act,” and the “Protect our Democracy Act.”

But wait! There’s more! She also wants statehood for the District of Columbia and “binding self-determination” for Puerto Rico.

We might recall that Abrams was her party’s nominee for governor of the Peach State in 2018; yet even after she lost the election, she refused to concede. At the time, that non-concession made her a figure of fun among Republicans, and yet nowadays she’s having the last laugh.

Indeed, just on February 12, The New York Times headlined an admiring opinion piece, “Stacey Abrams knows how to turn a red state blue.”  Hundreds of similar headers have been flying across the MSM and the liberal blogosphere in recent weeks; the result, of course, is that Abrams has become a deity for Democrats.  So whatever Abrams does next—most likely, run for governor again in 2022—she will have the big blessing, and the bigger money, from Blue America.

So what did Abrams do in the last three years to recover and gain all this clout?  She worked hard, that’s what. She made a three-part calculation:

These points may seem obvious, even trite, and yet if we step back, we can see that much of contemporary campaigning consists of activities that do not necessarily coincide with getting more votes. Such as? Such as spending money on TV ads or posting on social media. These activities are undeniably a part of campaigning, but they aren’t obviously connected to getting votes and winning elections.

It’s perfectly possible for someone to see an ad on TV or a tweet on Twitter and yet not make a firm decision to vote. We might further consider: Someone watching Sean Hannity on Fox every night will get good ’n’ riled up against liberals, socialists, Deep Statists, etc., but no matter how angry, he or she can only vote once.

By contrast, if each Hannity fan devoted time to persuading others to vote, that would be more helpful to the conservative cause. For some, Hannity is great entertainment, and yet he’s no kind of turnout machine.

In the meantime, that’s exactly what Abrams has created: a turnout machine.

We might consider: In November 2016, Georgia had 6.6 million registered voters, and in November 2020, it had 7.6 million–and probably most of those new registrants were due to Abrams’ efforts. We can add that those extra million voters spelled the difference between Trump’s winning Georgia in 2o16 by more than 200,000 votes and his losing it in 2020 by 12,000 votes. 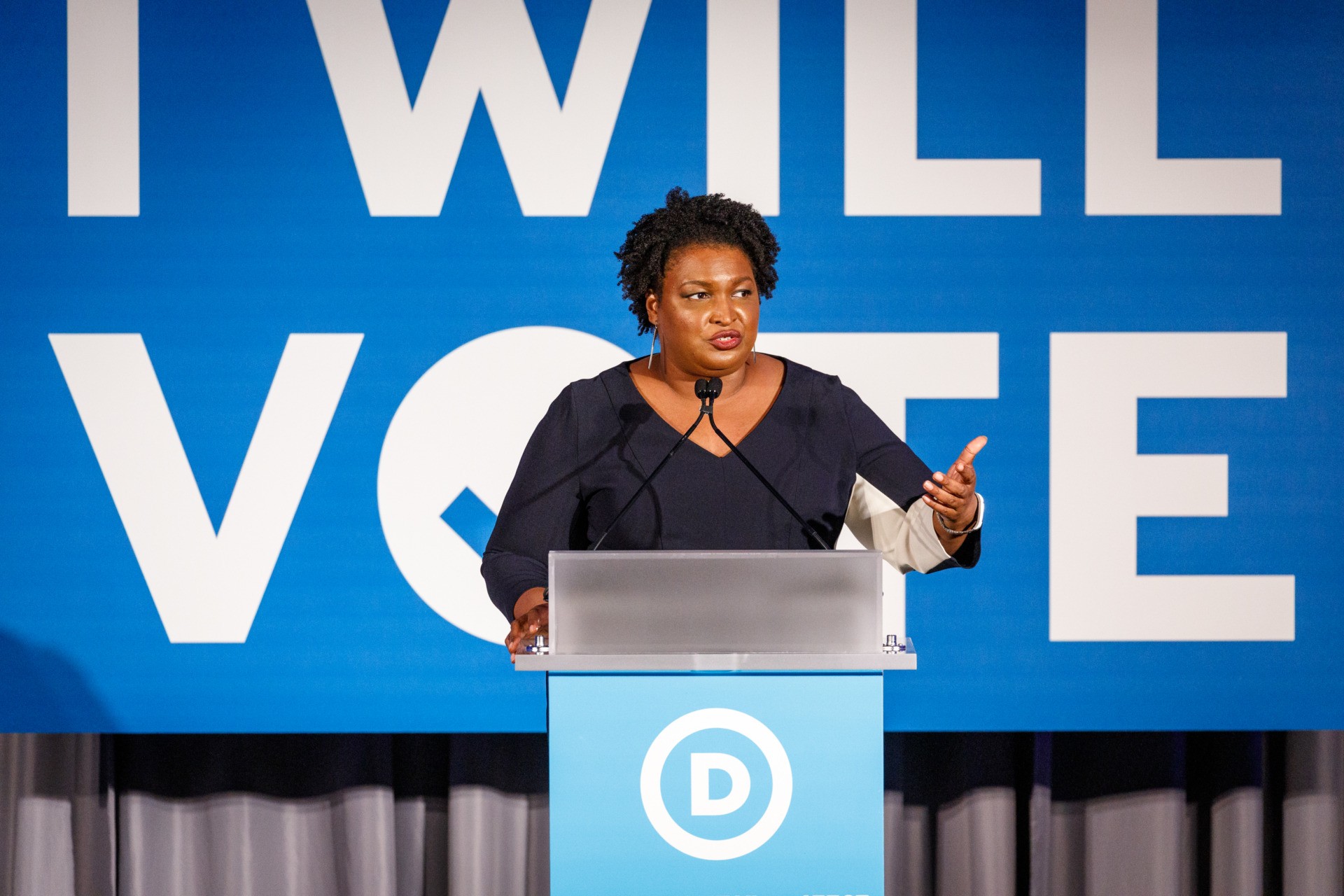 Former minority leader of the Georgia House of Representatives Stacey Abrams speaks to a crowd at a Democratic National Committee event on June 6, 2019, in Atlanta, Georgia. The DNC held a gala to raise money for the DNCs IWillVote program, which is aimed at registering voters. (Dustin Chambers/Getty Images)

Moreover, Abrams wasn’t done yet; there were still those two senatorial runoff elections. On January 2 here at Breitbart News, this author looked ahead and saw doom in those contests, noting that Democrats were mobilizing their voters, while Republicans were fecklessly feuding among themselves. When the election was still three days in the future, he wrote:

We can already see this much: The Democrats have invested a lot of time, money, and computer-smarts into shaping the political battlefield—and it has paid off.  Republicans will have to catch up.  Or else.

And the “or else,” of course, was that the GOP would lose both senate seats. Which it did.

So now we can see the simple genius of Abrams’ strategy: It’s all about the numbers. All those pieces of legislation that she touted in the Washington Post are aimed at the same end: getting more people—specifically, more Democrats—to vote. More Democrats, that is, including in the U.S. Senate, as would happen if D.C. became the 51st state.

Democratic operatives have figured out that the path to victory is registration, motivation, and, if need be, transportation—all focused on the specific act of voting. Seen in this light, the hoopla of campaigning—TV, tweets, debates, rallies, parades, etc.—is beside the point. What matters is casting ballots.

By contrast, the GOP seems to have absorbed the opposite lesson: that voting is less important than fighting. And fighters lose, as we just saw.

Republicans Shot Themselves in the Peach

An astonishingly depressing article in the February 2 edition of the Atlanta Journal-Constitution was headlined, “Turnout dip among Georgia Republicans flipped U.S. Senate.”

As the piece noted, more than three-quarters-of-a-million Georgians who voted in November failed to vote in the January senatorial runoff.  So who were those missing voters?  Let the newspaper tell you:

The AJC’s analysis found that the drop in turnout was most severe in northwest and South Georgia, areas where Trump held rallies, in Dalton and Valdosta.

The article includes a map that shows that yes, indeed, the falloff was sharpest in the places where Trump held rallies. The paper continued:

Meanwhile, 228,000 new voters cast ballots in the runoffs who hadn’t voted in the Nov. 3 election.  They were more racially diverse and younger voters who tend to back Democrats.

In those divergent numbers—Republican turnout down, Democratic turnout up—we see the story of how the GOP was defeated: David Perdue lost by 55,000 votes, and Kelly Loeffler lost by 94,000.  To emphasize: Loeffler and Perdue received roughly 200,000 fewer votes in January than they got in November. And yes, such fringe figures as Lin Wood played a central role in this decline; for sure, Republicans should not take voting cues from that Democratic voter and donor.

In the wake of this trifecta of fiasco—Trump, Loeffler, and Perdue losing in what was once a safely red state—the GOP must rethink.  In particular, it must rethink its approach to political campaigning.

What Is to Be Done?

Once again, Abrams’ approach can be stated simply: Get your people registered, and then get them to vote. These days, of course, most voting is either early or by mail.

Indeed, according to a post-election report by the Pew Center, a full 46 percent of Americans voted by mail last year, while 27 percent voted in-person early. In other words, barely more than a quarter of Americans voted in the traditional manner by showing up at the polls on Election Day, which was the focus of Republican GOTV (get out the vote) efforts.

Nor is there any going back, even when Covid-19 goes away. Millions of Americans have made working and socializing virtually a permanent part of their lives, and they won’t tolerate losing the option of voting remotely.

So Republicans are going to have to figure out how to flourish in this new political environment—or they won’t flourish at all. Indeed, if Republicans choose to dig their own political grave, Democrats stand ready to shovel the dirt on top of their coffin. 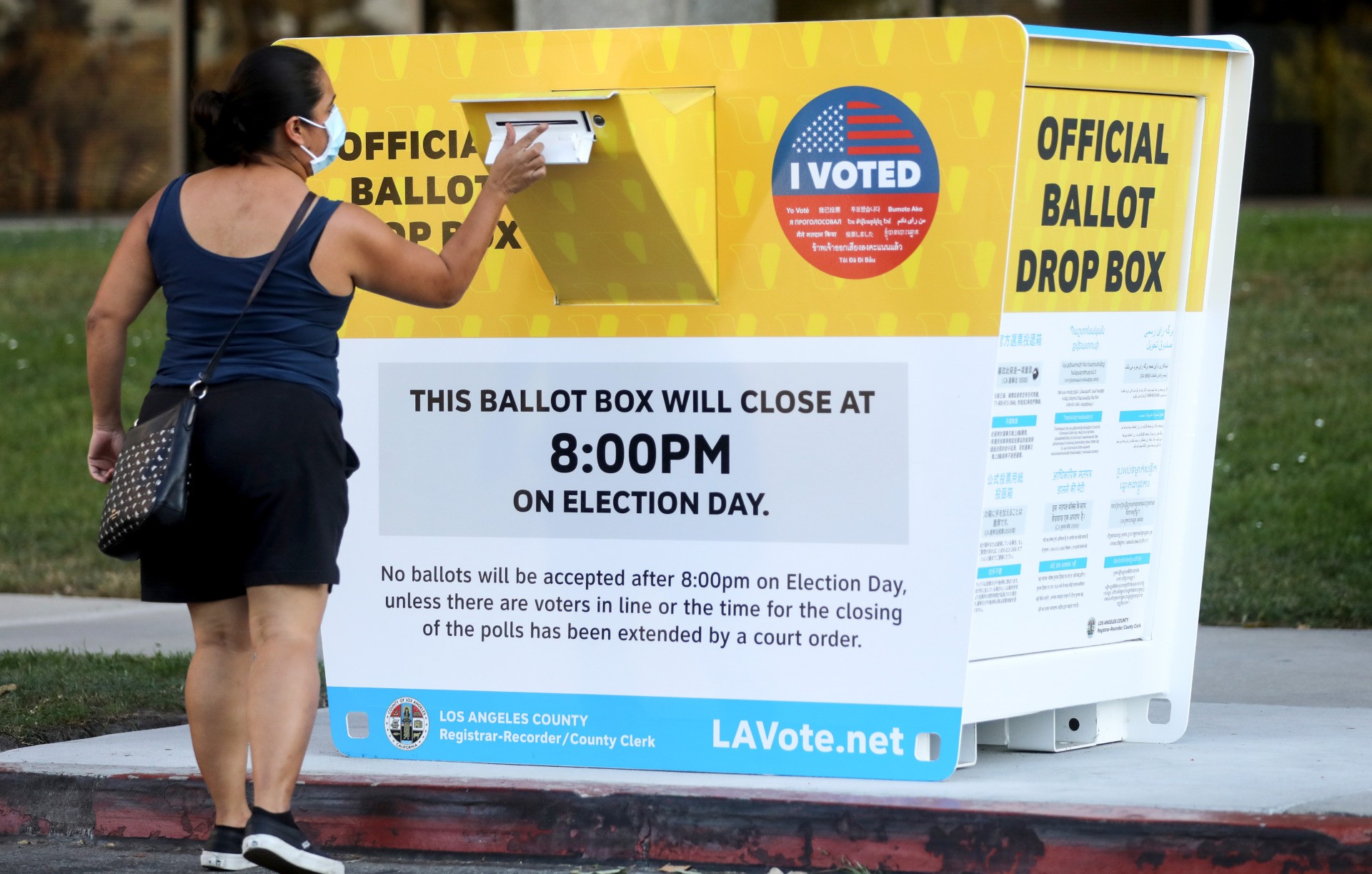 A voter places a ballot in an official mail-in ballot drop box outside of the L.A. County Registrar’s office ahead of Election Day on October 14, 2020, in Norwalk, California. (Mario Tama/Getty Images) 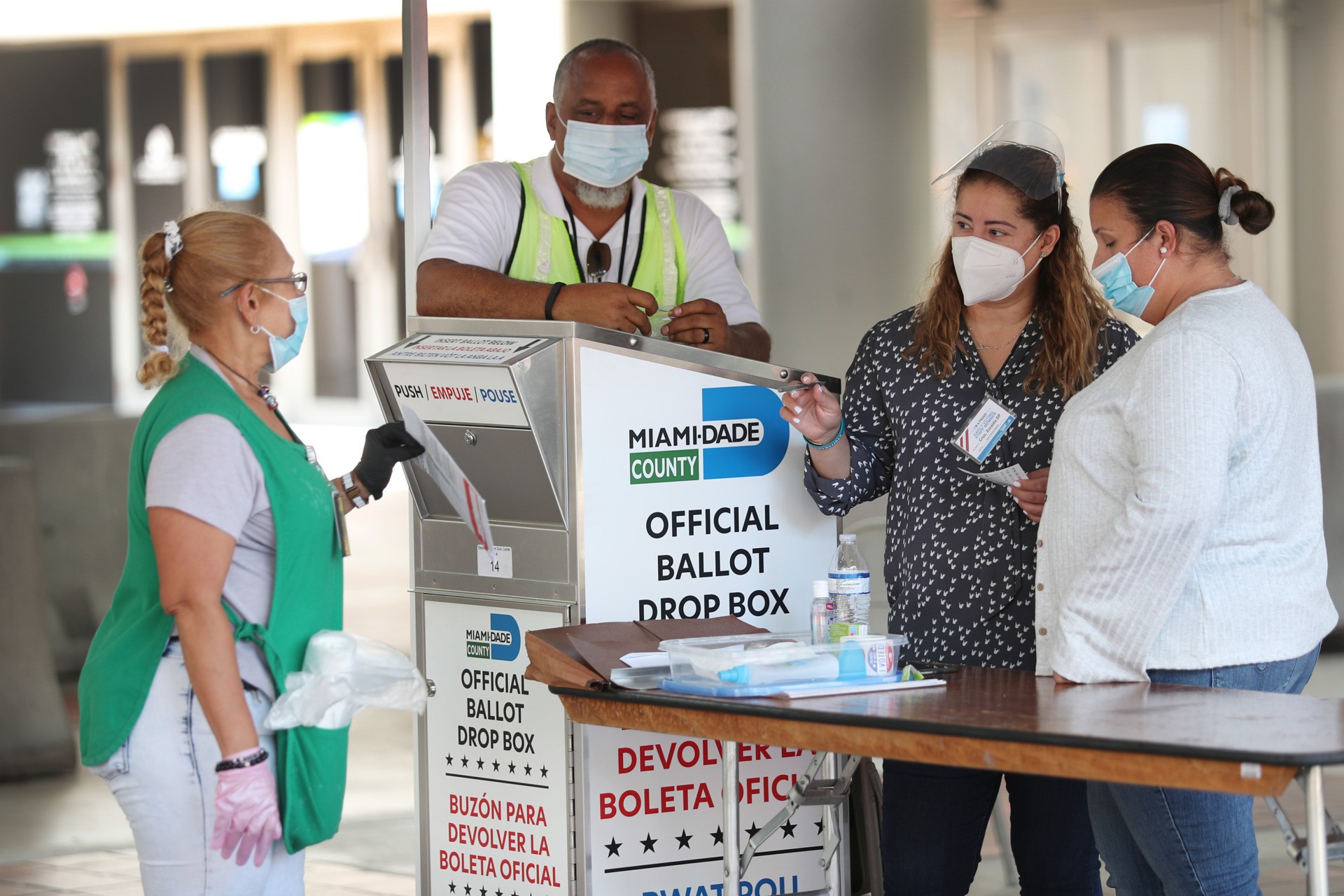 Instead, Republicans should learn from Stacey Abrams. Or, if they want to look further back in history, they should learn from one of Trump’s favorite presidents, Andrew Jackson. Like Abrams, Old Hickory lost an election and then figured out how to win with new and additional voters.

Jackson, a war hero who had won elections in Tennessee, lost nationally when he ran for president in 1824. So what did he do?  He didn’t get mad; he got even by registering more voters.

After 1824, Jackson and his chief political lieutenant, a Yankee named Martin Van Buren, spent four years pressuring legislatures across the then-24 states of the Union to expand the franchise—mostly by easing property requirements for voting, thereby granting voting rights to most white men over the age of 21. As a result, what became known as Jacksonian Democracy changed America, empowering “rustics” in the West (in those days, the West was frontier states such as Louisiana and Missouri).

As a result, Jackson powered himself to a smashing victory in 1828. Total voter turnout nationwide more than tripled.

That’s the way you win. You get more votes. Nothing else works. Not watching TV, not spouting, not tweeting, not anything else not directly connected to getting the most votes.

Of course, in our time, a key part of GOTV is the use of big data, so as to help keep track of the 80 million or more Republicans we’ll need to win a majority. And if we don’t trust Silicon Valley—and we shouldn’t—well, we’ll just have to build our own platforms for politicking.

Some pessimists will say, of course, that vote fraud makes it daunting for Republicans to win. Yet the case of Rep. Claudia Tenney proves that with a gutsy candidate, the GOP can claw its way back to power.

Tenney was first elected to her upstate New York district in 2016, but then lost in the 2018 blue wave. Yet she didn’t give up; just this month, more than three months after Election Day, she was finally declared the winner by barely more than 100 votes.  Welcome back, Claudia! You and your gumption have proven that it’s possible for Republicans to out-organize and out-hustle Democrats.

Also, of course, in another blue state, California, the GOP just won back four House seats that they had lost in 2018 after the Democrats in the Golden State out-maneuvered them with the then-recently legalized practice of ballot harvesting. So we can see: For every trick the Democrats have, Republicans can develop a counter-strategy and win. It’s hard work, to be sure, and for some, it’s less “fun” than simply moping and whining, but for most, it’s better to win than to lose.

In fact, as Breitbart News reported, the GOP came within 31,751 votes of winning a national House majority in 2020; so we can see, we have some effective techniques for the 2022 midterms; we just need to refine them further.

Looking ahead, if Republicans want to elect a 47th president in 2024, we could indeed learn from the 7th president. And if we want to win back places like the Peach State, we could borrow from Abrams’ playbook by getting our people to vote—in person, by mail, whatever it takes.