Senate Democrats complained Wednesday that Senate Republicans are holding the economy and the debt limit “hostage.”

Senate Minority Leader Mitch McConnell (R-KY) said Tuesday that Republicans will not support raising the debt ceiling, a move that could grind Democrats’ infrastructure push to a halt. The debt ceiling expires at the end of July, meaning that the Democrat majority will first have to tackle the debt limit before trying to pass trillions of dollars of infrastructure and social spending.

Sen. Elizabeth Warren (D-MA) said, “The Republicans are trying to extract something, and say that their leverage is they will have the United States default on its legal obligations, which is fundamentally wrong.” 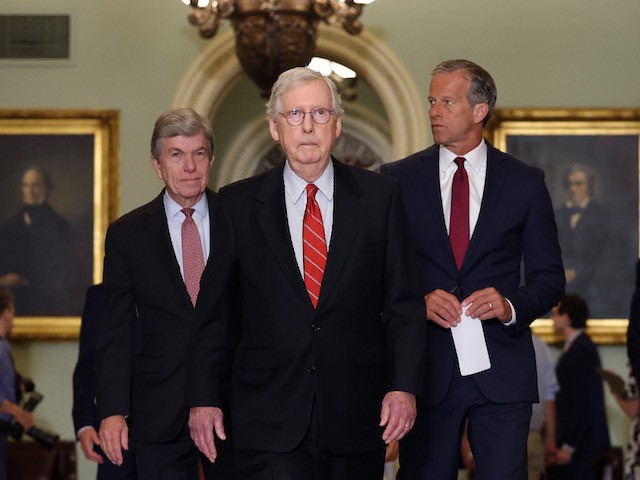 Sen. Lindsay Graham (R-SC) said that he could back an increase in the federal debt limit if it were tied to setting up a commission to secure the stability of Social Security and Medicare, along with other reforms. He said during a press conference Wednesday that he will discuss the proposed compromise next week.

Senate Majority Leader Chuck Schumer (D-NY) will need at least ten Senate Republicans to pass a bill that would address the debt limit; however, McConnell said he does not believe that any Senate Republican could support such a measure.

This means that Democrats would likely have to include a provision in the $3.5 trillion infrastructure reconciliation, which could further complicate Schumer’s wrangling of his majority.

Democrats claimed Republicans set up a double standard with the debt limit, alleging Republicans did not blink to raise the debt limit when then-President Donald Trump worked to pass the Tax Cuts and Jobs Act.

“When Donald Trump was president, they made sure everything happened,” Wyden said. “Now we have Covid [Chinese coronavirus] debt; we have Trump debt; we’ve got a double standard.”