Former President Donald Trump explained in a statement Thursday the order in which President Joe Biden should have conducted the Afghan withdrawal: get all Americans out first.

Trump’s critique of Biden’s withdrawal underpins the unknown amount of Americans still trapped in the collapsed country since Sunday. Estimates have ranged from 10,000 to 40,000, with the Associated Press reporting Thursday 15,000 Americans are stranded. The United States has evacuated only about 2,900 Americans since Sunday. Russia has offered to evacuate Afghans. 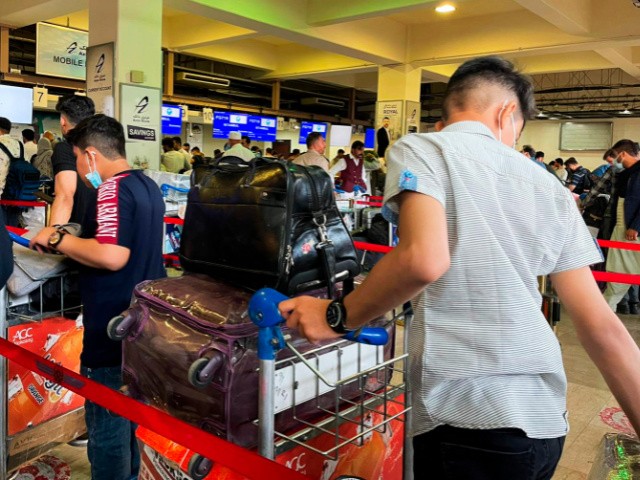 Passengers trying to fly out of Kabul International Airport amid the Taliban offensive wait in line in Kabul, Afghanistan, Friday, Aug. 13, 2021. As a Taliban offensive squeezes in on the gates of the Afghan capital, there’s increasingly only one way out for those fleeing the war and one way in for the U.S. troops tasked with backing the American diplomats still on the ground: Kabul’s international airport (AP Photo/Tameem Akghar).

Breitbart News reported Wednesday the U.S. embassy in Kabul announced a “first come, first serve basis” for flights out of the country at the airport surrounded by the Taliban. “Please be advised that a significant number of individuals have registered and space on these flights is available on a first come, first serve basis,” the notice reads. “You may be required to wait at the airport for a significant amount of time until space is available.”

Secretary of Defense Lloyd Austin has stated nearly 4,500 American troops are protecting the airport, while the State Department evacuates those trapped amid the chaos and increased brutalization by the Taliban within the country:

An Afghan man sent me this video which he said was raked outside Kabul airport today. How are Americans and Afghans supposed to get through this? pic.twitter.com/PjRTvof5p5

The New York Times reported Thursday Taliban terrorists are “intensifying” their searches for individuals “they believe worked with U.S. and NATO forces, including among the crowds of Afghans at Kabul’s airport.” The Taliban has said it will “kill or arrest their family members if they cannot find them”

Meanwhile, a Washington Post columnist tweeted that Biden left so much military equipment behind in the country that he gave the Taliban an air force:

"Among the items seized by the Taliban are Black Hawk helicopters and A-29 Super Tucano attack aircraft."

Great, we gave the Taliban an air force.https://t.co/cn6bhfDHRc

From 2003-2019, the American taxpayer sent the following to Afghanistan:

And as of June 30, 2021, Afghanistan “had 211 U.S.-supplied aircraft in their inventory,” the Hill reported.
Follow Wendell Husebø on Twitter @WendellHusebø.