President Joe Biden is struggling Friday to evacuate all Americans from Afghanistan before the August 31 deadline. Extending the deadline would require “the Taliban’s acquiescence,” according to the Associated Press (AP).

“At the current rate it would be difficult for the U.S. to evacuate all of the Americans and Afghans who are qualified for and seeking evacuation by Aug. 31,” the AP reported about the thousands of Americans still stranded in the country since Sunday facing “armed Taliban checkpoints to paperwork problems.”

The Pentagon also “declined to say whether Defense Secretary Lloyd Austin had recommended to Biden that he extend the Aug. 31 deadline. Given the Taliban’s takeover of the country, staying beyond that date would require at least the Taliban’s acquiescence.”

A source tells me, “Situation [in Afghanistan] is rapidly deteriorating… We’ve had Americans get beaten throughout the night.” One of them, an American woman, was beaten “twice” even though she was carrying a U.S. passport.

“I think it is just a fundamental fact of the reality of where we are, that communications and a certain measure of agreement with the Taliban on what we’re trying to accomplish has to occur,” Pentagon spokesman John Kirby said Thursday.

Kirby also said the military has the capacity to remove 5,000 to 9,000 per day but has only evacuated about 2,000 passengers “each of the past two days.” Just 1,762 American citizens and Green Card holders have been lifted from the country since August 14.

“I don’t know,” Kirby responded to a reporter who asked how many “American citizens” are stranded in Afghanistan. Though the White House claimed Tuesday the “self-identified” number of Americans in the country is about 11,000, Friday they walked the claim back to an unknown amount:

On Thursday, the AP reported 15,000 were trapped. As America struggles, Russia has offered to evacuate Afghans, while the French are running operations to rescue foreign nationals in the city outside their embassy. 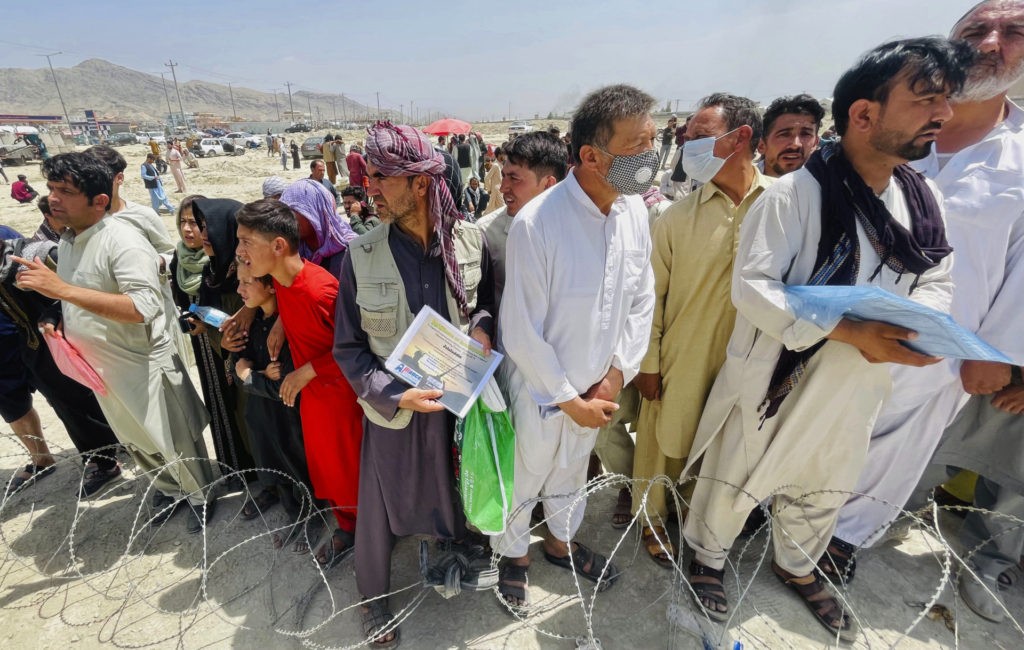 A man holds a certificate acknowledging his work for Americans as hundreds of people gather outside the international airport in Kabul, Afghanistan. (AP Photo)

Former President Donald Trump explained in a statement Thursday the order in which President Joe Biden should have handled the Afghan withdrawal.