Rep. Lauren Boebert (R-CO) delivered a blistering speech Tuesday in which she called for the impeachment of President Joe Biden, Vice President Kamala Harris, and Secretary of State Antony Blinken over the disastrous U.S. exit from Afghanistan.

Boebert spoke alongside fellow members of the House Freedom Caucus at a press conference aimed at demanding House Speaker Nancy Pelosi (D-CA) call Congress back from recess to vote on impeachment and resignation resolutions.

“It is time for action,” Boebert said. “Impeach Biden, impeach Kamala Harris, and throw in the secretary of state if you can get him back from vacation,” she added in reference to the Washington Post timeline that revealed Blinken was away at the Hamptons the Friday before Afghanistan’s government collapsed.

Reps. Andy Harris (R-MD) and Ralph Norman (R-SC) introduced articles of impeachment last week against Blinken for his role in the U.S. troop withdrawal from Afghanistan, which concluded Monday, just days after a deadly terrorist attack outside the Kabul airport.

Last Thursday, two explosions outside the airport killed more than 100 people, including 13 U.S. servicemembers, and injured many others, according to Afghanistan’s Tolo News. The explosions came after reports of tense and violent encounters outside the airport with the Taliban, the terrorist group that toppled Afghanistan’s government in a fast-paced takeover less than two weeks prior to the blasts.

Harris and Norman’s impeachment resolution contended, among several charges, that Blinken ignored a July 13 warning, reported by the Wall Street Journal, that the U.S. should begin evacuation flights sooner than planned amid the Taliban gaining strength in Afghanistan. 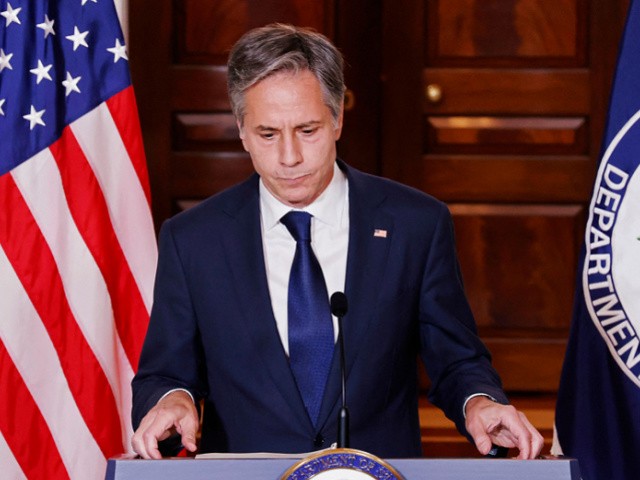 Secretary of State Antony Blinken delivers remarks following talks on the situation in Afghanistan, at the State Department in Washington, DC, on August 30, 2021. (JONATHAN ERNST/AFP via Getty Images)

Boebert in her remarks on Tuesday evoked the message of now-Gold Star father Steve Nikoui, a California carpenter whose son Lance Cpl. Kareem Nikoui — a U.S. Marine — was killed in last week’s attack. Nikoui told Fox News’s Tucker Carlson on Friday that the U.S. evacuation scene he saw unfolding at the Kabul airport, where his son had been serving, appeared “chaotic” and “not really planned out.” In an interview with the Daily Beast, the grieving father said that “Biden turned his back on” Kareem.

“The father of one of our fallen soldiers said, ‘Hey, I’m just a carpenter, and even I can figure out how horrible this exit strategy was,’” Boebert said. “We all know that we needed to leave Afghanistan, and we all see how failed this mission was. He’s right, and you know it. His son did not deserve to die.”

In addition to the impeachment resolution against Blinken, Republicans introduced resolutions calling on Biden, Secretary of Defense Lloyd Austin, and chair of the Joint Chiefs of Staff Gen. Mark Milley to resign.

The Freedom Caucus members have also called on House Minority Leader Kevin McCarthy (R-CA) to file a motion to “vacate the chair,” or remove Pelosi as speaker, assuming Pelosi does not meet their demand and call Congress back into session early to vote on the proposed impeachment and resignation resolutions.