A judge ordered the rearrest of Doug Jensen, one of the protesters charged with entering the Capitol on January 6, after “pretrial services officers” made an unannounced visit to his home in Des Moines, Iowa, and found him watching an online discussion featuring MyPillow CEO Mike Lindell.

Jensen, who is charged with seven counts, including aggravated assault, obstruction of a law enforcement officer during a civil disorder, unlawfully entering a restricted building while carrying a dangerous weapon, and disorderly conduct, was jailed for six months while he awaited trial. Authorities said he was carrying a knife when he was arrested.

On July 13, U.S. District Court Judge Timothy Kelly released Jensen, with strict conditions, including the prohibition of using the Internet and his cell phone.

The judge said he released Jensen after the man told him he had had an epiphany and no longer believe in the controversial QAnon ideology.

“It’s now clear that he has not experienced a transformation and that he continues to seek out those conspiracy theories that led to his dangerous conduct on Jan. 6,” Kelly, who ordered Jensen arrested at a hearing about the issue on Thursday, said.

“I don’t see any reason to believe that he has had the wakeup call that he needs,” Kelly said.

The left-wing Associated Press (AP) described what Jensen was listening to on his phone as “false conspiracy theories about the presidential election” and vilified the Rumble website as “a streaming platform popular with conservatives.”

Jensen acknowledged that he had earlier watched two days of the cyber symposium sponsored by MyPillow CEO Mike Lindell, an ally of former President Donald Trump who used the event to push false theories that the presidential election’s outcome was changed by Chinese hackers.

Kelly said it was unlikely that Jensen would be able to follow any other conditions of release barring internet use and that he had lost confidence in Jensen’s wife to serve as his third-party custodian. Prosecutors contended that she had facilitated his violations by leaving the phone on when she left for work: 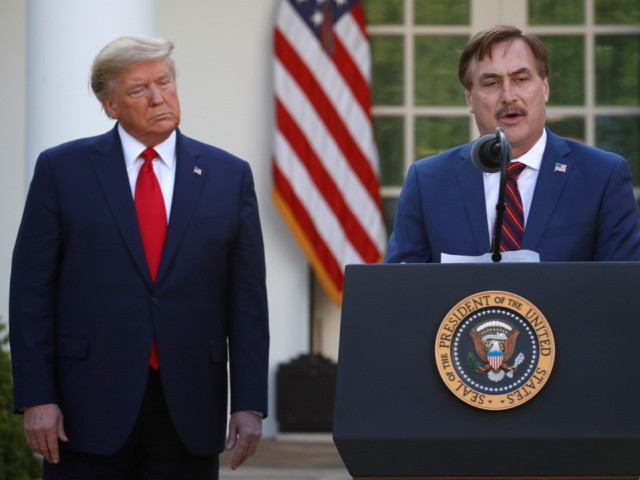 In this March 30, 2020 file photo, My Pillow CEO Mike Lindell speaks as President Donald Trump listens during a briefing about the coronavirus in the Rose Garden of the White House, in Washington. Lindell, an avid supporter of President Donald Trump, who has continued to push the notion of election fraud since Trump lost to Joe Biden in the presidential election in November, said his products will no longer be carried in the stores of some retailers, including Bed Bath & Beyond and Kohl’s (AP Photo/Alex Brandon, File).

According to the AP, Jensen’s attorney, Christopher Davis, called it “Orwellian” that the government would jail a man for sitting in his garage listening to an online program.