A 130-year-old statue of Civil War General Robert E. Lee that dominates a traffic circle in Richmond, Virginia, will fall Wednesday. The demise of the largest extant Confederate monument in the United States draws to a close a series of protracted legal challenges that began more than a year ago when Gov. Ralph Northam ordered its removal.

“Virginia’s largest monument to the Confederate insurrection will come down this week,” the Democratic governor said in a statement. “This is an important step in showing who we are and what we value as a Commonwealth.”

As Breitbart News reported, the iconic statue weighs approximately 12 tons, stands 21 feet tall, and has been on a 40-foot pedestal for 130 years.

A string of lawsuits have been mounted over the years seeking to strike it down, however a deed signed in 1890 that gave Virginia control of the monument prevented its removal.

The nationally recognized, French-made statue became the epicenter of a protest movement in Virginia after the death of George Floyd.

A judge in Richmond, Virginia, on Monday temporarily blocked Gov. Ralph Northam’s order to tear down a statue of Confederate General Robert E. Lee that has towered over a traffic circle since it was erected 130 years ago. https://t.co/4x3sJBdxz7

William Gregory, a descendent of the donating family, fought the removal. He argued original deeds from more than a century ago stated the state agreed to view the monument and the ground it stands upon as “perpetually sacred.”

Now that notion has been overturned after the Virginia Supreme Court ruled last week in the state’s favor and approved the statue’s demolition, UPI reports.

In its unanimous ruling, the court said there was no evidence in the original deeds made with the state showing that he had any ownership interest in any land concerning the statue, “[t]hus, he has no property right related to the Lee monument,” allowing for it to be torn down.

The statue, erected in 1890, will be placed in storage until a decision has been made on what to do with it as well as the protest graffiti which has gathered over the base in the past year.

“We are taking an important step this week to embrace the righteous cause and put the ‘Lost Cause’ behind us,” Richmond Mayor Levar Stoney said, according to UPI. 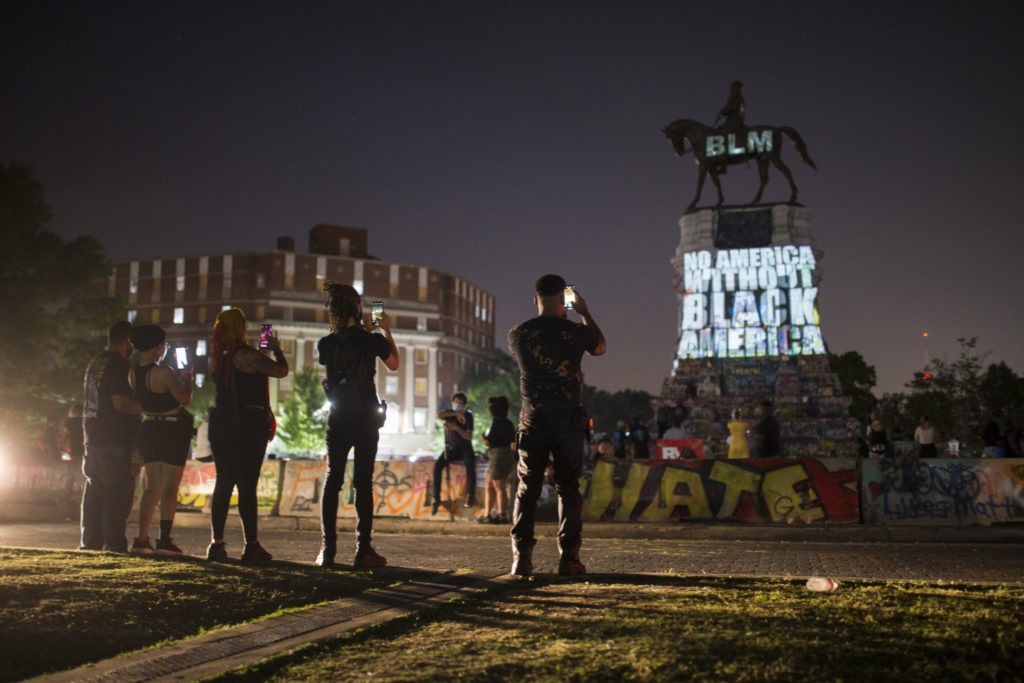 Richmond residents spent the night listening to music, eating food and watching projections on the Robert E. Lee Monument on July 4, 2020; Protesters renamed the area the Marcus-David Peters Circle, after the Black man killed by police during an interaction while Peters was experiencing a mental health issue. (Scott P. Yates/Rockford Register Star via USA TODAY NETWORK)

“Richmond is no longer the capital of the Confederacy. We are a diverse, open and welcoming city, and our symbols need to reflect this reality.”

The statue is expected to be cut into pieces for transport to an undisclosed storage site, AP reports, while the Northam administration has promised to seek public input on the statue’s future.

For now, the empty 40-foot pedestal will keep standing amid efforts to rethink the design of Richmond’s Monument Avenue.