Rep. Jody Hice’s (R-GA) office received several delayed and generic responses from the Biden administration’s State Department when it sought urgent assistance from the department for a group of Afghan allies, some of whom had served in critical roles aiding U.S. military during the Afghanistan War.

Among the myriad inquiries Hice’s office received on behalf of American citizens and allies desperate to leave Afghanistan after the collapse of its government in mid-August was a request from this particular group, comprised of 25 Afghans, the congressman’s office told Breitbart News.

Hice’s team had been among several in Congress fielding calls and emails from either people in touch with those in Afghanistan needing evacuation assistance or the evacuee hopefuls themselves.

Guidance during the roughly three-week period from the State Department seemed entirely out-of-touch with the reality on the ground, explained Tim Reitz, Hice’s chief of staff.

“All of the information we sent to State really just went into a black hole,” Reitz said of the countless calls and emails his office directed to the department.

Breitbart News obtained and reviewed more than 20 emails between the Hice office and the State Department and U.S. Central Command related to the one particular instance of the 25 Afghans, a group comprised of seven Special Immigrant Visa (SIV) applicants and their family members, including multiple small children and babies.

The emails from the State Department reveal days-long lag times for substantive responses, and even then, the responses were not tailored to address the specific group of 25.

Six of the seven SIV applicants had worked as interpreters for U.S. forces. They were informally classified in emails at times as “high value individuals” because they had aided U.S. military generals, served as translators for conversations of sensitive national security-related matters, or, in one instance, had been a lifesaving asset to a U.S. servicemember.

“If the Taliban had a list, they would be at the top of it,” Reitz said, explaining the SIV applicants feared for their safety because of their U.S. military associations. 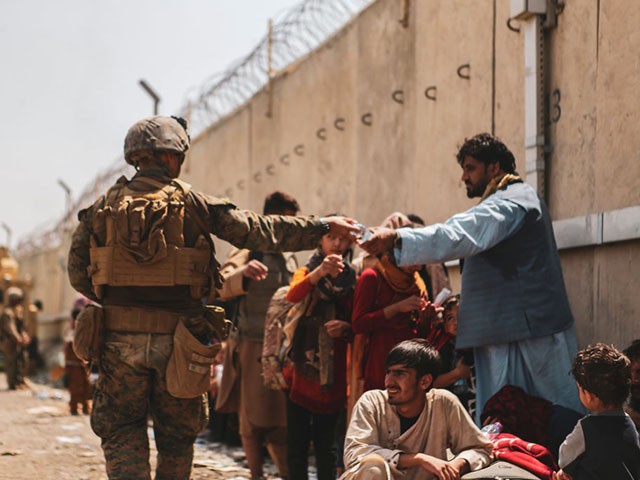 A U.S. Marine with the 24th Marine Expeditionary unit passes out water to evacuees during the evacuation at Hamid Karzai International Airport on August 21, 2021, in Kabul, Afghanistan. (Isaiah Campbell/U.S. Marine Corps via Getty Images)

The Taliban had toppled Afghanistan’s government on the weekend of August 14. While Taliban leaders have vowed they are seeking peaceful relations with other countries, the group has a well-documented history of terrorist activity, including retaliatory violence and killings.

Reitz said the group of 25 had heard about “a small window of opportunity” at a gate at the Kabul airport, where the U.S. military had confined its evacuation mission.

“This group moved there in hopes they could also get in. … The gate was closed shortly after they arrived over security concerns,” Reitz stated. “Through the evening of August 27, our office contacted every resource we could think of to try to get them into the base — CENTCOM, SOCOM, State Task Force, etc.”

“They were inches from U.S. military personnel and still refused entry no matter how much noise our office and others made,” he said.

Initial requests from Hice’s office are below, both sent Friday evening, August 27. The first email has been cropped to exclude the list of the 25 individuals’ names and descriptions for security reasons:

Still unsuccessful at moving the group of 25 through an airport gate, Hice’s office sent two more inquiries, on the morning and early evening of Saturday, August 28 — both times directly to two State Department individuals the Hice team had heard were on the ground in Afghanistan — reiterating Hice’s Friday evacuation request.

The State Department responded only to the second request, writing, “Thank you for your email. I’ve forwarded your email to a team on the ground. I understand this situation is urgent and from several hours ago. We are working around the clock to help as many Afghans at risk as possible”: 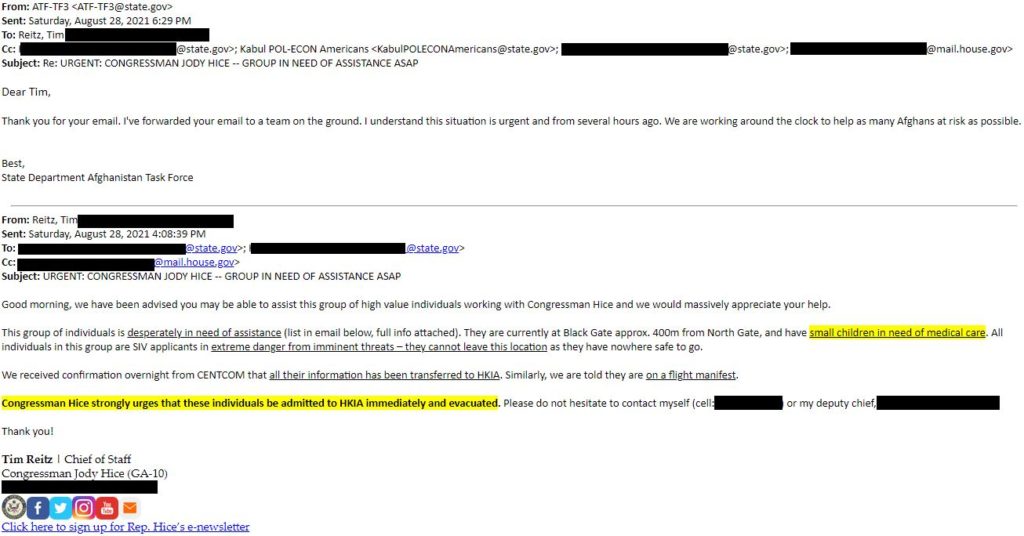 Hice’s team noted in both of its Saturday requests “small children in need of medical care,” which Reitz said was in reference to information his team had that at least one of the children was showing signs of heat stroke.

On Sunday, the day before the final U.S. troops withdrew from Kabul, the Hice team began exploring overland options, specifically looking into whether the U.S. Embassy in Uzbekistan could assist with a border crossing for this case.

Reitz was passed around by phone on Sunday to about four State Department employees and was eventually told to put his inquiry about Uzbekistan into writing, which he did on Sunday at about noon.

The chief of staff said of the multiple phone inquiries, “It was like no one [at State] had even thought of the idea — or, maybe more accurately, no one had given the task force guidance on how to respond to congressional offices to explain that State would do nothing.”

An initial brief response from the State Department came within minutes:

The follow-up response, which included an attached rejection letter to Hice stating the embassy “is unable to facilitate travel for Afghan SIV applicants” and that “Uzbekistan officially closed its land border with Afghanistan on August 30, 2021” was sent more than three days later:

Separately, the Hice team received multiple generic emails — responding to its inquiries from Friday, August 27 — during the week of August 30, after flight possibilities had been eliminated.

One email stated the State Department took the inquiries “very seriously,” was processing them “as quickly” as it could, and was “working around the clock to assist as many people as possible in Afghanistan”:

Another email stated one of the multiple Afghanistan task forces that had been created was “working intensively” with other entities on behalf of at-risk Afghans. The task force suggested specific cases call the National Visa Center Monday through Friday:

Yet another email showed the State Department forwarded the Hice team’s request Saturday, August 28, midday to an email address designated for congressional responses, but the actual reply came more than five days later, in which the department informed Hice’s office, “We understand the seriousness of the situation and appreciate that you have highlighted these cases for us.” The department then went on to provide generic instructions for applying for an SIV or other designation: 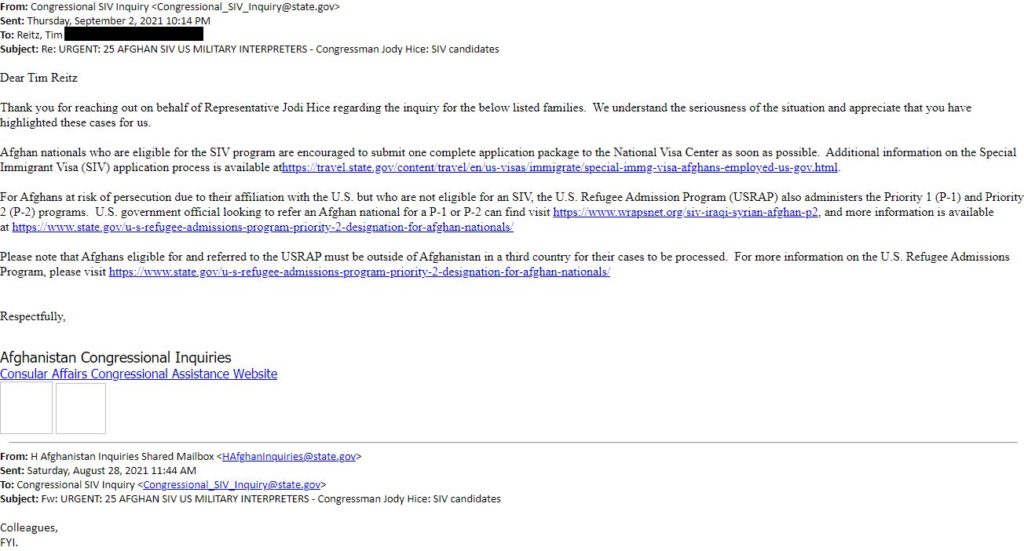 “Ultimately, this group never made it onto HKIA [the Kabul airport]. They split into several smaller groups to make their way north to Uzbekistan or Tajikistan. That’s the last we’ve heard from them,” Reitz stated earlier this week.

The case of the 25 was one of many — some ending in success, some still ongoing, and some losing contact — that Hice’s office worked with or is continuing to work with. The office is still receiving new inquiries.

Asked why his office ended up operating as one of the seemingly go-to offices for those in Afghanistan — alongside other offices in Congress like those of Sen. Tom Cotton (R-AR), Rep. Dan Crenshaw (R-TX), and others — Reitz explained that Hice had come into contact with certain active duty and veteran servicemembers in the U.S. who were so well-connected to those overseas that they essentially functioned as an informal “network” maintaining contact with those who were stranded.

Hice’s team, for its part, often felt forced to veer outside the State Department’s established channels to attempt to aid those seeking evacuation as his office coordinated with these military members based in the U.S. 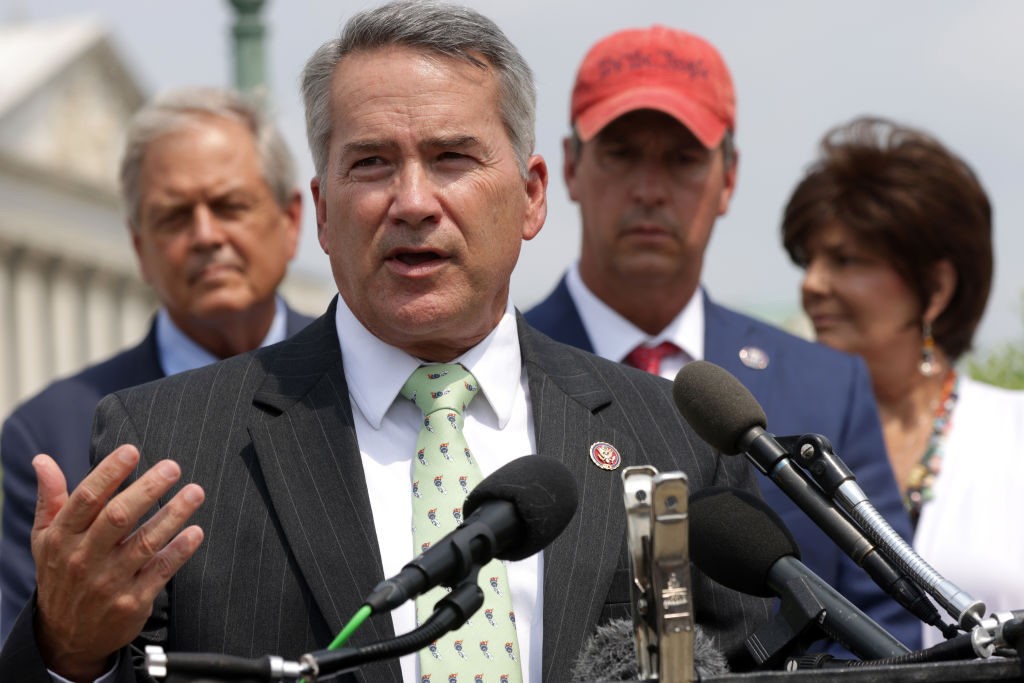 In a statement to Breitbart News about his experience attempting to coordinate with the State Department, Hice said, “The shocking incompetence and ineptitude by the U.S. Department of State throughout the botched Afghanistan evacuation repeatedly failed Americans and our allies alike.”

Hice added, “The agency was completely unprepared for the predictable flood of people desperately trying to flee horrific fates at the hands of the Taliban. My office and I found time and time again that when minutes counted, State took days to respond — and when the responses eventually came, they were wildly unhelpful and totally ineffective even in the most urgent cases.”

Breitbart News reached out to the State Department press office for comment on the communication lags. The department replied, “As a general matter, we do not comment on communications with Congress.”