NEWBERRY, Florida — Florida Gov. Ron DeSantis (R-FL), flanked by city workers, first responders, and fellow Republican politicians on Monday, vowed to fight against the Biden administration’s vaccine mandates and said they are making it “very clear” they will protect Florida’s jobs. Ultimately, DeSantis said, governors such as himself are constitutionally designed to “be on the front lines of pushing back when the federal government, particularly the president, is overreaching.”

“We’re here today to make it very clear that we’re going to stand for the men and women who are serving us. We’re going to protect Florida jobs,” DeSantis said to mass applause Monday morning: 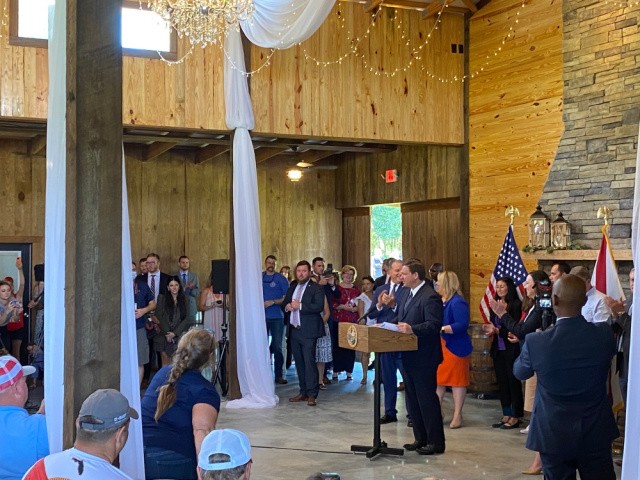 Ron DeSantis speaks in Newberry, Florida, on September 13, 3021, and vows to fight against vaccine mandates threatening to cost people their jobs in Florida (Breitbart News/Hannah Bleau).

First responders have worked “the whole time” throughout the pandemic “while a lot of these politicians were on Zoom and not going out or doing anything,” he said, garnering a “Preach!” from an enthusiastic audience member.

We cannot let those individuals be cast aside or let their livelihoods be destroyed over the vaccine mandates, which could force them out of their jobs, DeSantis continued.

He brought up places such as the city of Gainesville, “which basically said, ‘We are going to fire you unless you take a vaccine.'” Many first responders, in particular, he added, have already been exposed to the Chinese coronavirus, recovered, and have “very strong immunity” as a result. So the local mandates, as well as Biden’s, do not account for that.

DeSantis reminded the crowd that Florida passed a law, SB 2006, which effectively bans vaccine passports, but he explained that the rule applies to government agencies.

“So if a government agency in the state of Florida forces a vaccine as a condition of employment, that violates the Florida law,” he said to applause: 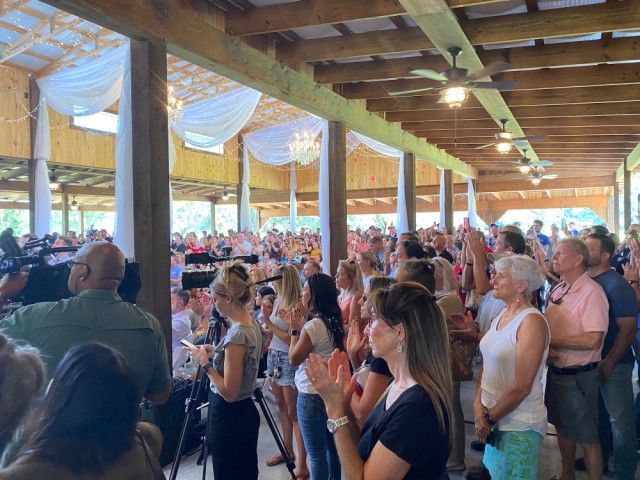 At the end of the day, DeSantis said their goal in Florida is to make vaccines “available for all but mandatory for none,” triggering applause yet again: 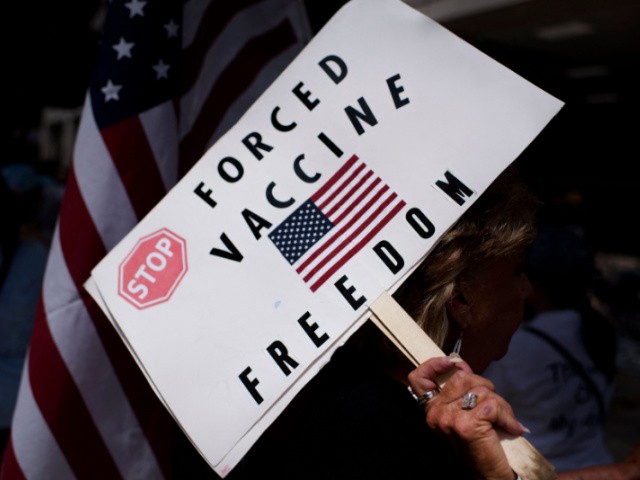 “It’s an important issue with these mandates,” he said, emphasizing that these intrusive mandates target those on the front lines.

“And you just throw them out like they’re chopped liver. That’s just fundamentally wrong,” he said before introducing speakers who are in “very difficult” situations due to these vaccine mandates, which DeSantis described as “very intrusive.” He added that he thinks it is also an “illegal policy.”

One speaker, who risks losing his pension, emphasized it is not about the vaccines themselves, but “mandatory vaccination.”

Christine, a Gainesville city worker and Marine Corps veteran, also shared she could lose her job because of this mandate, repeatedly using the phrase “my body, my choice,” garnering applause and cheers from the crowd.

Speakers emphasized they are “not anti-vaccine,” stating, “We are anti-mandate.”

“I don’t support mandates at all, but if you’re doing a mandate based off this, if you’re really following science, you would acknowledge this natural immunity, and instead, they ignore it and force someone who already has protection to take a medical treatment they may not like,” DeSantis chimed in.

“It’s really about using government power, control, to mandate much more than it is about the underlying medical issues that are involved,” DeSantis continued before introducing an Orange County firefighter who spoke about the mandates and the effect it is having on her life.

The first responder, Maria, revealed that both she and her husband, who also works in public safety, have had the coronavirus and thereby have natural immunity. Yet they could lose their jobs for refusing the vaccine.

“Once we give up our rights to choose, when will it end?” she asked.

DeSantis acknowledged that point, noting it is essentially a “rolling mandate, potentially” because of the talk of booster shots.

Asking if the government will impose ultimatums if Americans refuse booster shots down the road, just as it is now doing with vaccine mandates, DeSantis said:

Biden’s administration came out and said, “We’re going to boosters on a specific day,” but it had not been studied by the FDA. The two top officials resigned because they felt this was…Can you imagine if Trump had unilaterally set a date for FDA without having underlying data? I mean, the corporate press would have a meltdown. I mean, it would be wall-to-wall hysteria about him perverting science and not following experts.

“It’s not constitutional what he’s doing,” DeSantis said of Biden’s vaccine mandate, questioning why Biden’s administration is not applying the mandate evenly, requiring it of private sector businesses but exempting the post office, members of Congress, and their staff.

“This is all political. It’s all about using government, and it’s wrong,” he continued, noting that this will exacerbate staff shortages, particularly in hospitals, and have a “hugely negative” impact on people’s jobs and on vaccinated people as well. They would see “key things” in society disrupted, he warned.

“Suffice it to say, nobody should lose their job over this issue,” he said before noting that state Attorney General Ashley Moody (R), who was in attendance, filed a brief for the case in Gainesville, calling the vaccine requirements “unlawful”: 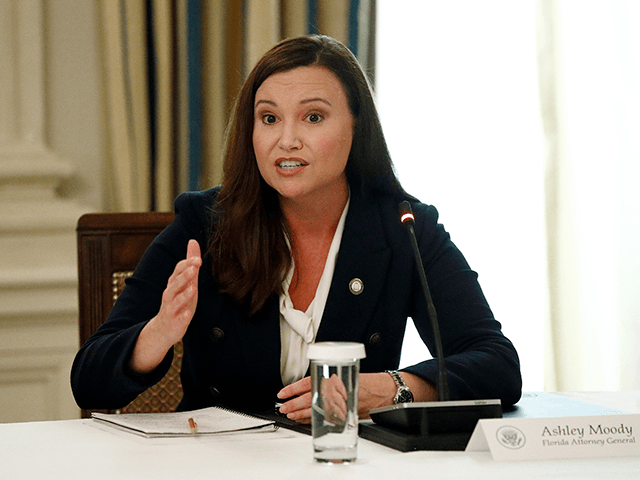 “The president doesn’t just get to boss people around. That is not the way our Constitution works.  Governors like me are designed to be on the front lines of pushing back when the federal government, particularly the president, is overreaching,” he said before blasting Biden:

“For him to be so dismissive and act like that anybody standing up for jobs in their state should just somehow get out of the way, it shows the arrogance of him, and it also shows how out of touch he is with people in this country. These jobs matter. These livelihoods matter. Their families matter, and they shouldn’t be coerced out of a job through government power,” he said, predicting they will ultimately be successful in this fight.