U.S. President Joe Biden appeared to forget who he was talking to Wednesday night when he looked away from his prepared notes for just a few seconds and addressed Australia’s Prime Minister Scott Morrison as “that fella down under.”

The verbal fumble came during an exchange between the two leaders and UK Prime Minister Boris Johnson detailing a defence deal struck by the long standing allies to help Australia acquire nuclear-powered submarines.

“Thank you Boris (Johnson) and I want to thank uh… that fella Down Under,” Biden said as he turned to the large screen Morrison was on.

“Thank you very much pal… appreciate it prime minister.”

The Australian leader simply smiled back politely and gave a thumbs up.

Biden said “I wanna thank that fella down under” after thanking UK Prime Minister Boris Johnson.

Social media users cringed at the exchange before describing Biden as “hopeless,” “embarrassing” and not up to the demands of the job.

Joe Biden is just an old duffer, he’s not up to the job.

US President Joe Biden has addressed Scott Morrison as “pal” and “that fellow down under” after appearing to forget the name of Australia’s national leader in a joint defence address.https://t.co/3Uip8z9I8F

This may be the first time in history that the United States has headed into a major geopolitical conflict with a president who can't remember the name of his axis powers.#THATFELLOWDOWNUNDER #Biden #AUKUS

As Breitbart News reported, the press conference was called to make public the new three-nation security pact – called AUKUS – involving Australia, the U.S. and the UK.

The new a new trilateral security partnership will see both the UK and U.S. combine to help Australia build a new fleet of nuclear submarines.

Morrison said the next 18 months would include “an intense examination of what we need to do to exercise our nuclear stewardship responsibilities here in Australia.”

AFP reports nuclear power has been highly controversial in Australia and Canberra formally banned the use of nuclear energy in 1998, though the country has rich deposits of uranium. 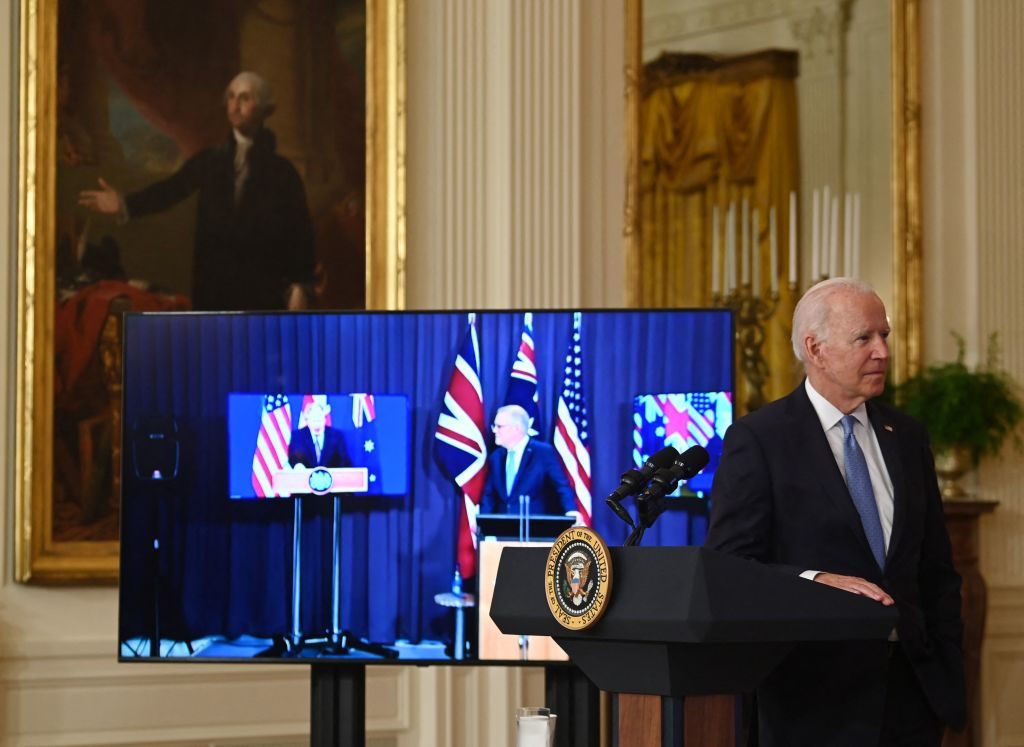 Morrison insisted Australia was “not seeking to establish nuclear weapons or establish a civil nuclear capability.”

“And we will continue to meet all of our nuclear non-proliferation obligations,” he added.

In a series of secret phone calls ahead of the public announcement, AFP reports Morrison reassured regional allies the decision was based on ensuring “security and prosperity in the Indo-Pacific.”

Neighbouring New Zealand however was quick to show its displeasure, with left-wing leader Jacinda Ardern saying the nuclear submarines would never be welcome in its national waters.