U.S. Agency for International Development (USAID) administrator Samantha Power agreed to speak at a gala later this month hosted by a think tank that listed a military-linked Chinese firm sanctioned by the American government as a sponsor until this week.

The event’s organizer — Inter-American Dialogue — claimed it cut ties with China Telecom Wednesday after first learning its status as an entity blacklisted by the Treasury Department when Politico inquired about its relationship with the state-run firm.

Moreover, an unnamed USAID spokesperson asserted that Power was unaware that the military-linked company owned by China’s ruling communist party was sponsoring the event when she agreed to attend, the news outlet reported Thursday.

“We were not aware of this sponsorship when the Administrator agreed to speak at the event and understand that this organization is no longer a part of the event,” the spokesperson told Politico. 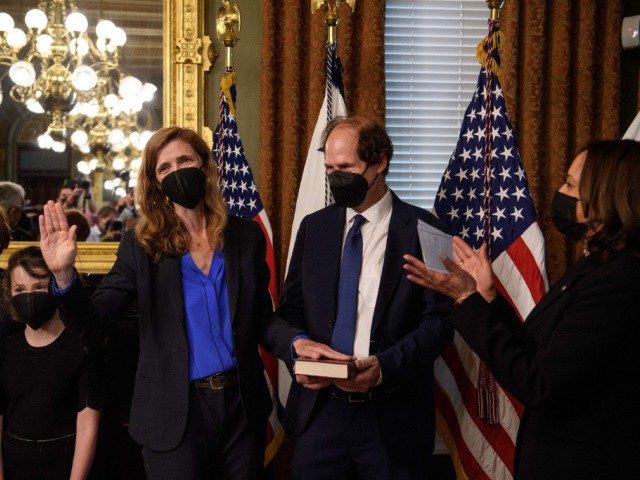 However, China Telecom indicated that it had yet to be informed by the Inter-American Dialogue of its canceled sponsorship.

Asked to comment on the firm’s response, Michael Shifter, the think tank’s president, insisted, “Earlier today we called China Telecom and informed them we were canceling the sponsorship. We will soon communicate the decision in writing,” adding:

The company became a gala sponsor on May 12, before it was sanctioned by Treasury. We were not aware that it had been sanctioned until today, when we immediately took action and canceled the sponsorship. The company is no longer a sponsor. The Dialogue absolutely does not accept sponsorships by [U.S.] sanctioned or blacklisted entities.

Shifter failed to mention that former President Donald Trump’s administration, concerned over national security, sanctioned China Telecom in November 2020, prohibiting Americans from investing in the company soon after the Pentagon identified it and 30 others as having links to it the Chinese military.

In June, the Biden administration reinstated that ban, charging the Treasury with administering it after doing away with the Pentagon’s list.